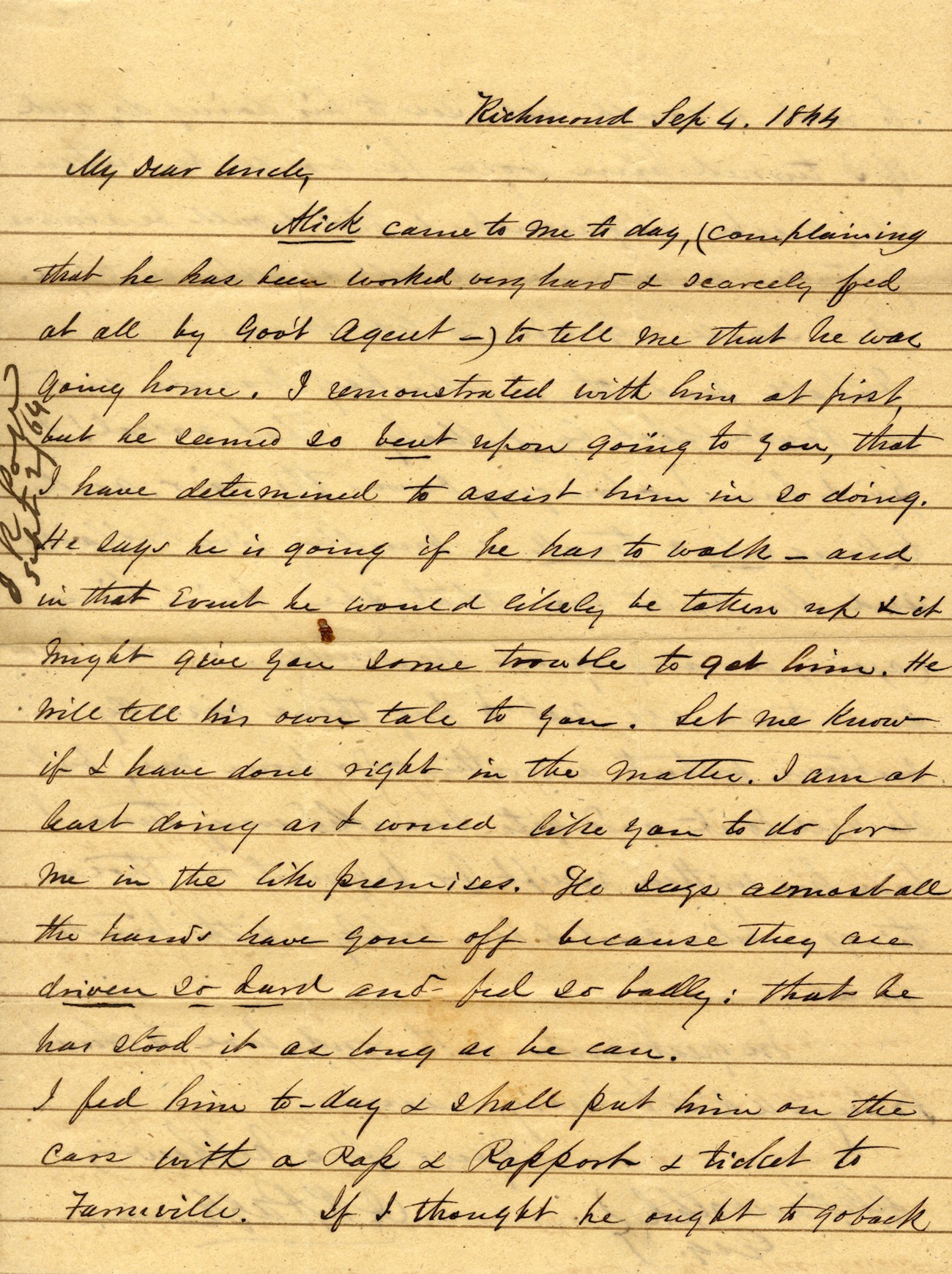 family papers of the Randolphs of Virginia

(SLAVERY.) RANDOLPH FAMILY. A collection of more than 100 letters and documents

More than 100 items, generally in very good condition. A detailed inventory is available.

The Randolphs were the most prominent and wealthiest family in 18th-century Virginia. Its members included Thomas Jefferson, John Marshall, Peyton Randolph, Edmund Randolph, and many others. The family’s prominence continued into the 19th century with Robert E. Lee and other notable politicians, military figures, and planters. This collection includes more than 100 letters and documents spanning nearly a century from one line of that family.

The archive begins with 14 documents by and about Isham Randolph (1771-1844), Thomas Jefferson’s first cousin. These papers includes a document relating to the hiring of an enslaved man, financial matters, and Randolph’s role as an officer of the James River & Kanawha Company, a failed canal project.

Most of the collection documents the activities of Isham Randolph’s son David Coupland Randolph (1804-1886) of Buckingham County and Richmond. Many of these papers involve Randolph’s purchases and sales of enslaved people, as well as their hiring. One of the first documents is an 1836 record of his purchased of an enslaved man named William for nearly $1000. In another letter Randolph’s mother reports family news, noting that the arrival of a new overseer “has done much for us in regard to the management of our servants, they keep pretty straight.” A few years later Randolph inherits his mother’s enslaved people. Her will, present here, observes “all of my negro slaves … all descendants of a slave bequeathed to me by my mother, Ann. Coupland by her last will and testament.” In the coming years Randolph sells some of these men, women, and children, but as late as 1859, on the eve of the war, he purchases another, a man named Peter, for $730.

The Civil War brought difficulties for the Randolphs and those they enslaved, producing extensive correspondence from Randolph’s agents concerning tobacco prices and the availability of goods and from his sisters on family matters and the progress of the war. At the height of the war, Randolph’s sister closes one letter, “Remember me to the servants.”

Many other letters highlight the food shortages and rampant inflation in Richmond during the Civil War. Less than a year after dozens of citizens were arrested for their participation in the 1863 Bread Riot in Richmond, Randolph’s associates write him: “Country people haven’t an idea of what town folks are suffering. We have serious notion of setting traps for rats. But fear they will be found too poor to make good stews—there being nothing for them to go upon.” When food was available, it was prohibitively expensive. An 1864 letter mentions Randolph’s sale of butter for a staggering $11 per pound.

Letters from Randolph’s family document the events and attitudes of the home front. In an 1863 letter, Randolph’s sister Judith Randolph Swann writes, “I hope you all won’t think I am foolish tho the Yankees took most of my sense away when they visited us […] of all humans they are the most detestable.” While the Randolph’s letters document the major events of typical family life – births, deaths, illnesses, marriages – they also convey events and casualties specific to the war, from a decidedly Confederate perspective. “The vile Yanks seem to be closing in on Rich’d in all directions where they don’t expect to meet with armed men. […] I fear from all I can hear that Mann [Page] was captured by the Yankees this day week […] Beverly Randolph (Col. Bev’s son) was shot on the train of cars as it moved off from Greenwood & killed on the spot,” I. R. Page writes on March 9, 1865. One month later, Richmond had fallen, and Robert E. Lee surrendered at Appomattox.

An especially rich series of letters to Randolph comes from his nephew Isham Randolph Page, a surgeon in the Confederate Army. Page handles his uncle’s business affairs in Richmond and writes about the hiring out of slaves, with special attention to Sam, whose whereabouts are unknown. In one letter he warns, “I don’t think the servants can have meat every day. White people here & all over the country go without & our servants will be obliged to take it every day now & after a short time.” With the war coming to a close Page tells his uncle,“Alick came to me today, (complaining that he has been worked very hard & scarcely fed at all by Gov’t Agent –) to tell me that he was going home […] He says almost all the hands have gone off because they are driven so hard and fed so badly; that he has stood it as long as he can.”

With the end of the war and emancipation, Randolph is at last compelled to pay his former slaves. A long document dated December 21, 1865 details year-end settlements with them, including Jerry Wade, James Harris, Daniel Braxton, Sam Wade, and their families. Signed with the worker’s mark, an example of these entries reads, “Rec’d of D.C. Randolph Fourty four dollars in full of my wages from 1st May to 1st instant for myself, son Peter & family.”

A valuable genealogical resource. These papers include numerous instances of enslaved people identified by name, including surnames in the 1865 year-end settlement and a contract for the hiring out of Henry Harris and Sam Johnson. A number of these people are referred to in Dianne Swann-Wright’s A Way Out of No Way (2002), which discusses Edward Trent Page (1833-1906), brother of D. C. Coupland’s wife Harriet Page Randolph.

These papers document the centrality of slavery to the lives of a leading Virginia family and the oppression and ultimate emancipation of the Black families with whom their lives were intertwined.

This important collection is worthy of further study and publication.