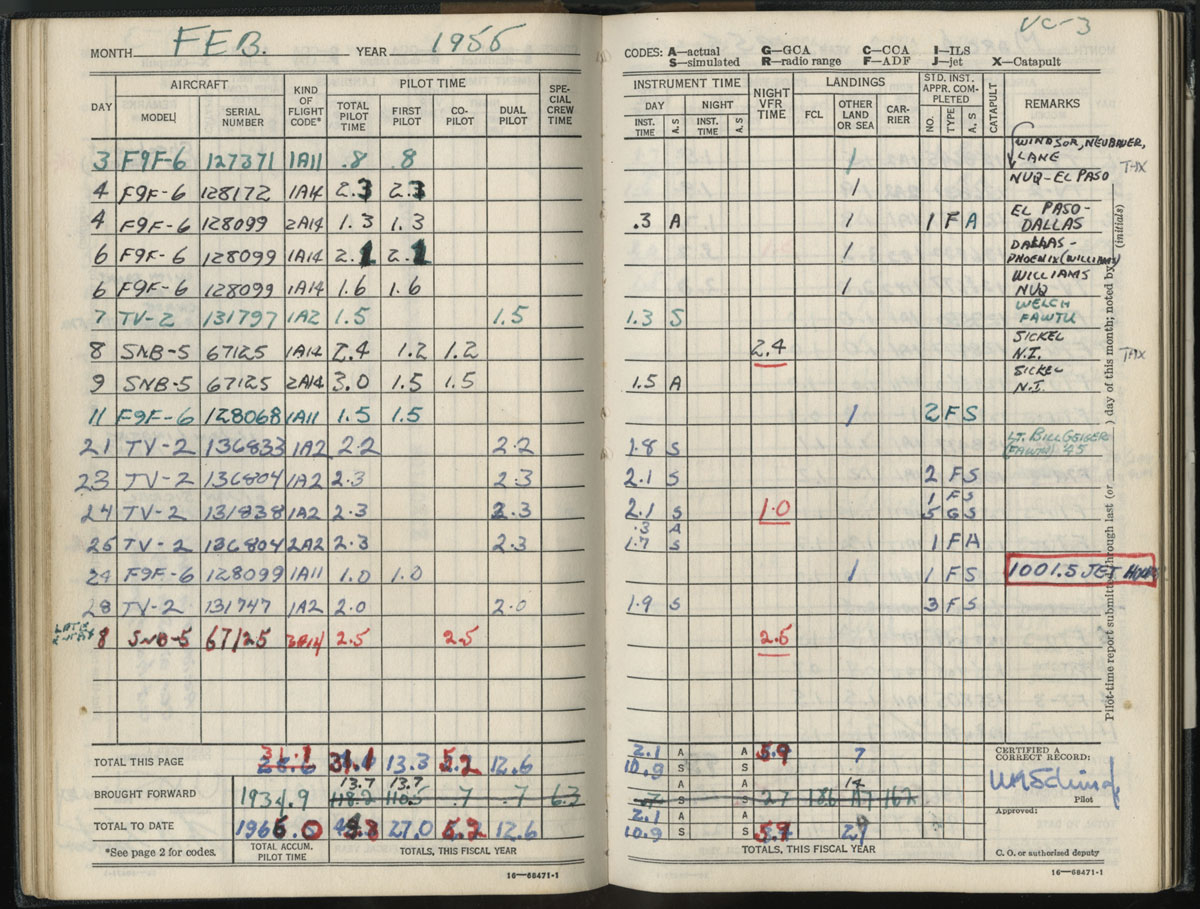 Icon of the American Space Program

SCHIRRA, WALTER M.. A Complete Set of Schirra’s Flight Log Books documenting his entire career as a Navy pilot and a NASA astronaut

This is a complete set of Wally Schirra’s official flight log books, meticulously maintained by him over more than two decades from his earliest days in training through his fabled career as a fighter pilot, a military test pilot, and one of the “Original Seven” American astronauts. Walter M. “Wally” Schirra (1923-2007), one of the original seven American astronauts, is an icon of the Space Age. Schirra was the only man of the original seven to fly in all three pioneering space programs—Mercury, Gemini and Apollo.

KOREA. Schirra graduated from the U.S. Naval Academy in 1945. After the war he trained as a pilot and joined a carrier fighter squadron, becoming the second naval aviator to log 1000 hours in jet aircraft. He fought in the Korean War as an exchange pilot for the U.S. Air Force, flying 90 combat missions, mostly in F-84s. Credited with downing one MiG-15 and damaging two others, Schirra received the Distinguished Flying Cross for his service in Korea.

TEST PILOT. After his tour in Korea Schirra served as a test pilot, testing weapons systems including the Sidewinder missile and the F7U-3 Cutlass jet fighter. Schirra famously once evaded his own Sidewinder when it doubled back on his jet. He also helped evaluate the F-4 Phantom II fighter and other aircraft.

SPACE. In 1959 Schirra was one of the 110 military test pilots selected as candidates for NASA’s Project Mercury. On April 2, 1959 he was named one of the original seven NASA astronauts. Schirra went on to become the first person to go into space three times.

His celebrated career, in which he logged 295 hours and 15 minutes in space, included the following missions:

•    Gemini 6A (December 1965). Schirra achieved the first space rendezvous, keeping his Gemini 6A spacecraft within 30 cm of the sister Gemini 7 spacecraft.

•    Apollo 7 (October 1968). Schirra commanded the Apollo 7 11-day low-earth orbit test of the three-man Apollo Command/Service Module. Apollo 7 was the first Apollo mission to carry a crew into space and the first to be telecast live from within the spacecraft.

This run of flight log books, carefully annotated for more than twenty years, is the most intimate aviation memento imaginable of the fabled career of Wally Schirra, one of the giants of early space flight.