HOME  >  Browse  >  Photographs  >  Photographic Masterworks  >  A Highly Important Personal Album created by or for Carleton Watkins and his family, containing more than 350 photographs 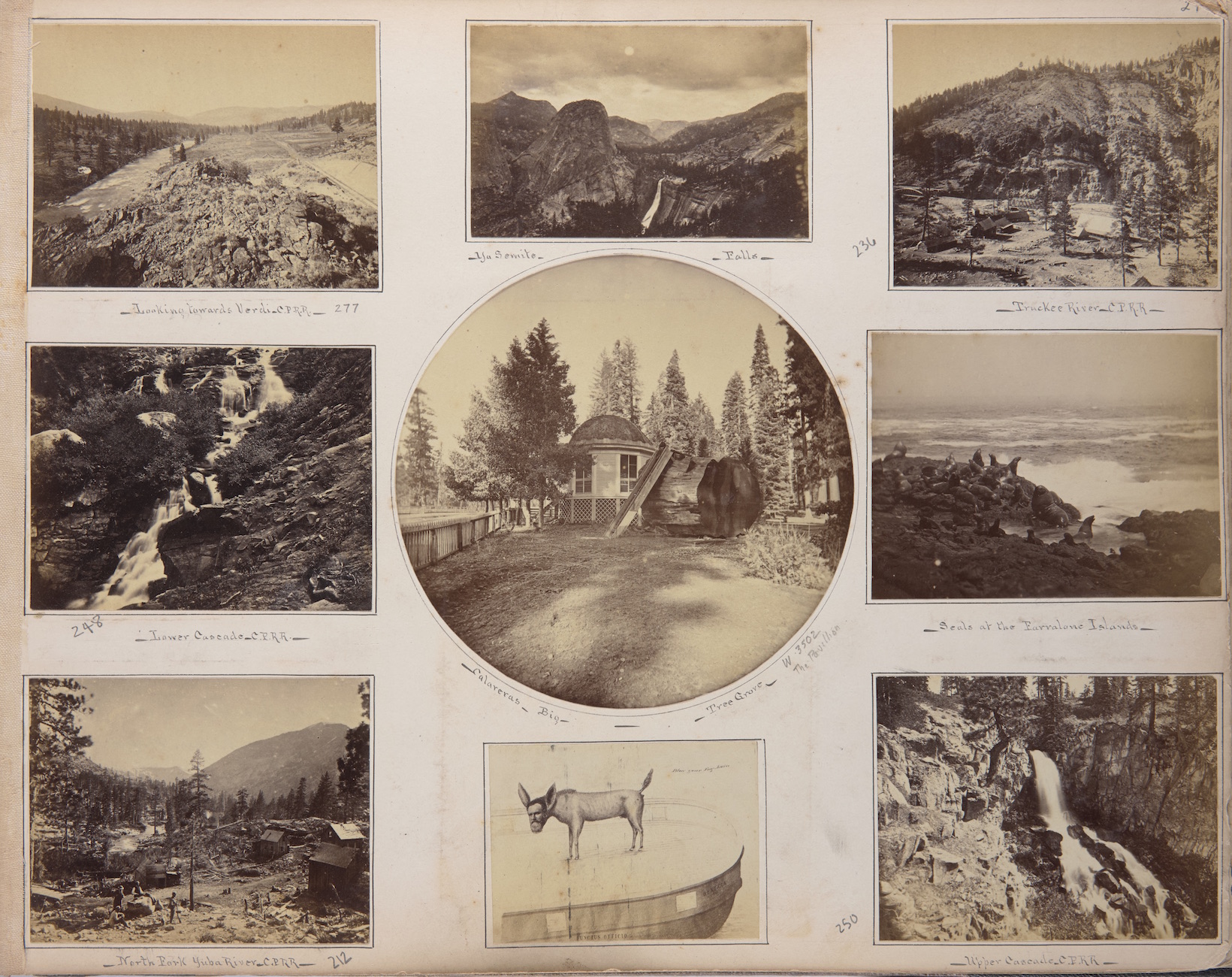 one of the greatest American West photograph albums in private hands

(WATKINS, CARLETON.). A Highly Important Personal Album created by or for Carleton Watkins and his family, containing more than 350 photographs

More than 350 albumen prints, various sizes, mounted on heavy card, on a
total of 46 pages, rectos and versos. Almost all photographs neatly captioned and ruled in ink on the numbered mounts. Contemporary half brown morocco, rebacked preserving original spine. Some soiling. The photographs are generally in very good condition, with some fading. Half morocco case.

Provenance and dating: the leading Watkins authority Weston Naef has identified a series of four photographs in the album to be portraits of Carleton Watkins. Naef further suggests that the album was created by or for Watkins and his family. The album concludes with two large photographs of a house under construction in Oakland; their connection to Watkins has not yet been determined.

“The identity of the compiler is unknown … [but] it could not have been created without [Watkin’s] knowledge and cooperation” (Naef).

It seems likely that Watkins’s assistants Frances Sneade Watkins, Helena Sneade (Frances’s sister), Sallie L. Dutcher, or Myra Waddell would have assembled this album under his direction circa 1880. At this time uncredited female assistants often played significant roles in the studios of important photographers.

The album can be dated with confidence to ca. 1880 on the basis
of internal evidence: 1) the theater portraits show actresses who performed in San Francisco in the late 1870s; 2) the vast majority of the Watkins photographs can be traced to ca. 1880 or earlier, and none later; 3) a photograph of San Jose is dated in manuscript 1880.

This extraordinary album documents the career of Carleton Watkins, the greatest of the first generation of photographers of the American West and a giant in the history of photography. Watkins “stands today at the symbolic apex of all that is unreservedly grand about the American West of the mid-nineteenth century” (Palmquist). The album also contains an important collection of western photographs from negatives taken by Alfred Hart and later acquired by Watkins.

Watkins’s photographs of Yosemite, the embodiment of the pristine West, are coupled here with Hart’s photographs of the construction of the first transcontinental railroad, making this a stunning visual record of the American West as it was being utterly transformed. The album presents a remarkable pictorial history of San Francisco and its culture, from the circus to the Bohemian Club, at a time when Watkins was shaping the city’s artistic culture.

A highlight of the album is the series of four newly discovered early (self-) portraits of Carleton Watkins. Three of these portraits show a remarkable “Camera Man” costume made of scores of photograph portraits and a hat in the shape of a camera. The fourth is a portrait of Watkins in Scottish regalia, apparently about ten years older and thus c. 1880.

Leading Watkins authority Weston Naef writes that he “can be identified as Watkins through the same type of analysis that leads to the ‘Shunshine’ identification [another photograph believed to depict Watkins]. The bony facial structure and lean physique match what we know of Watkins’s appearance, but more relevant to an association with Watkins are the implications of his imaginative costume, which consists of a hat in the form of a pretend camera and a suit with its every square inch covered with mounted photographs, the majority of them being portraits. The costume was created for a special occasion but there is no clue in the album what was being celebrated” (Naef, Chasing Aurora: The Secret Life of Carleton Watkins). As only two other somewhat indistinct portraits of the photographer are known to survive, these are the most important extant photographs of Watkins, the greatest of the early Western photographers.

The presence of these 21 circular prints by Watkins suggests that this is a presentation album created by or under the direction of Watkins. We are aware of no similar presentation albums remaining in private hands Watkins & Yosemite and other parts of California.

The album contains scores of Watkins’s California photographs printed from negatives later lost in the San Francisco earthquake and fire of 1906. The dazzling views of Yosemite include many of the most famous natural wonders of that untouched wilderness. Business and industry photographs include views of trains and mining operations. The giant sequoias of Calaveras are shown in several fine Watkins prints. In addition to its many San Francisco images by Watkins, the album contains views in San Jose, Lake Tahoe, and Salt Lake City, including views of the Mormon Tabernacle and Brigham Young’s residence.

Watkins and the history of San Francisco

This album is a key document in the history of photography in San Francisco. Carleton Watkins was at the center of the city’s rich photographic history. “California’s art history is distinctive because it begins not with a painter or sculptor but with a photographer. Watkins seized a new medium, barely a decade old when he was born, and invented a fresh pictorial language” (Christopher Knight, Los Angeles Times). Recognized as a vanguard artist in his time, Watkins became a member of the famed Bohemian Club of San Francisco in 1872.

This album reflects a keen interest in San Francisco’s art and culture at a time of growth and vitality. The fine views include street scenes, panoramic vistas, hotels, gardens, architecture, and the sights and performers of San Francisco’s Woodward’s Gardens. The album contains portraits by Watkins and others of well-known politicians, businessmen, actors, dancers, and others in 1860s and 1870s San Francisco.

Finally, the album contains intriguing connections with Eadweard Muybridge, Watkins’s associate at a pivotal moment in San Francisco photographic history. On one page we see a photograph of a painting of a dog smoking a cigar. On another, a page with two Camera Man portraits, the smoking dog image reappears as part of a surreal montage advertisement for Muybridge’s short-lived Helios enterprise. In this and other ways this album offers tantalizing avenues of investigation for future researchers into the artistic relationship between Watkins and Muybridge.

This unique album contains prints of 154 photographs by Alfred A. Hart. Carleton Watkins purchased Hart’s negatives in 1869, and he soon began publishing those stereo negatives as his own. Thus, the appearance in a single album of Hart’s railroad and landscape photographs together with Watkins’s own professional and personal work is unsurprising.

Alfred Hart (1816-1908) was a pioneering photographer of the American West. The Central Pacific Railroad commissioned Hart to document the construction of the first transcontinental railroad’s western route, from Sacramento to Promontory Summit, Utah. From 1866 to 1869 Hart traveled with the workers, documenting their monumental achievement and the magnificent, untouched land through which the railroad passed.

The Hart views in this album are captioned with a Central Pacific Railroad (CPRR) manuscript inscription separating the Yosemite views from CPRR views by subject. A majority of the images have been matched to known Watkins stereoviews and mammoth plate prints. A number have slightly different cropping, sometimes showing more image than the published stereograph. Thus the individual who made this album possessed the negatives and created these prints expressly for this album.

This album is one of the most compelling survivals of the early days of western American photography. Its archive of Watkins personal and professional images, together with its extensive trove of Hart’s work, combine to form one of the most important single objects in the history and art of photography of the American West.

It is most unlikely that another early, extensive and personal album of Watkins western photographs remains in private hands. This treasure will be a centerpiece of any collection of western American photography.

Almost all of Watkins’s professional and personal effects were destroyed in the San Francisco earthquake and fire of 1906. Douglas Nickel notes in his authoritative Carleton Watkins: The Art of Perception that only “one pocket note-book, a handful of family letters and a few stray artifacts” remain as the records of his intentions and outlook. Thus this album is among the finest surviving records of Watkins’s life and work.

Watkins is the greatest single figure in the 19th- century photograph of the American West, and this unique album is likely the most important single Watkins object remaining in private hands.