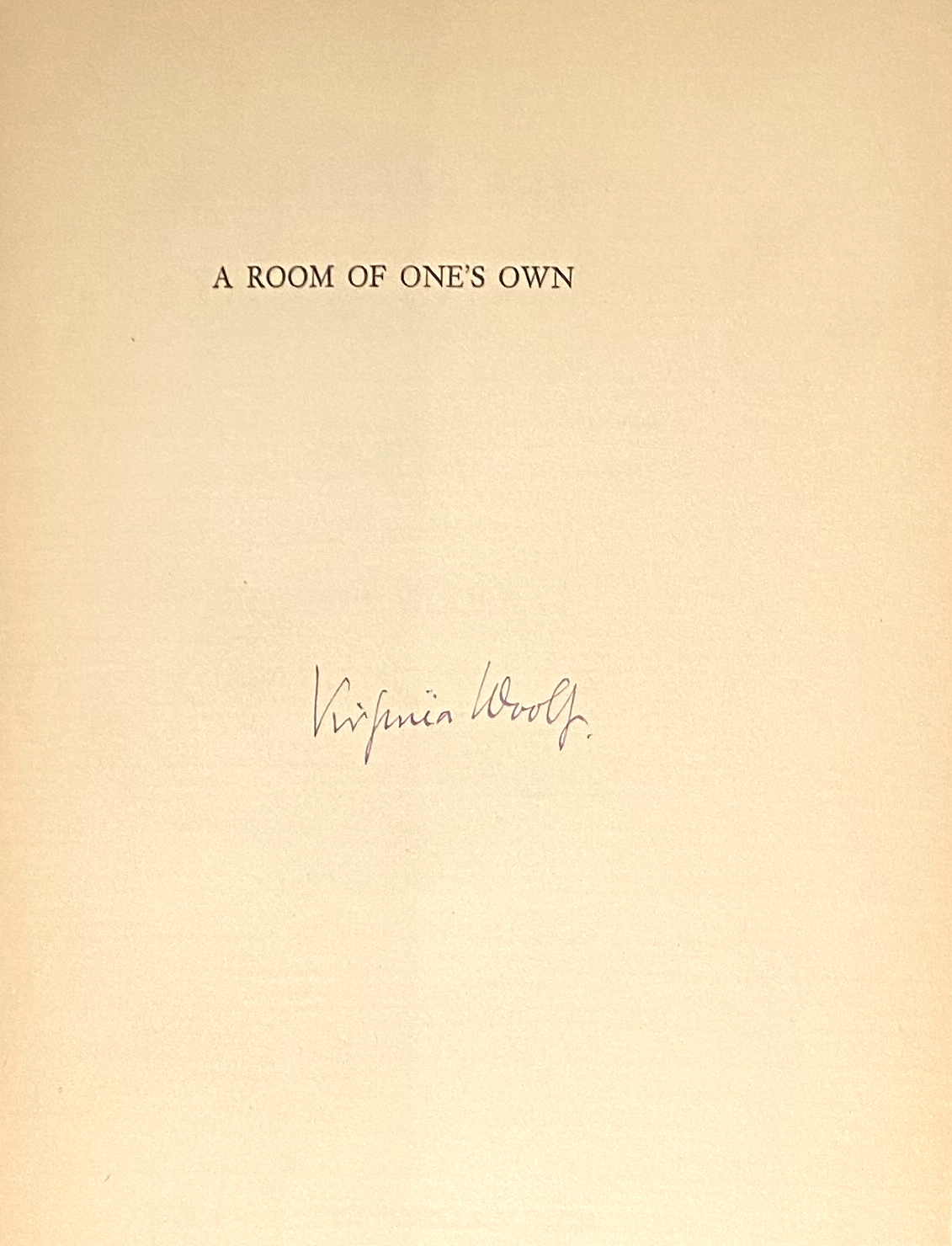 A Room of One’s Own “does for the intellectual and spiritual liberation of women what [Wollstonecraft’s and Mill’s works] did for their political emancipation.”

WOOLF, VIRGINIA. A Room of One’s Own

Original cinnamon cloth. Minor offsetting to two leaves. Slight fading to one board. Near fine.

FIRST EDITION, preceding the trade edition. One of 492 copies signed by Virginia Woolf, this copy noted as “out of series’ on the limitation page.

This is a very rare presentation copy of Woolf’s landmark feminist text. Woolf has inscribed and signed the book in purple ink to Cambridge philosopher R. B. Braithwaite (see Provenance below).

“Woolf refutes the widely held assumption that women are inferior writers, or inferior subjects, instead locating their silence in their material and social circumstances. Women have been barred from attending school and university, for instance, or excluded by law for inheritance, or expected to marry during which their time is spent housekeeping and childrearing. Woolf imagines what kind of life ‘Judith Shakespeare’ – a brilliant, talented sister of Shakespeare – might have lived, concluding that she, ‘would have been so thwarted and hindered by other people, so tortured and pulled asunder by her own contrary instincts, that she must have lost her health and sanity to a certainty’” (British Library).

A Room of One’s Own has become one of Woolf’s most-read works and a classic of modern feminist thought. “A review in the Spectator anticipated the book’s modern reputation: ‘Future historians will place Mrs. Woolf’s little book beside Mary Wollstonecraft’s The Rights of Woman and John Stuart Mill’s The Subjection of Women. It does for the intellectual and spiritual liberation of women what those works did for their political emancipation. But A Room of One’s Own outshines them both in genius’” (Bradshaw and Clarke, eds., A Room of One’s Own, 2015).

VERY RARE. No other presentation copy of the deluxe first edition of A Room of One’s Own has appeared for public sale in more than fifty years.

Provenance: inscribed by Virginia Woolf to philosopher R. B. Braithwaite, a Fellow of King’s College, Cambridge from 1924 to 1990. Braithwaite was one of the Apostles there and a member of Keynes’s inner circle. It was Braithwaite’s hot poker that Wittgenstein brandished against Popper in a famous clash of Cambridge philosophers. Woolf, who was friendly with Braithwaite through their numerous Cambridge connections, recalled the philosopher roaring “like a bull” at the ribaldry of their dinnertime conversation. Braithwaite appears in Woolf’s correspondence and in an unpublished play she wrote around 1931. Her publishing house, the Hogarth Press, published Braithwaite’s The State of Religious Belief in 1927.

Le Monde, Books of the Century 69.