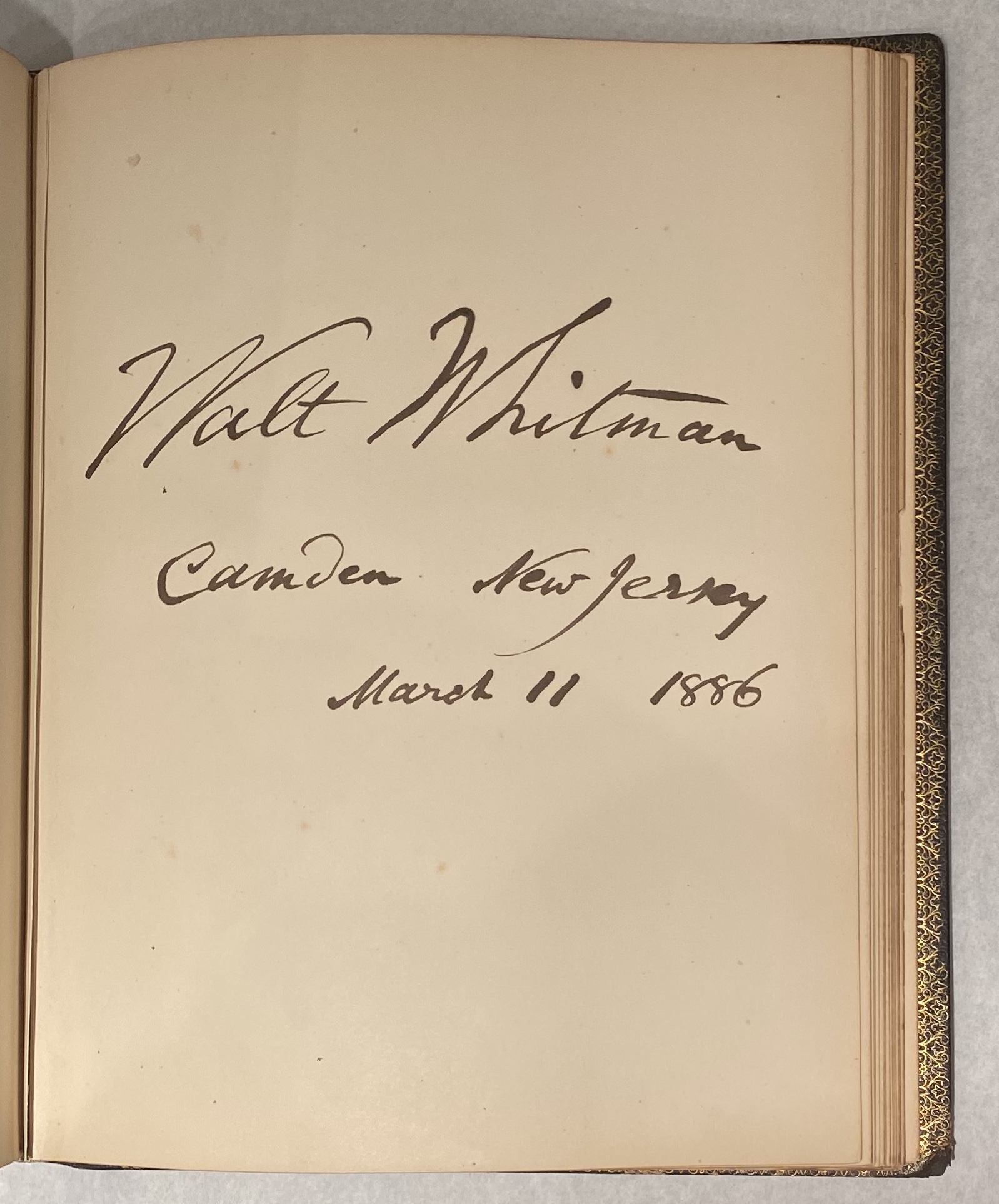 This magnificent album presents a who’s who of American literature featuring autographs, often with substantial quotations from poems, by American literary giants such as Emerson, Melville, Whitman, Whittier, Lowell, Longfellow, Bryant, and Holmes. The album’s owner had direct access to a wide array of literary figures and considerable powers of persuasion to convince them to write at length in this treasured album.

The album opens with, in order:

Truth, crushed to earth, shall rise again;
The eternal years of God are hers;
But Error, wounded, writhes with pain,
And dies among his worshippers.

The night shall be filled with music,
And the cares, that infest the day,
Shall fold their tents like the Arabs,
And as silently steal away.

October turned my maple’s leaves to gold;
The most are gone now; here and there one lingers:
Soon these will slip from out the twigs’ weak hold,
Like coins between a dying miser’s fingers.

Whittier, John Greenleaf. Autograph manuscript quotation from “To — on receiving his ‘few verses for a few friend,” signed and dated 1879.

Every day brings a ship,
Every ship brings a word;
Well for those who have no fear,
Looking seaward, well assured
That the word the vessel brings
Is the word they wish to hear

Courage! Nothing can withstand
Earnest heart and willing hand

[Fields.] Pencil sketch of a man with a basket of fruit. Its placement in the album opposite the Fields poem suggests that it is by Fields, the noted poet and publisher.

Build thee more stately mansions, O my soul,
As the swift seasons roll!
Leave thy low-vaulted past!
Let each new temple, nobler than the last,
Shut thee from heaven with a dome more vast,
Till thou at length art free,
Leaving thine outgrown shell by life’s unresting sea!

Lowell, James Russell. Autograph quotation headed “My Study,” a substantially altered variant of lines from “Heartsease and Rue,” signed and dated 1877. These lines may have been composed on the spot, drawing from a published work.

Who would not love this book-entombed retreat?
These days that loiter with snow-silent feet?
Truants of Time, tomorrow like today,
That come unadorned and claimless glide away
By shelves that save them in the indulgent Past
Where wrong hath ceased or turned to song at last.

This month is a honey-blossom
No doubt, as the poet sings;
But between her lips, the petals,
Lurks a cruel bee that stings.

MacDonald, James Wilson. Drawing of the George Armstrong Custer Memorial at West Point, in pencil, signed and dated 1879. Following the Battle of Little Big Horn (1876), Custer was reinterred at West Point in 1877, and funds were raised for a heroic monumental sculpture. MacDonald’s design was chosen and dedicated in 1879. Custer’s widow Libbie objected that she was not consulted, and the statue was removed in 1884 by order of Secretary of War Robert Lincoln. The statue has since disappeared.

Thou, wild young wearier, rest
By all the prairie-winds caressed!

Later in the album we find:

Melville, Herman. Signed leaf dated November 3, 1877. Signed on a leaf with an Edgar Fawcett quotation. At this time Melville was living in obscurity as a customs official, having given up professional writing. Few would have thought at this date to seek him out and ask for his autograph in a literary album.

Whitman, Walt. Enormous signature dated “Camden New Jersey March 11 1886.” This is the largest Whitman signature we have ever seen.

Other authors and artists represented in this remarkable album are:

Colman, Samuel. “The Tower of the Comares,” proof etching on tissue. Signed and dated 1881.

Fairfield, Francis Gerry. “At the Thirty-Eighth Year,” signed and dated 1879.

Kimball, Michael B. Long prose quotation concerning “the lfie of the me,” or “Egomet.”

Mathews, Cornelius. Quotation beginning “I am a conscript, rather than a volunteer” signed and dated 1878.

Piatt, John James. Autograph quotation from “The Rose and Roost,” signed and dated 1877.

Requier, A. P. Six lines of verse beginning “I sometimes think in my rarer hours,” signed and dated 1877.

Weir, Robert W. Pen and ink drawing of people in a doorway signed with initials.

Weir, Robert W. “The Round of the Waters,” signed.

White, Richard Grant. Autograph quotation from the essay “Three periods of modern music,” signed and dated 1877. “Genius, although conscious of its power is ever ignorant of its tendency, & never works but for its own ends.”

Willis, Nathaniel Parker [and] Morris, George Pope (authors, editors, and publishers). Two autograph letters signed. On the recto Willis has written a letter to his writing and editing partner George Pope Morris, and Willis’s long reply is on the verso. New York, October 25, 1854. The two men worked together for many years as editors and publishers of their own literary journals, most notable the New York Evening Mirror, which was first to publish Poe’s “The Raven.” These letters involve editorial and publishing matters. Mounted.