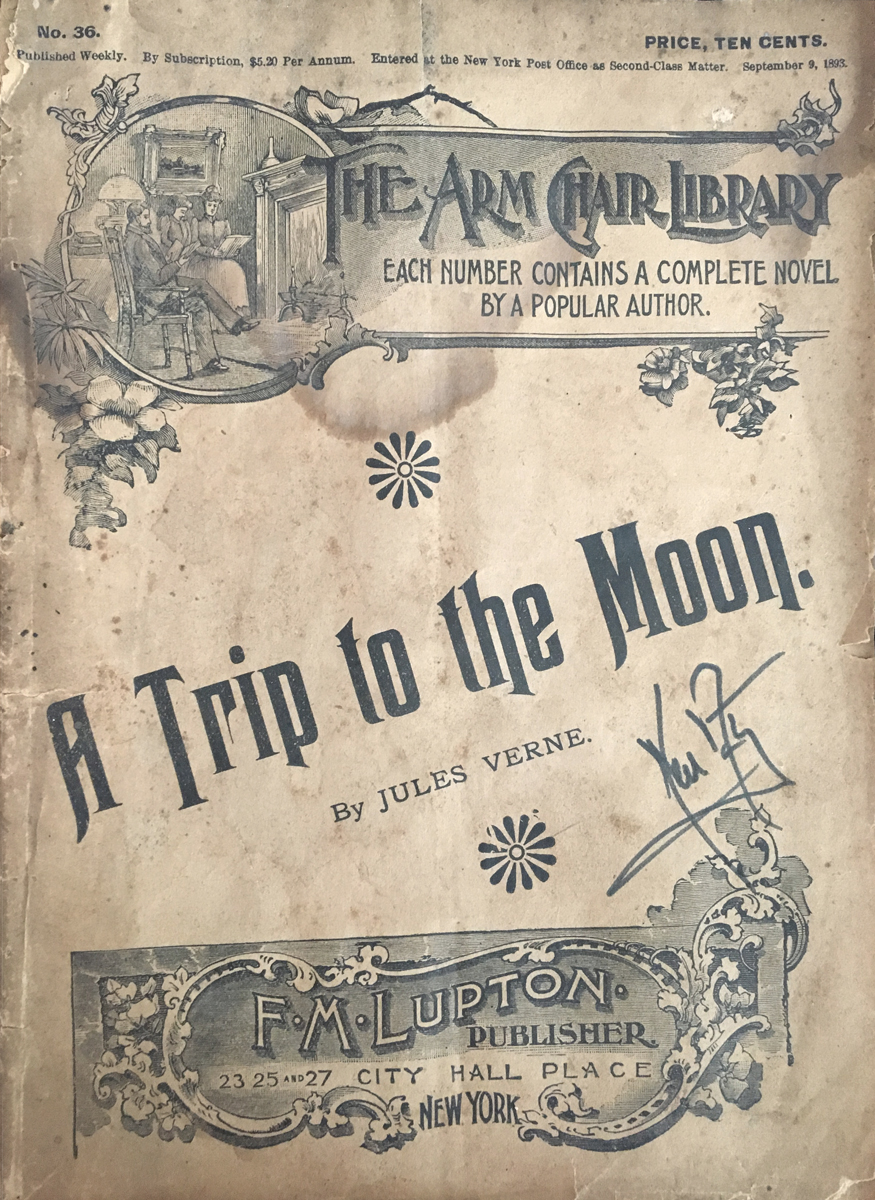 A Trip to the Moon signed by Neil Armstrong

(ARMSTRONG, NEIL.) VERNE, JULES. A Trip to the Moon

Signed by Neil Armstrong, first man to walk on the moon. This classic of science fiction, turned into scientific fact by Armstrong and the Apollo 11 mission, was first published as De la Terre à la Lune in 1865. Verne’s reputation as the inventor of the science fiction novel rests primarily on From the Earth to the Moon. Verne’s novel, set in post-Civil War America, presents the tale of the development and financing of a grand scheme to launch a manned vehicle to go to the Moon. The book was eerily accurate in its predictions concerning the feat. Verne described a three-man crew launched from Florida in a cylindro-conical vehicle called the Columbiad (Apollo 11’s was the Columbia). Like Apollo 11, the vehicle used retrorockets, the men experienced weightlessness, and they returned from the Moon and ultimately splashed down in the Pacific.

During his return from the Moon, Neil Armstrong spoke to the people of Earth, stating in part, “A hundred years ago, Jules Verne wrote a book about a voyage to the Moon. His spaceship, Columbia, took off from Florida and landed in the Pacific Ocean after completing a trip to the Moon. It seems appropriate to us to share with you some of the reflections of the crew as the modern-day Columbia completes its rendezvous with the planet Earth and the same Pacific Ocean tomorrow …”

Verne underscored his emphasis on science when he compared his work with that of H. G. Wells: “I do not see the possibility of comparison between his work and mine. We do not proceed in the same manner. It occurs to me that his stories do not repose on a very scientific basis. … I make use of physics. He invents. I go to the moon in a cannon-ball, discharged from a cannon. Here there is no invention. He goes to Mars in an airship, which he constructs of a metal which does not obey the law of gravitation. Ça c’est très joli … but show me this metal. Let him produce it.”

“I’m sure we would not have had men on the Moon if it had not been for Wells and Verne” (Arthur C. Clarke). “[Verne’s] first books, the shortest, Around the World and From the Earth to the Moon, are still the best in my view. … Over the last forty years, they have had an influence unequalled by any other books on the children of this and every country in Europe” (Leon Blum, 1905).

A wonderful association item linking the giants of literary and real space travel.