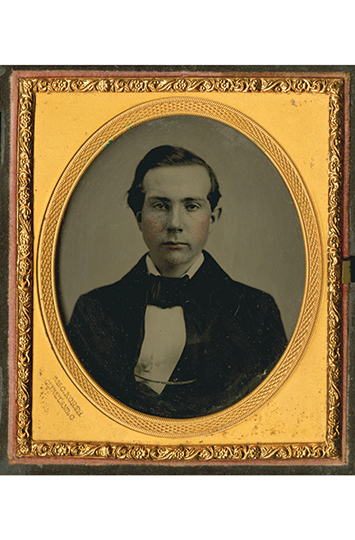 This famous portrait of John D. Rockefeller is the earliest known photograph of the greatest titan of American business and industry. When he sat for this photograph in 1857 or 1858, the 18-year-old Rockefeller was working as a bookkeeper in Cleveland. He began his own business in 1859, built his first oil refinery in 1863, and established Standard Oil in 1870, revolutionizing the nascent petroleum industry. Rockefeller was the wealthiest man in history and the first great modern philanthropist. As a percentage of the United States economy, no other American fortune has ever come close to that of Rockefeller. Apart from the immense fortune his amassed (perhaps $1 billion at the turn of the century) and the national economy he helped fuel with Standard Oil and its descendants, Rockefeller established the Rockefeller Institute for Medical Research and the Rockefeller Foundation, which for almost a century have been leaders in their fields.

“The rise of the Standard Oil men to great wealth was not from poverty. It was not meteor-like, but accomplished over a quarter of a century by courageous venturing in a field so risky that most large capitalists avoided it, by arduous labors, and by more sagacious and farsighted planning than had been applied to any other American industry” (Allan Nevins). Rockefeller chose this photograph to be the frontispiece to his autobiography, Random Reminiscences of Men and Events, published in 1909 when he seventy. In that book the portrait appeared with the caption: “Mr. John D. Rockefeller at the age of eighteen.” The Rockefeller Archive Center holds a copy of this image printed on paper (presumably created when the ambrotype was unsealed in order to create the frontispiece for Random Reminiscences).

This is one of the most valuable 19th-century American photographic portraits and a centerpiece of any collection of capitalism.