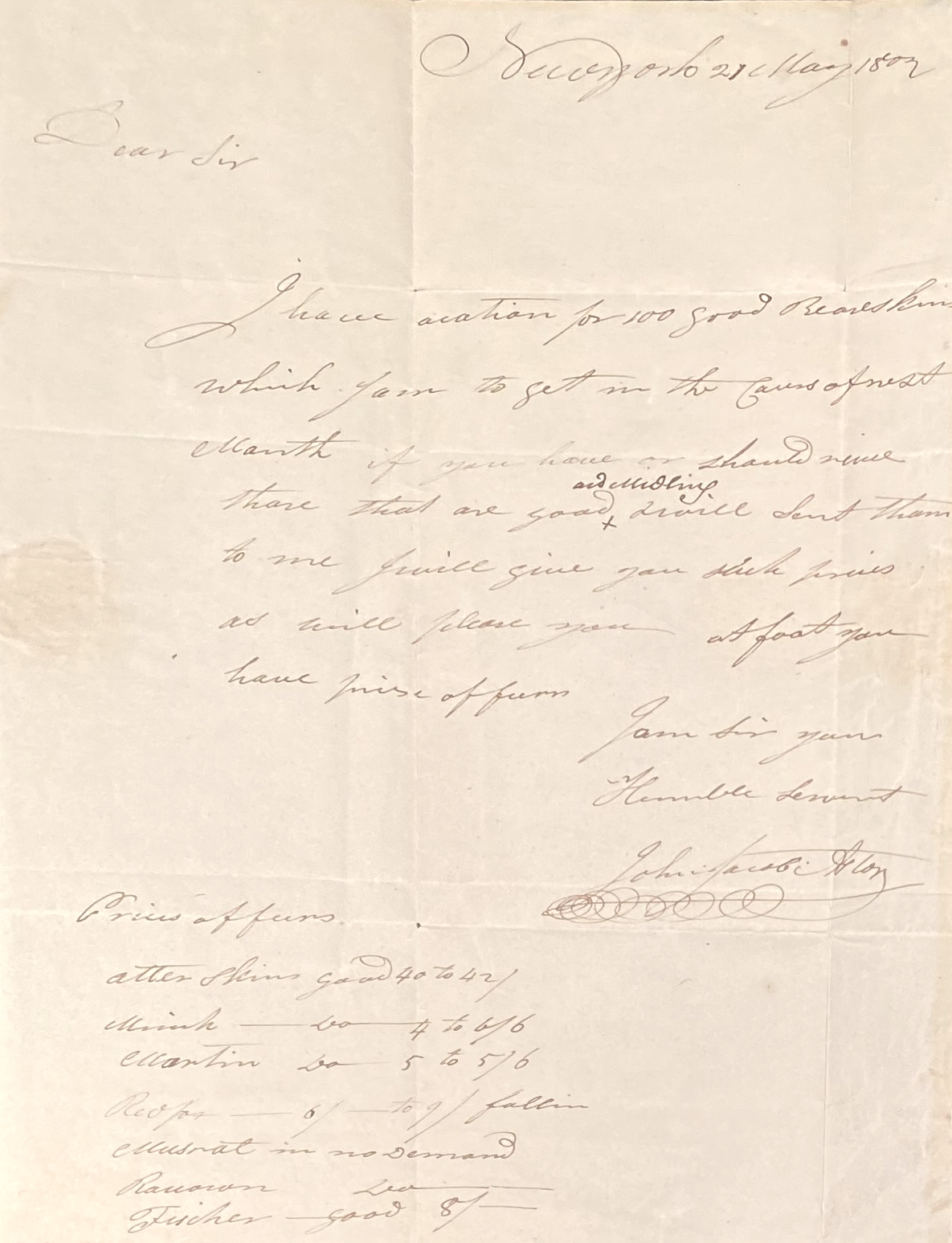 ASTOR, JOHN JACOB. An important collection of 14 letters and documents, 13 of them signed by Astor

John Jacob Astor, founder of the Astor business dynasty, was the first American multimillionaire. In his time he was “the richest and most powerful of American businessmen. He came to personify nineteenth-century American business leadership, and he became a favorite subject for both capitalism’s apologists and detractors” (Haeger).

Astor began trading furs in the 1780s. By 1808, the year of the founding of his American Fur Company, he had become the leading American fur merchant. In the following years Astor made fortunes in the China trade and in New York real estate. He was by far the wealthiest person in American history before the railroad era.

This remarkable collection documents Astor’s wide-ranging contributions to American business and financial history. These letters track the growth of Astor’s enterprises and his vast ambition. In an 1802 letter he asks a merchant in Schenectady for 100 bear skins and names the prices he will pay for various furs. By 1812 Astor is trading gold and paper money with the state bank of New York. Just five years later Astor, having helped to establish the Second Bank of the United States, is shaping its activities to his purposes. Astor also made a fortune in the China trade, a fact reflected in the letter to his longtime partner N. C. Ogden (1776-1823). Ogden handled Astor’s affairs in Canton, the two doing business on a stupendous extent. In a document dated 1823 Astor buys nearly 150,000 muskrat skins! By 1827, when he begins doing business with Poland & Son in London, he is a giant of the fur trade, dictating terms and doing business on a vast scale.

A highlight of the collection is the run of seven Astor letters to London fur merchant Peter R. Poland & Son. The file begins with Astor accepting, on a trial basis, Poland’s offer to act his agent in London. In the ensuing letters Astor objects to Poland’s fees, addresses market conditions, discusses the difficulties of transatlantic business communications, specifies the animal furs he seeks and the quality he requires, and haggles over terms and prices. Astor’s intimate familiarity with the fur market is on full display in this correspondence.

Ultimately Astor piles on additional orders, doing business on a staggering scale amounting to many hundreds of thousands of furs in the first year alone. The letters to P. R. Poland & Son are marked “duplicate,” yet they bear stamps and seals indicating that they traveled across the Atlantic. It is evident that Astor sent two copies of each letter, using different packet ships, to ensure that his communications reached Poland in a timely manner. In the fur business timing was everything, “it being important to have early information,” as Astor writes.

Astor and the other founders saw a national bank as essential for a stable supply of money and credit, economic growth, and westward expansion. William Jones, installed as the first president of the Bank, exacerbated financial tensions with his inept handling of its affairs, driving the country into recession. In these letters to Jones, Astor expresses his frustration with the Bank’s policies and with the money market and attempts to reshape them.

“John Jacob Astor was pre-eminently the opener of new paths, a breaker of trails. … The trees of the forests west of the Mississippi were blazed by his hunters and trappers; and his partners and agents planted through this vast region the flag of the American Fur Company. The Atlantic and Pacific Oceans were invisibly lined by the path of his vessels. His were the first American ships to habitually circle the globe, trading around the earth. With his far-sighted vision withdrawn from distant scenes, and centered on Manhattan Island, he led the way toward the upbuilding of the largest, and most important city in the new world” (Gebhard, The Life and Ventures of the Original John Jacob Astor)

“Through shrewd evaluation of the world marketplace, an efficiently organized and run company, and aggressive exploitation of any opportunity with which he was presented, Astor rose from humble origins to become the most prominent businessman of his age” (ANB).