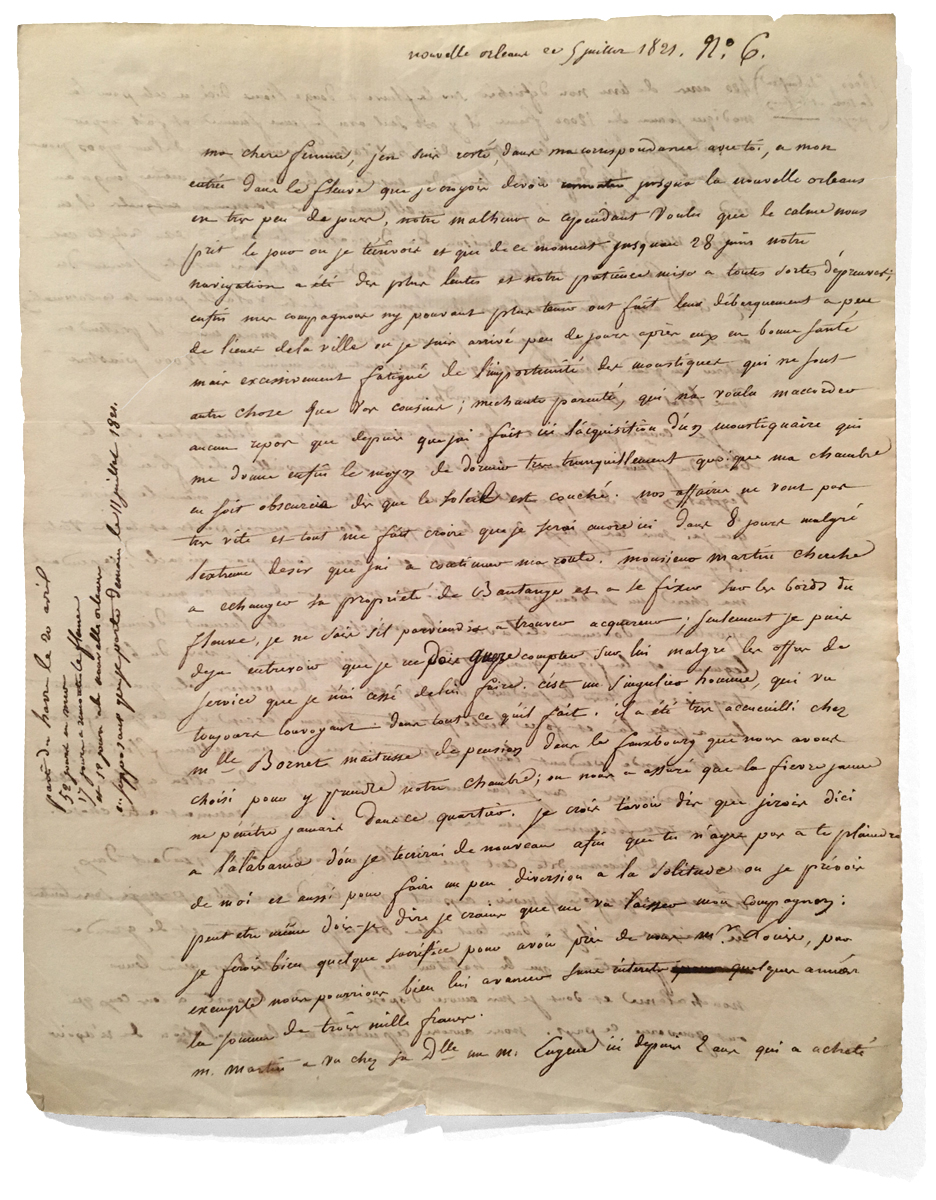 A French Pioneer in the American South

This tremendous manuscript collection documents in great detail a pioneering French settler’s ambitious struggles to establish a home in the new state of Alabama in the early 1820s.

In 1821, Antoine Prudence Lalouette, formerly a lieutenant of infantry under Napoleon Bonaparte, left Burgundy to establish a new home in America. He sailed from Le Havre and arrived in New Orleans in June 1821. Lalouette immediately set out for Mobile, where he acquired a prime 1240-acre parcel of land near Mobile Bay on Riviere aux Poissons (present-day Fish River). Over the course of the next two years Lalouette worked to clear the land, equip himself, build a home and slave quarters, and cultivate the land, while surviving in a harsh, wild environment.

Lalouette’s extremely long letters to his wife, closely but legibly written, begin with accounts of his eventful travels including his ship’s arrival in the Gulf of Mexico pursued by a corsair, his stay in New Orleans, where streets were just beginning to be paved, and his journey to Mobile in search of property. He finally bought the 1240-acre parcel at the junction of the Fish River near Mobile Bay. In these densely written letters, the extremely observant French settler analyzes the state of agriculture in the deep South and the prospects for making his fortune there. He describes Mobile, its population, and its markets. Lalouette visits a neighbor who has already made a fortune and has twenty slaves and a brickyard. He makes calculations of expected profits taking into account the number of animals and the cost of slaves, makes an inventory of the woods of his property, and details what he has managed to grow.

There remains a little time for reading, and so he lists for his wife the books he has brought to America, including Montesquieu’s works, Say’s political economy, Volney’s work on natural law, and more. Lalouette writes to his wife in warm terms, but he also assigns her countless tasks to help meet the enterprise’s endless needs. He asks her to obtain and ship specific wines which he plans to resell, to collect vines and seeds for cultivation in America, and to send tools, textiles, and furniture. To accomplish this, as well as her planned move to the new land, he explains the steps required to ship their belongings in Rouen, and he refers her to his friend Louis-Augustin Bosc d’Antic, naturalist of the Paris Museum, to send him plants and fruit trees from the King’s Nursery.

The letters reflect an undercurrent of the torments Lalouette must endure. He gets lost in the jungle for twenty-four hours, sleeping in the open with wild animals all around. An insect stings him, causing a fever that he says lasts for months. A three-colored snake attacks his animals, and his dog is eaten by a caiman as he tried to swim to their canoe.

Finally, having endured constant trials and faced with his wife’s refusal to join him, Lalouette abandoned the propject and returned to France in August 1823. He and his heirs kept the land, contesting efforts to wrest it from them, culminating in a successful lawsuit in 1884.

Unpublished archives of this interest, quality, and extent from the deep South at this early date are rare in the market.

A detailed inventory is available.