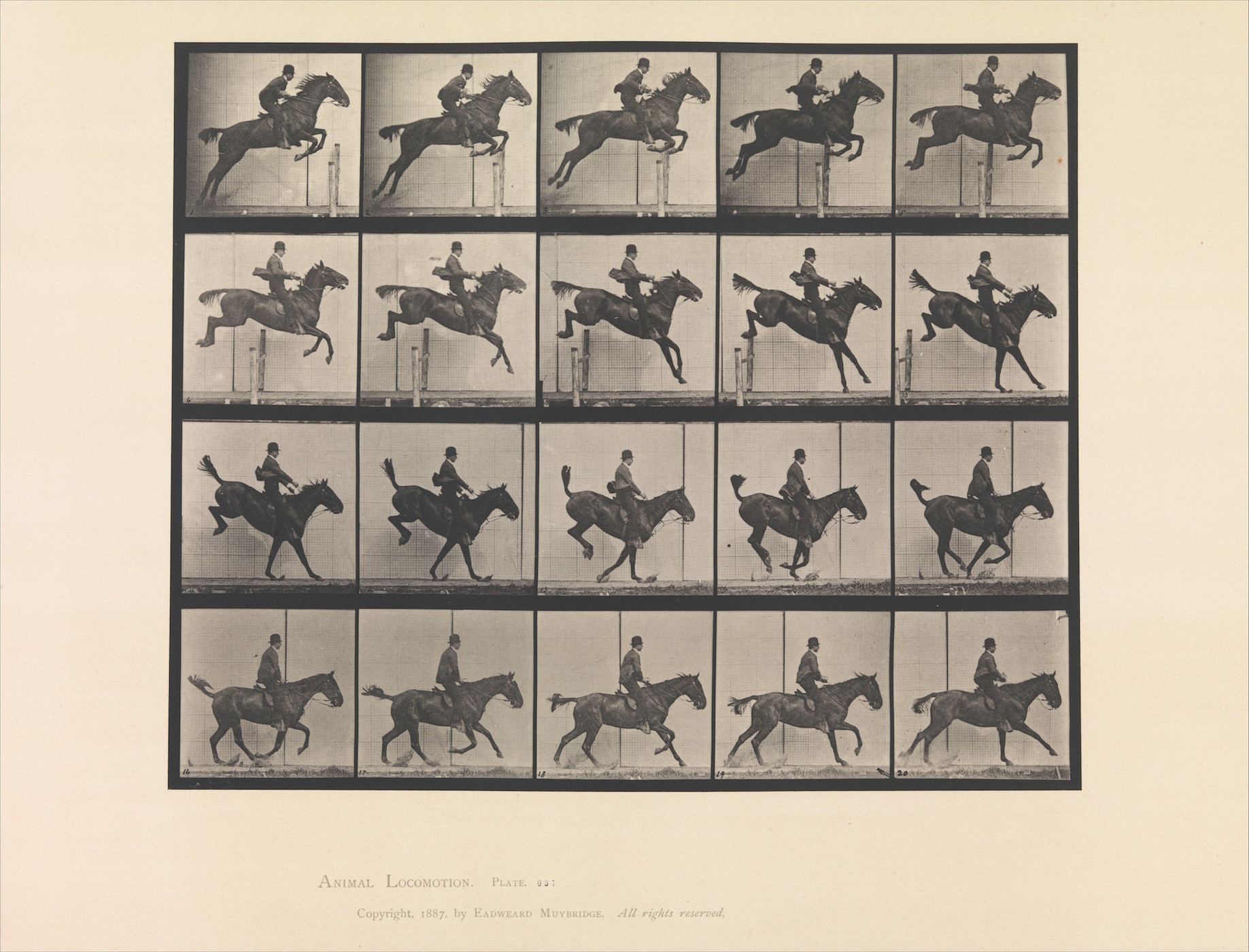 the only known complete separate set of the Animal Locomotion horses

95 collotypes, comprising a complete set of the horses (plates 563-657). Each image approximately 7 ½ in. x 16 ½ in. (sheet 19 ½ x 23 ⅛ in.). Title printed in red and black. Old leather binding present, plates removed and individually sleeved, with traces of binding at one edge, a few minor stains in margins. Archival boxes. An excellent set.

Eadweard Muybridge was a leading photographer in California when the wealthy horse enthusiast Leland Stanford approached him in 1872 hoping to obtain accurate views of a running horse. In part this was to settle the “unsupported transit” controversy—are there moments when all four of a horse’s feet leave the ground while trotting or galloping? Stanford funded Muybridge’s ingenious experiments in sequential photography using trip wires, advanced mechanical shutters, and unprecedented short exposure times. Muybridge’s photographs became a sensation in Europe when he displayed them in rapid succession, creating the effect of a motion picture. In the 1880s at the University of Pennsylvania, he continued his photographic studies. There he made tens of thousands of photographs of animals and humans in motion. Because of his work in sequential photography, Muybridge is regarded as a father of the motion picture. “Muybridge’s pioneering experiments with the sequential photography of moving figures were instrumental in the later invention of the motion picture” (Long).

Muybridge’s monumental achievement is documented in his magnum opus, Animal Locomotion. The prospectus listed all 781 plates and invited prospective buyers to select 100 for the price of $100 (a complete set could be purchased for a staggering $600). Subscribers could make their selections after examining one of the complete sets deposited “in one of the Art Institutions or Libraries of Philadelphia, Boston, New York, Washington, and other large cities of the United States.” Subscribers included leading institutions, scientists, collectors, and artists such as Bouguereau, Millais, Rodin, Sargent, St. Gaudens, Vedder, and Whistler. Paul Valéry reported that Edgar Degas was one of the first artists to study the images of Animal Locomotion.

“Quoted extensively by artists and scientists alike, Animal Locomotion was at the time—and remains to this day—one of the most influential publications of its kind” (Brookman, Eadweard Muybridge).

The examples of Animal Locomotion appearing for sale are almost invariably idiosyncratically chosen groups of 100, typically with a few plates missing. The present collection comprises a complete set of all of the horse photographs. It includes a printed title stating volume 9 and “[plates] 563-657” (plates 1-562 were humans and plates 658-781 were other animals). The presence of the title page indicates that this set was part of or was intended to be part of a complete set of Animal Locomotion. The prohibitive price resulted in the production of only 37 sets of all 781 plates, almost all of which were sold or presented to institutions.

This is likely the only complete set of the horse photographs extant, apart from those institutional sets that have managed to remain intact.