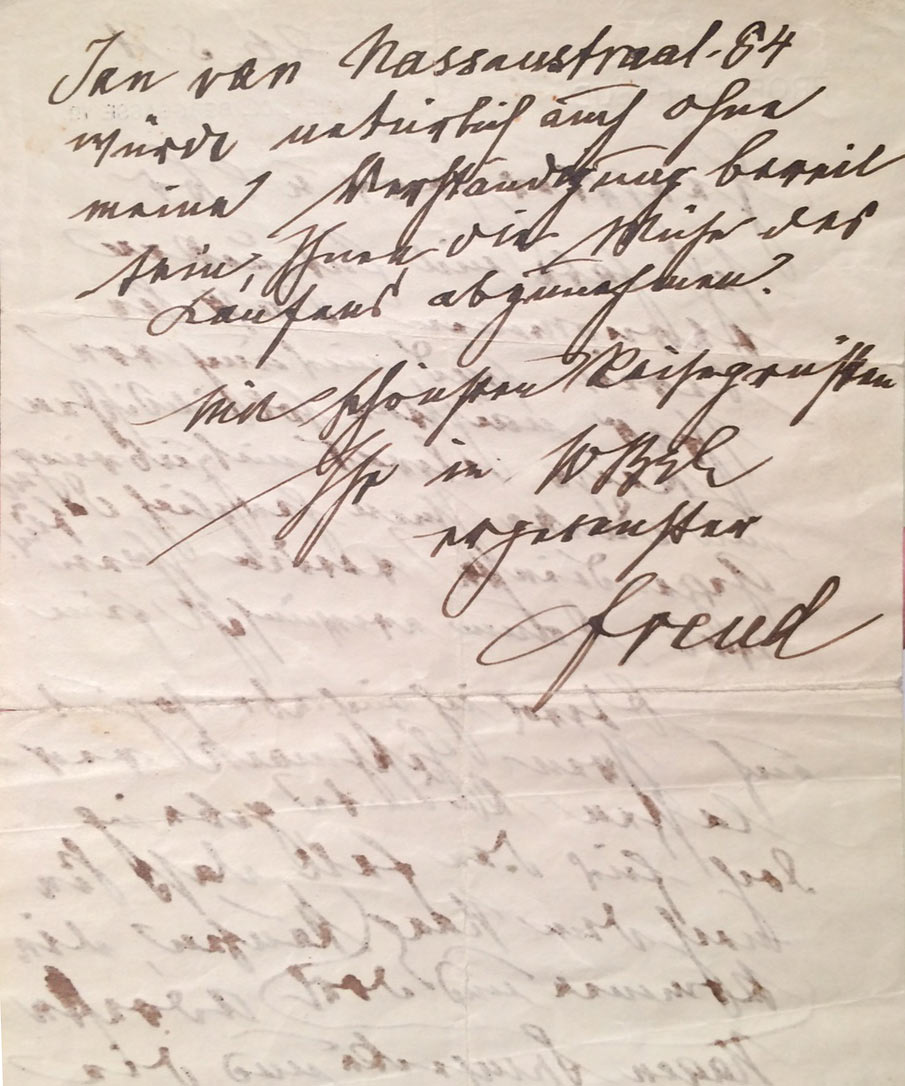 Sometimes a cigar is just a cigar

FREUD’S CIGARS. In this fine letter Sigmund Freud asks a friend visiting Holland to bring back his beloved Dutch cigars, writing in small part, “Although I could just as well rely on your taste, in case you get to The Hague and make the purchase there, I’ll give you the address Hagen Spinecka and the brand Soberanos (1400 [presumably a series of the Soberanos brand] 15 dozen). The enclosed 60 florin note is to cover this purchase.”

In turn-of-the-century Vienna, the Austrian government maintained strict control over the tobacco industry, and Freud relied on friends to bring him the cigars he smoked endlessly. Freud, who was rarely seen without a cigar, smoked twenty each day for most of his life. When Freud nephew Harry declined a cigar at age 17, the great man declared, “My boy, smoking is one of the greatest and cheapest enjoyments in life, and if you decide in advance not to smoke, I can only feel sorry for you” (Gay, Freud: A Life for Our Time).

Freud said late in life that cigars have “served me for precisely fifty years as protection and a weapon in the combat of life … I owe to the cigar a great intensification of my capacity to work and a facilitation of my self-control” (Cohen, Freud on Coke). Freud’s close friend Hanns Sachs remarked that Freud “was so fond of smoking that he was somewhat irritated when men around him did not smoke. Consequently nearly all of those who formed the inner circle became more or less passionate cigar-smokers” (Sachs, Freud: Master and Friend).

Freud’s cigars played a role in his psychoanalytic practice. Raymond De Saussure, a psychoanalyst who was himself analyzed by Freud in the 1920s, recalled the special role of the cigar in connecting the patient to his analyst sitting just out of view: “One was won over by the atmosphere of [Freud’s] office, a rather dark room, which opened onto a courtyard. Light came not from the windows but from the brilliance of that lucid, discerning mind. Contact was established only by means of his voice and the odor of the cigars he ceaselessly smoked” (Ruitenbeek, ed., Freud As We Knew Him).

One year after writing this letter, Freud mentioned his enjoyment of Dutch cigars while vacationing in Berchtesgaden in the Bavarian Alps. He hailed “the “the glorious air, the water, the Dutch cigars, and the good food, all resembling an idyll as closely as one can get in this Central European hell.” Freud’s attachment to Dutch cigars was so great that he once observed that “there are plenty of fine cigars [in Holland]. In fact, I have sometimes thought of settling in Holland for that reason” (Puner, Sigmund Freud: His Life and Mind).

This letter is a wonderful relic of the life of Sigmund Freud, who is famously said to have declared, “Sometimes a cigar is just a cigar.