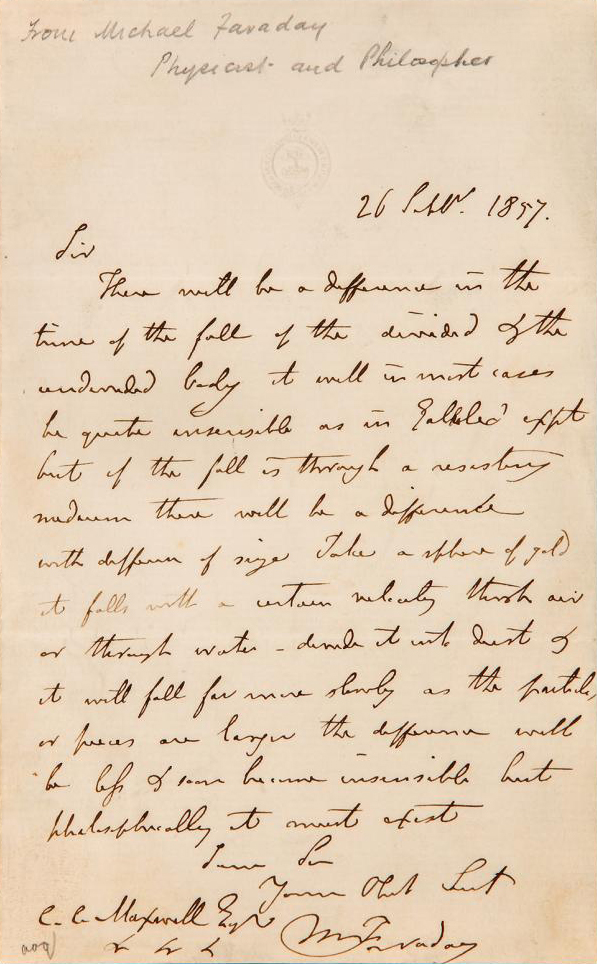 One page (7 x 4¼ in.). Blindstamp of the Royal Institution of Great Britain. Traces of mounting on integral blank leaf. Very good condition.

In this wonderful letter Faraday discusses the famous experiment in which Galileo is said to have dropped spheres of different masses to show that their time of descent was independent of their masses. Though said by some to have been a thought experiment, this was one of the most famous demonstrations in the history of science. The experiment disproved Aristotle’s theory of gravity and helped usher in the era of modern science. In this letter Faraday observes that if the falling body is divided (even so far as into dust), differences in falling time will become apparent as other forces act upon the fall:

“There will be a difference in the time of the fall of the divided & the undivided body it will in most cases be quite invisible as in Galileo expt but if the fall is through a resisting medium there will be a difference with difference of size. Take a sphere of gold it falls with a certain velocity through air or through water – divide it into dust & it will fall far more slowly as the particles, or pieces are larger the difference will be less & soon become invisible but philosophically it must exist.”

One of the most famous scientists of the nineteenth century, Faraday is best known for his fundamental contributions in electricity and magnetism. He was also famous as a popularizer of science. As a famous public figure Faraday generated a substantial correspondence, but his scientific letters are rarely encountered in the market.