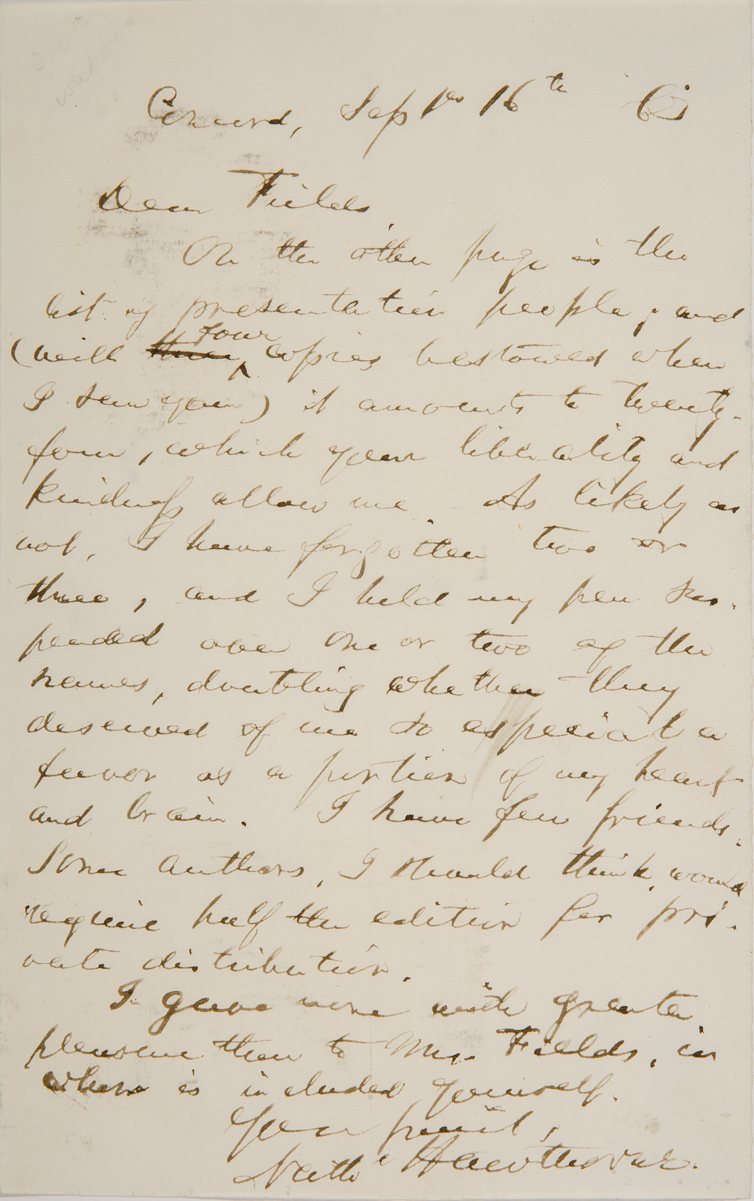 Hawthorne on his last book

In this wonderful letter to his close friend and publisher James T. Fields, Nathaniel Hawthorne discusses the presentation copies of Our Old Home, which was scheduled
to be published three days later on September 19, 1863. Hawthorne writes,

“Dear Fields, On the other page is the list of presentation people; and (with four [altered from three] copies bestowed when I saw you) it amounts to twenty-four, which your liberality and kindness allow me … I held my pen suspended over one or two of the names, doubting whether they deserved of me so especial a favor as a portion of my heart and brain. I have few friends. Some authors, I should think, would require half the edition for private distribution … Your friend, Nathl Hawthorne.”

This remarkable letter explains the rarity of inscribed presentation copies of Our Old Home (none at auction in at least 40 years): Hawthorne arranged for these presentation copies to be distributed directly by the publisher. Presumably these are the copies inscribed “From the author” in a clerk’s hand.

The recipient of this letter, James T. Fields (of the celebrated publishing firm Ticknor and Fields), was one of Hawthorne’s closest friends and greatest influences. Hawthorne once told Fields, “I care more for your good opinion than for that of a host of critics, and have excellent reason for so doing; inasmuch as my literary success, whatever it has been or may be, is the result of my connection with you.”

It was Fields who convinced Hawthorne to transform The Scarlet Letter from a short story into a novel in 1850. Late in the author’s life, after publishing a series of Hawthorne’s essays in The Atlantic Monthly, Fields persuaded the author to collect them in the book published as Our Old Home in 1863. Hawthorne died the following year, and Fields served as his pallbearer alongside Emerson, Holmes, Alcott, Whipple, and Longfellow.

This is a splendid letter reflecting Hawthorne’s famously reclusive nature and explaining the rarity of inscribed copies of Our Old Home.