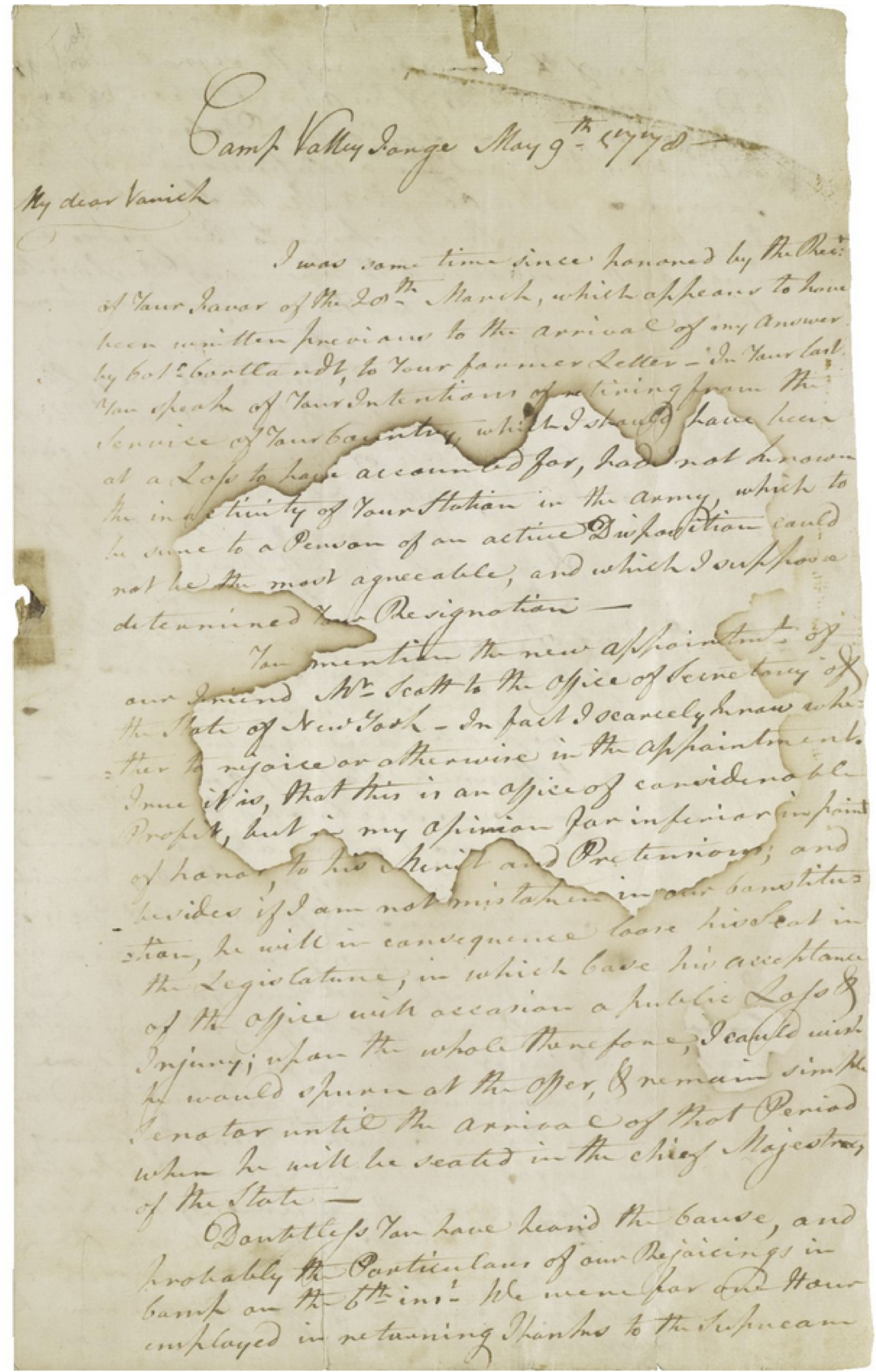 Glorious news announced at Valley Forge: the alliance with France

2 1/2 pages (13 1/8 x 8 1/4 in.), autograph address and reception docket on verso of second leaf. Quite dampstained, seal remnant and tear, some short separations at intersecting folds with early tape repairs, upper fore-edge corner of second leaf lost prior to the writing of the letter (as is clear from the text).

THE ARMY AT VALLEY FORGE CELEBRATES THE ALLIANCE WITH FRANCE. The Continental Army had spent the winter of 1777-1778 at Valley Force in desperate conditions, undernourished, poorly clothed, and ravaged by illness. Weeks after emerging from that long winter, the army learned the news it had hoped for. In early May 1778, George Washington was informed by Congress that the long hoped-for Treaty of Amity and Commerce had been negotiated with France.

Washington share the news in his General Orders of May 5: “It having pleased the Almighty ruler of the Universe propitiously to defend the Cause of the United American-States and finally by raising us up a powerful Friend among the Princes of the Earth to establish our liberty and Independence upon lasting foundations, it becomes us to set apart a day for gratefully acknowledging the divine Goodness & celebrating the important Event which we owe to his benign Interdisposition.”

In this splendid letter Major Fish here describes in detail the day’s events, celebrating the glorious news of what would prove to be one of the war’s decisive events: “Doubtless You have heard the Cause, and probably the Particulars of our Rejoicings in Camp on the 6th inst. We were for one Hour employed in returning Thanks to the Supream Governor of the Universe for the signal Display and Manifestations of his approbation, of our just and righteous Exertions in Defence of this infant Empire, and applicating a continuance of his Favors. At ten o’Clock a.m. the Signal Gun for assembling the Troops into Brigades was fired, at 11 agreeable to the previous Disposition the Signal was given for the whole Line to move in Columns of Brigades to their Ground, where We past a Review by his Excellency the Commander in Chief. At one o’Clock p.m. a Continental Salute of 13 Cannon was given and immediately succeeded by a feu de joy of a running Line from right to left thro’ the whole Line, & concluded with three Cheers of the Line, with the following Expression ‘Long live the King of France.’ The same Process was repeated and concluded with three Cheers and ‘Prosperity to the united States of America.’* The Afternoon was celebrated by all the Officers of the Army in the most rational and jocund amusements at Head Quarters, and the Day concluded with universal Happiness & the strictest Propriety.”

This is an early use of the term “United States of America. The phase was first used by Jefferson in the Declaration of Independence, and the Continental Congress made it official in the Articles of Confederation on November 15, 1777. At Valley Forge that winter, Steuben had drilled the troops into readiness, while Lafayette helped Washington to prepare for the coming campaigns. “By the early spring conditions at Valley Forge greatly improved. Washington appointed General Greene as the new Quartermaster General and he set up an efficient operation for bringing supplies into the camp. The rainy weather continued to be a problem, but the mood of the camp brightened when news of the Franco-American alliance arrived in May.

Washington ordered his troops to line the parade ground and shoot off their guns one by one in celebration. Finally, on June 19, the Continental Army—better trained and more determined than ever—marched out of Valley Forge. Washington, who proved his leadership, remained their commander. Together they headed for New Jersey where they would make a stand against the British army, on its way from Philadelphia to New York, at Monmouth Courthouse” (Mary Stockwell).

The recipient of the letter, Richard Varick, served under General Philip Schuyler and became inspector-general of West Point after the Battle of Saratoga. He served as aide to Benedict Arnold and was arrested after Arnold’s defection. After his name was cleared, Varick served as secretary to George Washington. He was mayor of New York from 1789 to 1801.

In this long letter, Fish also discusses Varick’s intention to resign his commission in the army, New York political intrigues, and the recent death of Fish’s mother: “But here I must stop, here my Prospects are sullied. Permit me dear Varick to ask Your Sympathy and Condolence on the melancholy Event of my Mothers Death, the News of which has just reached me since I have been writing, and tinctured my most happy Moments with Misery & Gloom. … My Pangs would be keen beyond Description (as I am told that during her illness my absence gave her infinite Distress) were I not fully convicted of the Propriety of my Conduct, which ever was founded upon the pure Principles of Duty and Love to my Country.”

Very scarce. Only one other autograph letter signed by Nicholas Fish appears in the auction records since 1975.

BIOGRAPHICAL NOTE. Nicholas Fish, patriarch of the Fish political dynasty, became an intimate friend of Alexander Hamilton at King’s College (now Columbia University). By 1775 they were fast friends and members of the “Hearts of Oak,” one of the earliest volunteer militias in New York.  The “Oaks” wore the phrases “Liberty or Death” and “God and Our Right” on their tunics and hats. They were renowned for capturing a British cannon in a daring raid thereby becoming one of the first artillery units in the New York militia. In 1776 Hamilton was given a commission to raise the New York Provincial Company of Artillery for the protection of Manhattan. The Hearts of Oak were the core of the unit and Nicholas Fish was Hamilton’s second in command.  Hamilton later described the Fish as “prized both as a friend and officer,” and Fish joined with Hamilton to serve George Washington throughout the war.

In 1776 Major Fish served around New York including at the battle of Long Island, and in 1777 he led troops at the battles of Freeman’s Farm and Bemis Heights. In 1778 he served as division inspector under Steuben, seeing action at Saratoga and commanding a troop of light infantry at Monmouth. Fish continued to serve with distinction throughout the war and was with Washington at Morristown during the critical winter of 1780. At Yorktown in 1781 Hamilton gave a command to Fish, by then a colonel, and Fish led an advance party in a brave attack storming the British fortified positions. The American victory at Yorktown effectively ended British hopes for reclaiming control of the colonies.

Washington valued Fish highly as a military leader and confidant and described him as “an officer of Merit.” Fish accompanied Washington on the return to New York after Cornwallis’s surrender, and he remained in Washington’s immediate circle until the close of the war.