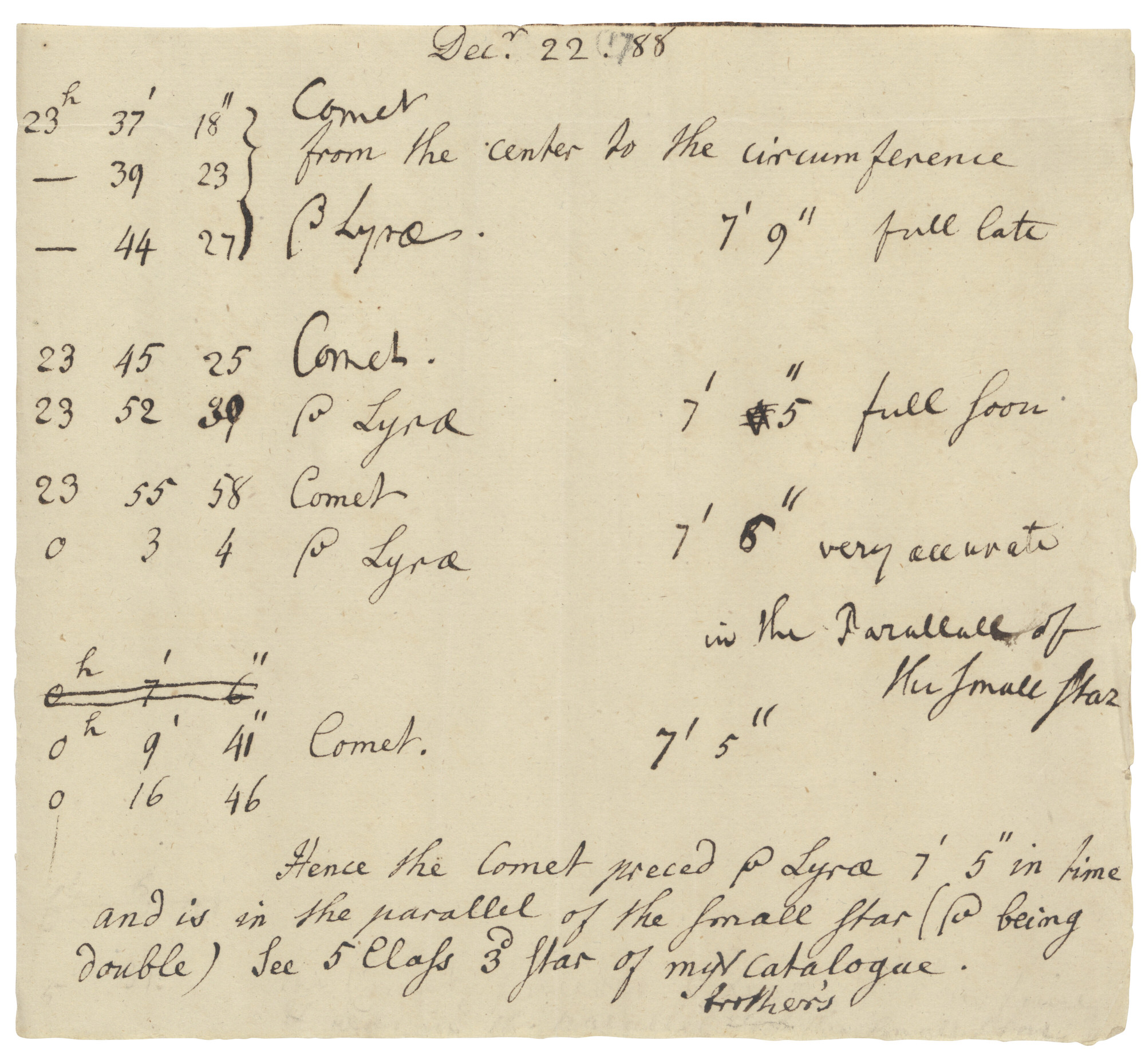 HERSCHEL, CAROLINE. Autograph manuscript observations of her discovery of a comet

One page. Light creasing. Herschel’s observations are followed with her statement, “Hence the Comet preced P Lyra 7’ 5” in time and is in the parallel of the small star (P being double) See 5 Class 3rd Star of my brother’s Catalogue.”

In this wonderful scientific manuscript Caroline Herschel records her observations of her newly-discovered comet, known today as 35P/Herschel-Rigollet.

Caroline Herschel is one of the most famous women in the history of science. The effects of childhood smallpox and typhus and a domineering mother seemed likely to limit her to housework in the family home. But in 1772 her much older brother William asked her to join him in England where he worked as a musician, and soon Caroline was featured there as a singer. When William turned to astronomy and the building of ever-larger reflecting telescopes, she worked as his assistant and collaborator. In 1781 William discovered Uranus, resulting in a royal pension of £200 and the opportunity to build an observatory near Windsor. When Caroline discovered a comet in 1786, George III granted her an annual salary of £50 for her work as William’s assistant, making her the first professional female astronomer. This was “the first professional salary ever paid a woman scientist in Britain, marking a social revolution” (Olson and Pasachoff).

Caroline Herschel is perhaps most famous for her discovery of eight comets. This manuscript documents her second comet discovery, which “came on 21st December, 1788, when she found a comet around one degree south of Beta Lyrae. Like her first comet, the brightness was around magnitude 7.5, and brother William described it as ‘a considerably bright nebula, of an irregular form, very gradually brighter in the middle, and about five or six minutes in diameter’” (Bryant, “The Comets of Caroline Herschel,” Universe, May 1997). The comet reappeared in 1939 when Roger Rigollet in France discovered it. It is today known as 35P/Herschel- Rigollet. The comet will next appear at the end of this century.

William Herschel wrote a letter to the president of the Royal Society describing Caroline’s discovery and fully crediting her. That paper, “Observations on a Comet. In a letter … to Sir Joseph Banks,” dated March 3, 1789, appeared in the Philosophical Transactions of the Royal Society of London.

“Caroline’s career was rather like that of a comet. At first her glory reflected that of her brother—as a comet reflects the light of the sun—but as she approached perihelion, she burned brightly not only with William’s light but also with the light of her own achievements” (Olson and Pasachoff).

Caroline Herschel manuscripts are very rare in the market. Only one letter—and no scientific manuscripts—appears in the auction records of the past fifty years.

This rare Herschel manuscript on her discovery of a comet is worthy of any collection of the history of astronomy or the history of women in science.

Provenance: the Herschel family, by descent.