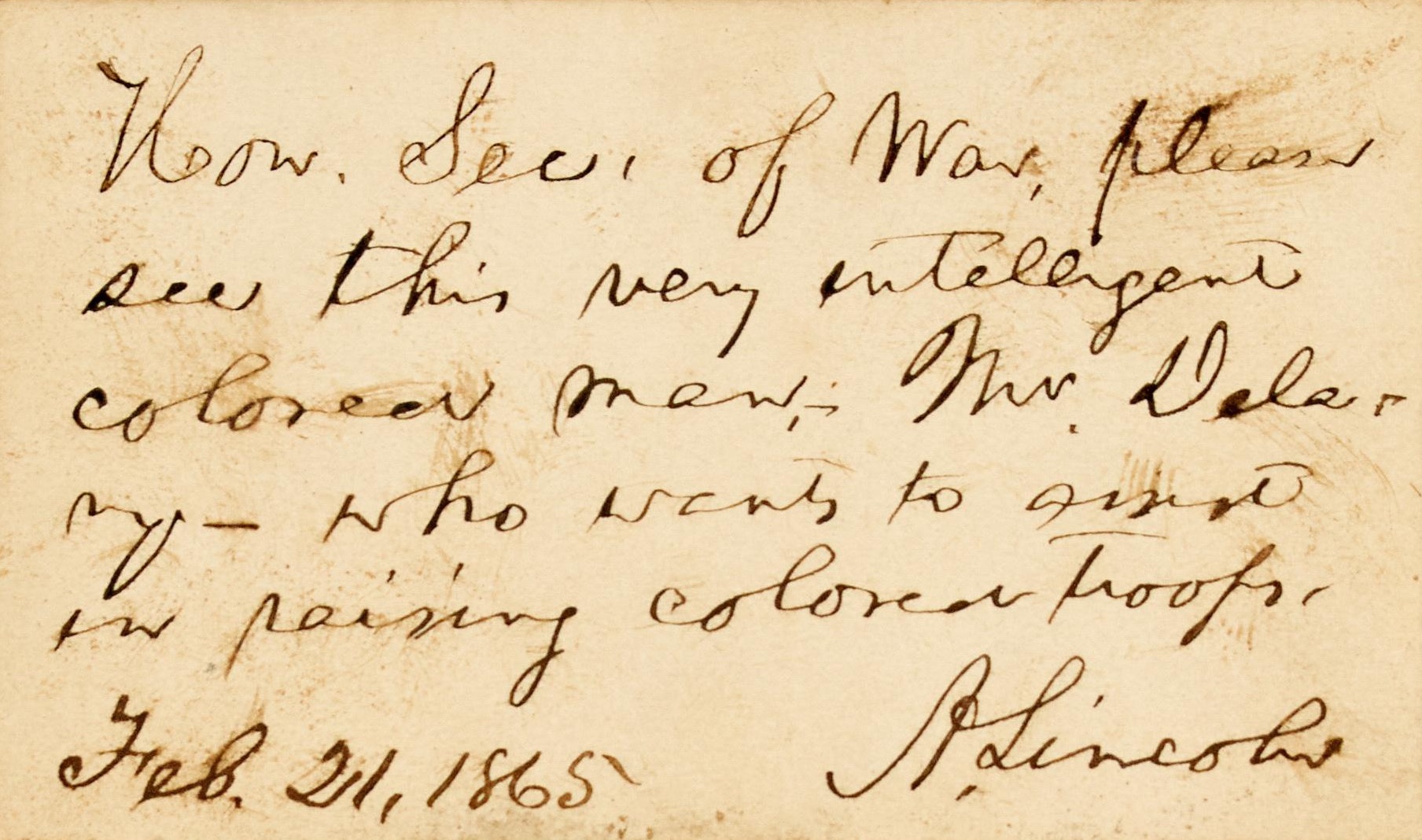 At his meeting with Lincoln, Delany laid out a plan to arm Black soldiers, led by Black officers, and send them into the interior of the South, freeing the enslaved as they went. Lincoln replied, “This is the very thing I have I have been looking and hoping for. … When I issued my Emancipation Proclamation, I had this thing in contemplation.”

Born in 1812 to a free Black seamstress and an enslaved father in Virginia, Delany was raised and educated in Pennsylvania. After an apprenticeship with a physician, he set up his own medical practice in Pittsburgh. By 1842 Delany was publishing the abolitionist newspaper The Mystery, and in 1847-49 he co-edited Frederick Douglass’s fledgling newspaper The North Star. In 1850, Delany became one of the first three Black students accepted to Harvard Medical School, only to be dismissed after protests by white students. Delany emerged as a leading proponent of black nationalism with a series of books and essays in the 1850s. In 1859, he sailed for Liberia to explore the possibility of a establishing colony of Black Americans.

The coming of the Civil War forestalled those plans, and Delany returned to America where he devoted himself to the emancipation of enslaved Americans and the recruitment of Black soldiers into the Union Army. Delany was instrumental in recruiting Black troops to join the 54th Massachusetts and served as its surgeon. His son, Toussaint L’Ouverture Delany, enlisted in the regiment at age fifteen and survived the battle at Fort Wagner. Thanks to Delany and others, by war’s end 179,000 Black men had enlisted in the United States Colored Troops, about 10 percent of all who served in the Union Army.

In February 1865, Delany traveled to Washington to convince Abraham Lincoln that Black men would be more likely to join the Union Army if they could serve under Black officers. Up until then, white officers had led units like the 54th Massachusetts. Delany’s papers are lost, and what is known of that meeting is detailed in Frances Rollin’s The Life and Public Services of Martin R. Delany (1868), with the dates varying slightly from this note. Rollin presents the conversation between Lincoln and Delany at length, “in Major Delany’s own language.” Delany suggested to the president,

“I propose, sir, an army of blacks, commanded entirely by black officers, except such whites as may volunteer to serve; this army to penetrate through the heart of the South, and make conquests, with the banner of Emancipation unfurled proclaiming freedom as they go, sustaining and protecting it by arming the emancipated taking them as fresh troops, and leaving a few veterans among the new freemen, when occasion requires, keeping this banner unfurled until every slave is free, according to the letter of your proclamation.

“I would also take from those already in the service all that are competent for commission officers, and establish at once in the South a camp of instructions. By this we could have in about three months an army of forty thousand blacks in motion, the presence of which anywhere would itself be a power irresistible. You should have an army of blacks, President Lincoln, commanded entirely by blacks, the sight of which is required to give confidence to the slaves and retain them to the Union, stop foreign intervention, and speedily bring the war to a close.”

Lincoln replied, “This is the very thing I have I have been looking and hoping for; but nobody offered it; I hoped and prayed for it; but till now it has never been proposed. … When I issued my Emancipation Proclamation, I had this thing in contemplation.”

After further discussion of ways to use this Black army to help bring about the end of the war, Lincoln asked, “Will you take command?” Delany demurred, stating that he had no experience. Lincoln observed that “tactics are easily learned” and that “it is the head that we now require most—men of plans and executive ability.” Delany then offered letters of introduction, but Lincoln waved them away, saying, “I know all about you. I see nothing now to be done but to give you a line of introduction to the secretary of war.” Delany recalled, “He soon handed me a card, on which was written, “February 8, 1865. Hon. E. M. Stanton, Secretary of War. Do not fail to have an interview with this most extraordinary and intelligent black man.”

Delany’s vivid recollection of Lincoln handing him a card was accurate, but the president’s precise words were slightly different from those published in 1868. This is the very card that Lincoln gave to Delany—independent corroboration of Delany’s dramatic account.

Lincoln’s characterization of Delany as “this intelligent colored man” reflects both the fact that they had a long, substantive conversation and the president’s emphasis on Delany’s role as a black man representing other black Americans wishing to fight on their own behalf. As Delany observed, “This card showed he perfectly understood my views and feelings; hence he was not content that my color should make its own impression, but he expressed it with emphasis, as though a point was gained. The thing desired presented itself; not simply a man that was black, because these had previously presented themselves, in many delegations and committees,—men of the highest intelligence,—for various objects; but that which he had wished and hoped for, their own proposed measures matured in the council-chamber had never been fully presented to them in the person of a black man” [emphasis added].

This document set in motion the meeting with Secretary of War. Six days later, on February 27, 1865, Delany was commissioned a Major in the U.S. Colored Troops, becoming the United States Army’s first black field officer and achieving the highest rank of any African American during the Civil War. Delany joined and recruited for the 104th and 105th U.S.C.T. in Charleston. After the war he stayed in South Carolina as an agent of the Freedmen’s Bureau, and he later ran for political office and served as a judge.

This splendid autograph note by Abraham Lincoln, representing a key step toward the fulfillment of the promise of the Emancipation Proclamation, is worthy of any great private or institutional collection.