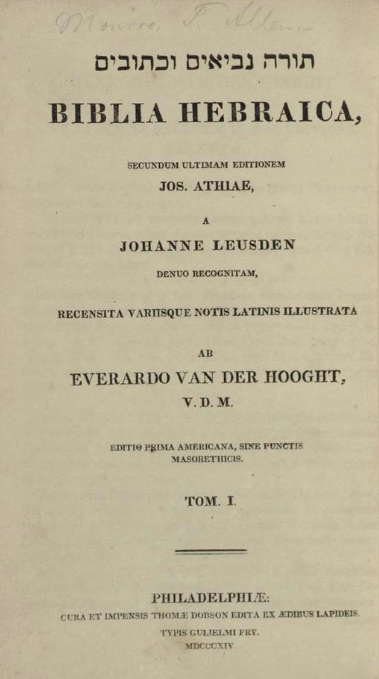 FIRST EDITION of the first Hebrew Bible published in America. This is an outstanding copy in a period binding. Surviving copies are almost invariably rebound.

Jonas Horwitz came to America from Prussian Poland with grand plans to publish a Hebrew Bible. He visited scholars and seminaries in New England and the mid-Atlantic soliciting subscriptions in 1812. Learning that competitors had similar ideas, he jump-started the project in early 1813, transferring the rights to his text and his subscription lists to publisher Thomas Dobson who brought out this edition in 1814. Horwitz pursued a career in medicine, enrolling in the medical school at the University of Pennsylvania.

The text of this two-volume work was taken from the second edition of the Athias Amsterdam Hebrew Bible, edited by Johannes Leusden with Latin notes by Van der Hooght. The final product, with unpointed text, included masoretic notations in Hebrew as well as Van Der Hooght’s Latin preface and marginalia.

“After the ‘lean’ years which followed the Revolutionary War, in the early decades of the nineteenth century America was in the throes of a great religious revival. As part of its intellectual aspect, the study of the Hebrew language was renewed. Grammars, lexicons, and chrestomathies were published, as well as books on the Bible and the Holy Land. The Jewish community was wary of these activities because the same scholars and divines were also involved in missionary activity. The appearance of a work in the Hebrew language which bore approbation from both leading Christian clergymen and leading Jews marked the beginning of friendlier intellectual discourse” (Karp, Judaic Treasures of the Library of Congress).

This is a very good set in the original binding. When this Bible appears for sale it is almost invariably rebound or heavily reworked, typically without the half-titles.