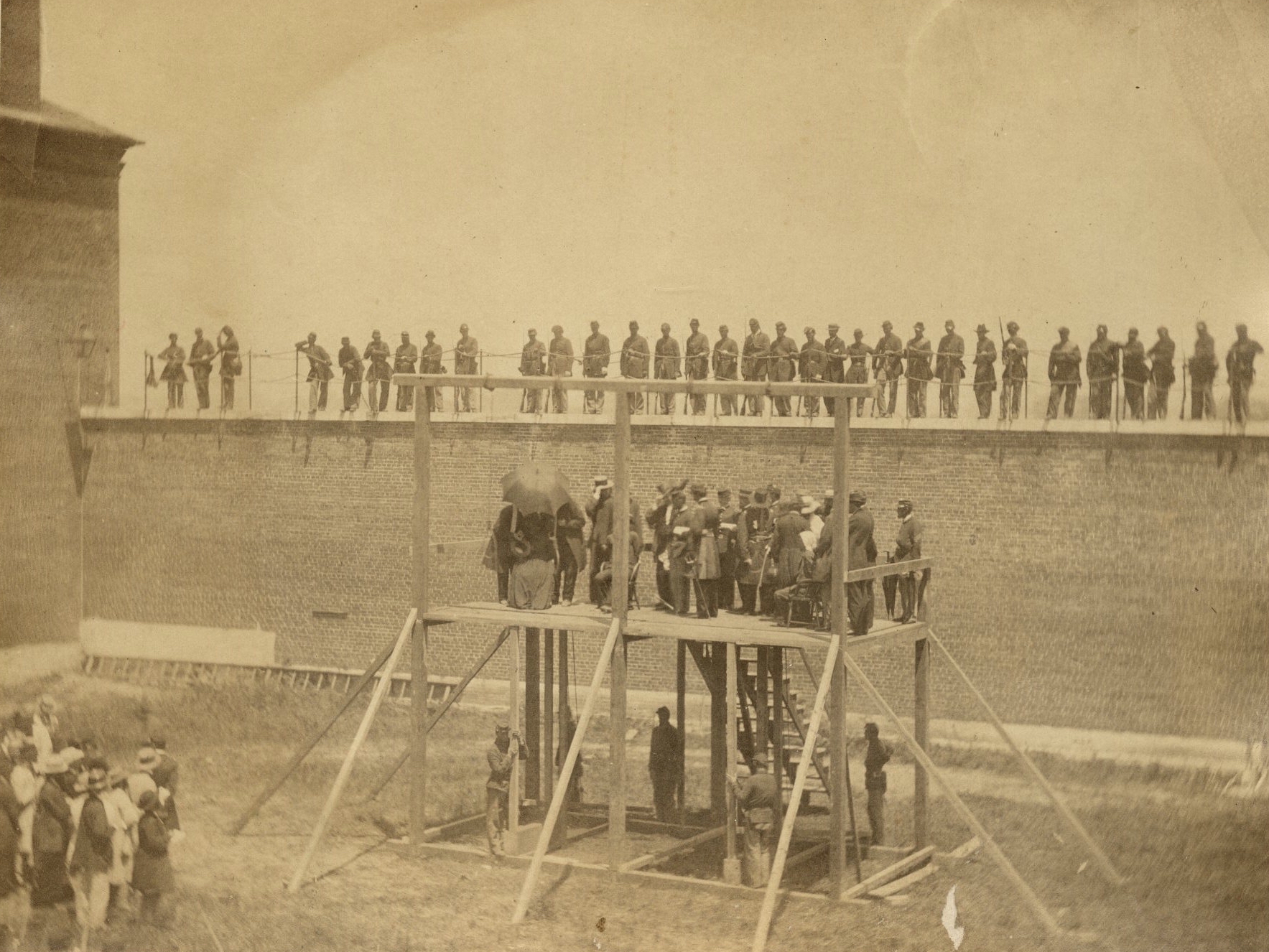 (LINCOLN, ABRAHAM.) GARDNER, ALEXANDER. Collection of four photograph of the execution of the Lincoln assassination conspirators

A monumental event in American photographic history: the hanging of the Lincoln assassination conspirators. Within two weeks of Lincoln’s murder, eight accused conspirators were in custody. President Andrew Johnson ordered a trial by military commission. After a seven-week trial in May and June, the commission retired to deliberate. On July 5 Johnson approved the verdicts and sentences including four death sentences. On July 6 the verdicts were revealed, and the very next day the four executions were carried out simultaneously.

These momentous images represent the dawn of photojournalism in America.
Alexander Gardner, the leading photographer in Washington, secured permission to document the carefully orchestrated event. Gardner worked with his assistant Timothy O’Sullivan to create these images. The collection comprises four photographs documenting the proceedings:

No. 1 Arrival on Scaffold—The execution party, prisoners and guards, ministers and others arrive on the scaffold. The condemned are seated, save Herold, who stands.

No. 2 Reading the Death Warrant—The Order of Execution, held open, is read to the condemned and to the crowd.

No. 3 Adjusting the Ropes—The conspirators stand, Mrs. Surratt supported by two soldiers. A hood has been placed over Lewis Powell’s head, and nooses are fitted around the necks of Herold and Atzerodt.

No. 4 Thus Be It Ever With Assassins [also known as All is Done]—The bodies remain hanging for twenty-five minutes before being cut down.

These dramatic photographs show the preparations for and aftermath of the hanging of the conspirators: Mary Surratt (at whose boarding house the conspirators met), Lewis Powell (who attempted to assassinate Secretary of State Seward), David Herold (who assisted Booth in his flight from Washington), and George Atzerodt (who conspired to assassinate Vice-President Johnson). Tickets were hotly contested. Until the last moment many in the crowd expected that Mary Surratt would receive a last-minute reprieve.

Gardner’s series of photographs remains “the most shocking set of American historical photographs ever made” (James Swanson, Manhunt).

Series of Gardner’s execution photographs are rarely seen. The only other collection we have seen for public sale in years, a group of four prints, sold for $100,000 (Swann Galleries, October 17, 2013, lot 18).