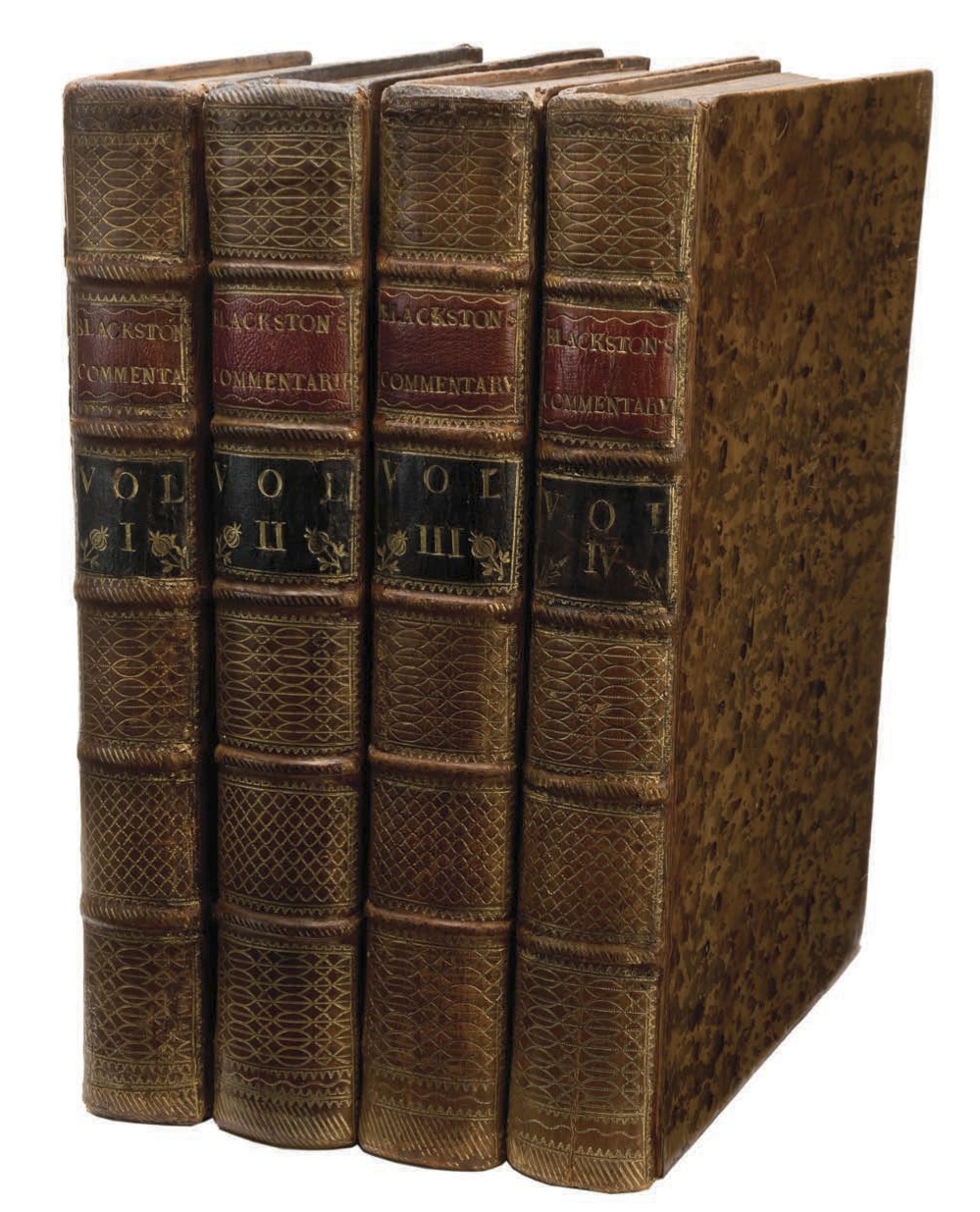 BLACKSTONE, WILLIAM. Commentaries on the Laws of England

First edition of Blackstone’s Commentaries, a monument of the Anglo-American legal and political system and one of the key influences on the thought of the Founding Fathers and the shaping of the Constitution.

“All our formative documents—the Declaration of Independence, the Constitution, the Federalist Papers, and the seminal decisions of the Supreme Court under John Marshall—were drafted by attorneys steeped in Sir William Blackstone’s Commentaries on the Laws of England. So much was this the case that the Commentaries rank second only to the Bible as a literary and intellectual influence on the history of American institutions” (Robert Ferguson).

Blackstone’s impact on American political and legal thinking was profound and immediate. Edmund Burke observed in 1775, “I hear that they have sold nearly as many of Blackstone’s Commentaries in America as in England… This study renders men acute, inquisitive, dexterous, prompt in attack, ready in defense, full of resources. In other countries, the people, more simple, and of a less mercurial cast, judge of an ill principle in government only by an actual grievance; here they anticipate the evil, and judge of the pressure of the grievance by the badness of the principle. They augur misgovernment at a distance; and snuff the approach of tyranny in every tainted breeze.”

“Blackstone’s clearly-stated emphasis on the authority of the law of nature and the absolute rights of individuals was of particular importance in formulating and defending the case for armed resistance to King George and his parliament… The Commentaries thus became and remained the basis of American legal education, hence moulding American legal thought and practice throughout the nineteenth century, and beyond” (Wilfrid Prest).

Thomas Jefferson observed that Blackstone’s Commentaries were “the most lucid in arrangement which had yet been written, correct in its matter, classical in its style, and rightfully taking its place by the side of the Justinian institutes.”

A set of Blackstone’s Commentaries is a cornerstone of any library of the history and thought of the Founding Fathers. Fine copies in original bindings are virtually unobtainable. This splendid set, in a shimmering gilt-tooled calf binding of the period, is worthy of the greatest libraries.

Provenance: Sir John Cust (1718-1770), speaker of the House of Commons from 1761-1770, with his bookplate. The 1793 edition of Blackstone’s Commentaries noted that “Sir John Cust was the last speaker who addressed the throne in the language of diffidence.”

BLACKSTONE, WILLIAM. A Discourse on the Study of the Law.
Oxford: Clarendon Press, 1758.

First edition. This is Blackstone’s inaugural lecture as the first Vinerian Professor of English Law, delivered in October 1758. The lecture, which emphasizes the value of the study of law at university, has been called a “sensible, spirited, and manly exhortation to the study of law” (Sheppard, History of Legal Education in the United States).

This is an excellent, untrimmed copy.