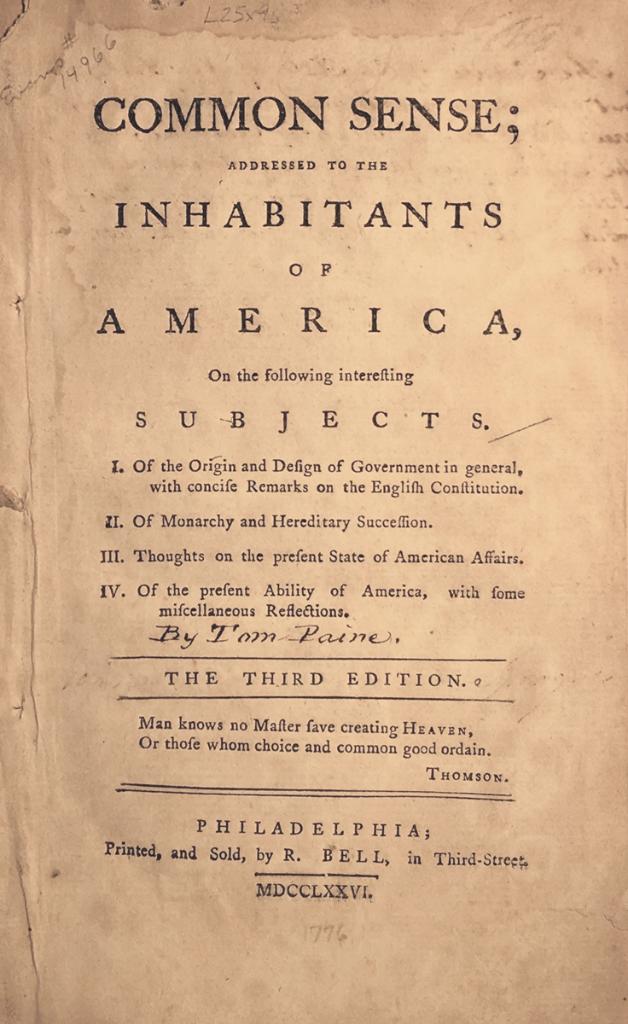 PAINE, THOMAS. Common Sense; Addressed to the Inhabitants of America . . . the third edition [bound with:] Large Additions to Common Sense

FIRST EDITION, FIRST PRINTING sheets of Common Sense, here with the third edition title page and prefatory leaf. Richard Gimbel’s definitive study identifies points in every gathering distinguishing the three editions that Bell printed in early 1776. This copy of Common Sense contains all of the points of the first printing, save the two-leaf gathering [A]2 (title and preface). Bound in at the end is Paine’s Large Additions to Common Sense, which Bell pirated from a competitor and offered separately for one shilling to buyers of Common Sense.

“Paine’s Common Sense, published anonymously in January 1776, was the first vigorous attack on King George … and the first public appeal for an American Republic. It is not too much to say that the Declaration of Independence of July 4, 1776, was due more to Paine’s Common Sense than to any other single piece of writing” (Streeter).

Born in England in 1737, Paine moved to London in 1774 where he met Benjamin Franklin, who encouraged him to emigrate to America. Franklin provided Paine with letters of introduction to his son William Franklin, royal governor of New Jersey, and his son-in-law Richard Bache, an influential merchant in Philadelphia. Paine arrived in America in November 1774, an unemployed 37-year old immigrant. Through Franklin’s influence, the brilliant but unpolished Paine gained access to many leading American intellectuals and soon became editor of the Pennsylvania Magazine.

Within one year of his arrival, Paine was working on early drafts of Common Sense, which was published on January 10, 1776. The pamphlet, which immediately became the most talked-about publication in America, made Paine a the leading voice of revolution. Common Sense is brilliant in its simplicity and contains many of the most memorable phrases of the revolutionary period. Paine wrote, “in America the law is King. For as in absolute governments the King is law, so in free countries the law ought to be King; and there ought to be no other. … A government of our own is our natural right … it is infinitely wiser and safer, to form a constitution of our own in a cool deliberate manner, while we have it in our power, than to trust such an interesting event to time and chance.” It was “the most brilliant pamphlet written during the American Revolution, and one of the most brilliant pamphlets ever written in the English language” (Bernard Bailyn).

“The immediate success and impact of Common Sense was nothing short of astonishing. … Common Sense went through twenty-five editions and reached literally hundreds of thousands of readers in the single year 1776 … The pamphlet’s astonishing impact stemmed from the fact that it appeared at precisely the moment when Americans were ready to accept Paine’s destruction of arguments favoring conciliation and his appeal to latent republicanism, to the material interests of the colonists and to the widespread hopes for the future of the New World. … By doing all this in a new style of writing and a new political language, Paine ‘broke the ice that was slowly congealing the revolutionary movement’” (Foner, Tom Paine and Revolutionary America).

Together with the Declaration of Independence, the Constitution, and The Federalist, Common Sense is one of the fundamental documents of the birth of our nation. The most recent census of Common Sense locates seventeen complete first editions. Only two of these remain in private hands, and neither is likely to appear for sale. The present volume, containing the first edition sheets, is the most desirable available copy of Common Sense, perhaps the most influential book in American history.