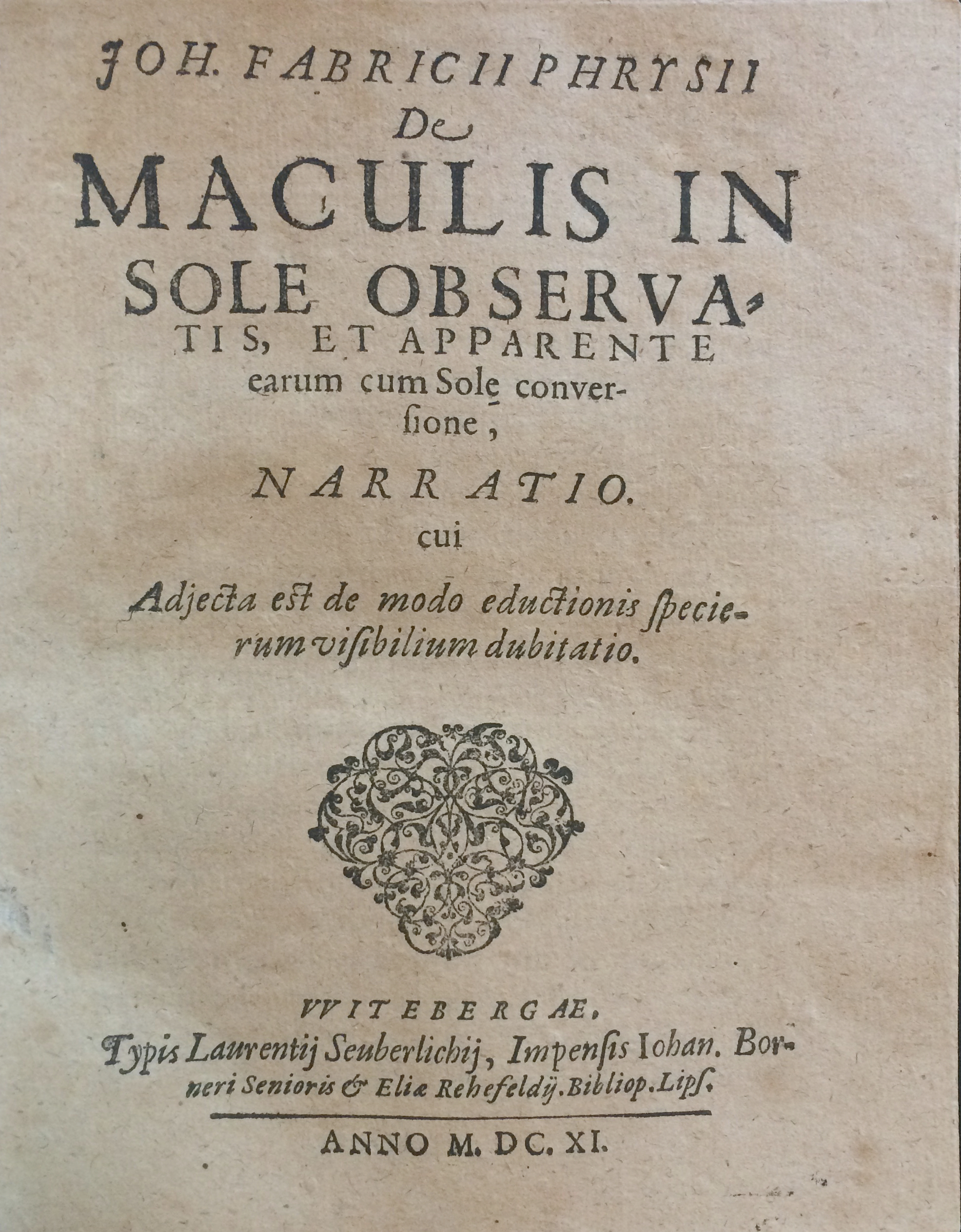 FIRST EDITION of Fabricius’s Account of Spots Observed on the Sun and of their Apparent Rotation with the Sun, the first printed work on sunspots.

This volume is a landmark of the Copernican revolution in astronomy. Fabricius describes his observation of sunspots and correctly interprets them as part of the surface of the sun and as evidence of its rotation. This contrasts with the later publications by Scheiner (who saw the maculae as solar satellites) and Galileo (who considered them “clouds” above the surface of the sun). Kepler himself, having observed a sunspot using a camera obscura, interpreted the phenomenon as Mercury transiting the sun.

“Johann Fabricius was one of the first astronomers to observe sunspots with a telescope, and was the first person to publish an account of his observations. Fabricius was the eldest son of the famed astronomer, astrologer, and Lutheran Pastor David Fabricius (1564-1617), who was a friend of Johannes Kepler and correspondent of Tycho Brahe, Willem Blaeu, Simon Mayr and others. … While in Leiden, sometime near the end of 1610, Fabricius acquired one or more telescopes, which he brought home to his father’s house in Osteel, East Frisia.

“Already well aware of the astronomical potential of the telescope from Galileo Galilei’s Sidereus Nuncius, the father-and-son team began telescopic observations, on the lookout for something new. Johann first noticed sunspots at sunrise on 9 March 1611 … and for many weeks following was engaged with his father in daily observations whenever the weather permitted. Most of their observations were carried out via the camera obscura technique, which consists of forming a projected image of the Sun through a pinhole opening into a suitably darkened room. They had first observed the Sun directly through the telescope, a harrowing experience that Johann related in his this work” (Biographical Encyclopedia of Astronomers).

“‘Having adjusted the telescope, we allowed the sun’s rays to enter it, at first from the edge only, gradually approaching the center, until our eyes were accustomed to the force of the rays and we could observe the whole body of the sun. We then saw more distinctly and surely the things I have described [sunspots]. Meanwhile, clouds interfered, and also the sun hastening to the meridian destroyed our hopes of longer observations, for indeed it was to be feared that an indiscreet examination of a lower sun would cause great injury to the eyes, for even the weaker rays of the setting or rising sun of the inflame the eye with a strange redness, which may last for two days, not without affecting the appearance of objects.”

Fabricius correctly identified the spots as part of the sun itself. Changes in their apparent shape and speed as they moved across the solar disk indicated an axial rotation of the sun. Fabricius knew of this as a theoretical possibility from the writings of his father’s friend Kepler. In his 1609 Astronomia Nova Kepler postulated solar rotation as the force responsible for planetary orbital motion. Fabricius had found the evidence Kepler lacked.

“Johannes correctly concluded that the spots were on the sun’s surface, rather than being the result of clouds or planetary transits. … His father, David, disagreed with his son’s conclusion, still clinging to the old Ptolemaic cosmology … While Kepler read the pamphlet and admired it, Galileo and Scheiner were mostly likely unaware of its existence when they published their own sunspot treatises in January and March 1612, respectively. … All those sunspot sightings, combined with the moons of Jupiter and other mounting evidence, constituted a tipping point among astronomers, including Scheiner, who abandoned his earlier stance that sunspots were solar satellites within ten years. The Copernican model of the solar system replaced the old Ptolemaic model within a generation” (American Physical Society News, March 2015).

“Following his death, and that of his father, the young Fabricius was eclipsed in the priority controversy then flaring between Galilei and the Jesuit Christoph Scheiner over the discovery of sunspots. In their writings, both Kepler and Simon Mayr attempted to establish Fabricius’s precedence on the topic, but to no avail. It was only in 1723, following the discovery of a copy of his 1611 pamphlet, that Fabricius’s remarkable deductions regarding sunspots and solar rotation” were rediscovered (BEA).

EXTREMELY RARE. No copy has appeared at auction in the past fifty years. Only three copies are located in the United States (Yale, Oklahoma History of Science Collection, and Tulane). This work is lacking from all of the great American astronomy collections including that of Harvard and the Harvard Observatory.