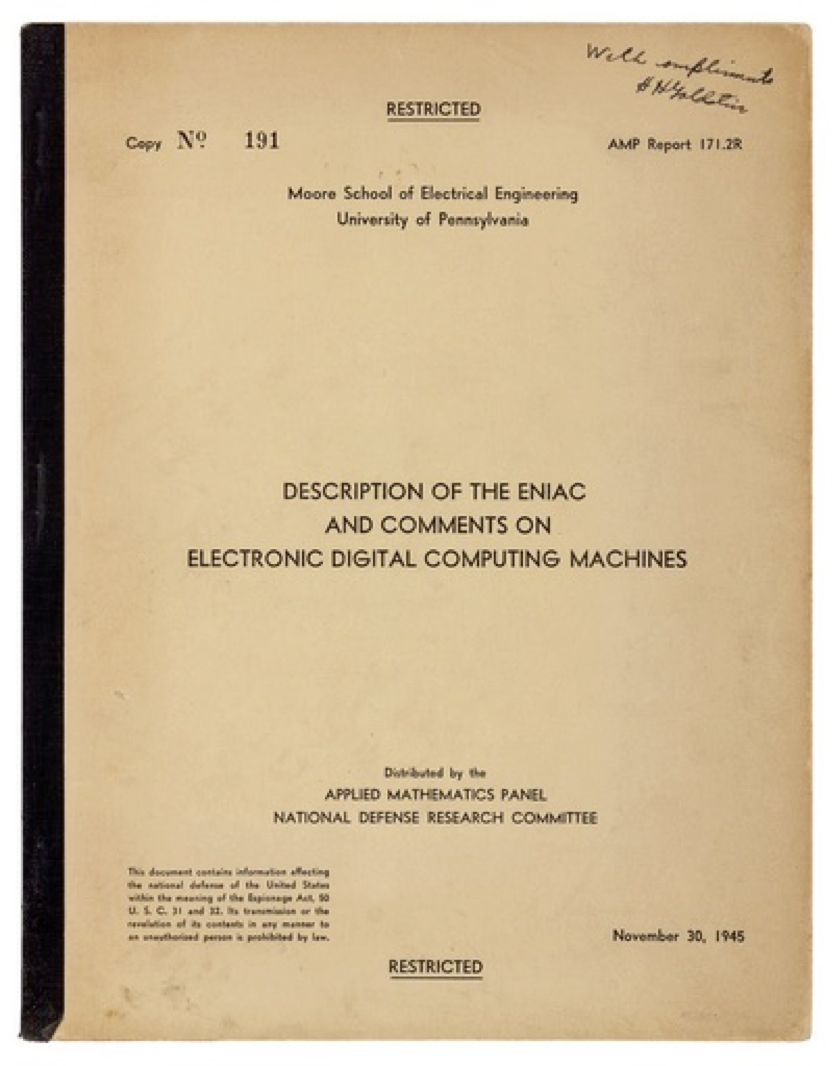 landmark in the history of computing

FIRST EDITION of the rare internal first report on the operational ENIAC, “the world’s first large-scale electronic general-purpose digital computer.” This is copy number 191, marked “Restricted.” Inscribed and signed by Herman H. Goldstine, co-author and one of the project founders.

A landmark in the history of computing, the ENIAC (Electronic Numerical Integrator and Computer) was developed in secret at Penn’s Moore School to aid in the creation of artillery firing tables. The war ended before the computer was completed, and so its power was applied to the design of the hydrogen bomb. Its first real task, supervised by Los Alamos scientists in November 1945, involved millions of calculations associated with top-secret studies of thermonuclear chain reactions.

Description of the ENIAC marks the beginning of the computing revolution following World War Two. Eckert, Mauchly, Goldstine, and Brainerd issued the report in November 1945, and the device was unveiled to the public in February 1946. One month later Eckert and Mauchly left the Moore School to found the Electronic Control Company, the first electronic computer company.

“The report contained a detailed description of ENIAC, the world’s first large-scale electronic general-purpose digital computer, as well as chapters on the need for high-speed computing machines, the advantages of electronic digital machines, design principles for high-speed computing machines, and reliability and checking. At the end are three appendices discussing ENIAC’s arithmetic operations, programming methods, and general construction data. This may have been the earliest published report on how the first electronic computer was programmed. Even though the ENIAC was not a stored-program computer its design and mode of operation involved numerous programming firsts. The report also provided information on the planned stored-program EDVAC, which was then in an early design stage. For the three years between May 1945 and June 1948, ENIAC remained the only functioning electronic, general purpose digital computer in the world” (Origins of Cyberspace).

RARE: only one other copy appears in the auction records of the past twenty years. That example, the Norman Origins of Cyberspace copy, made $14,910 in 2008. Origins of Cyberspace locates only six copies (UCLA, Iowa State, Brown, Carnegie Library of Pittsburgh, Penn, and Hagley). The report was issued with a “Restricted” classification. The list on the inside front cover notes that copies were distributed to ninety-one military, Office of Scientific Research and Development (OSDR), and National Defense Research Committee (NDRC) personnel.

From Gutenberg to the Internet 8.2. Origins of  Cyberspace 1107.