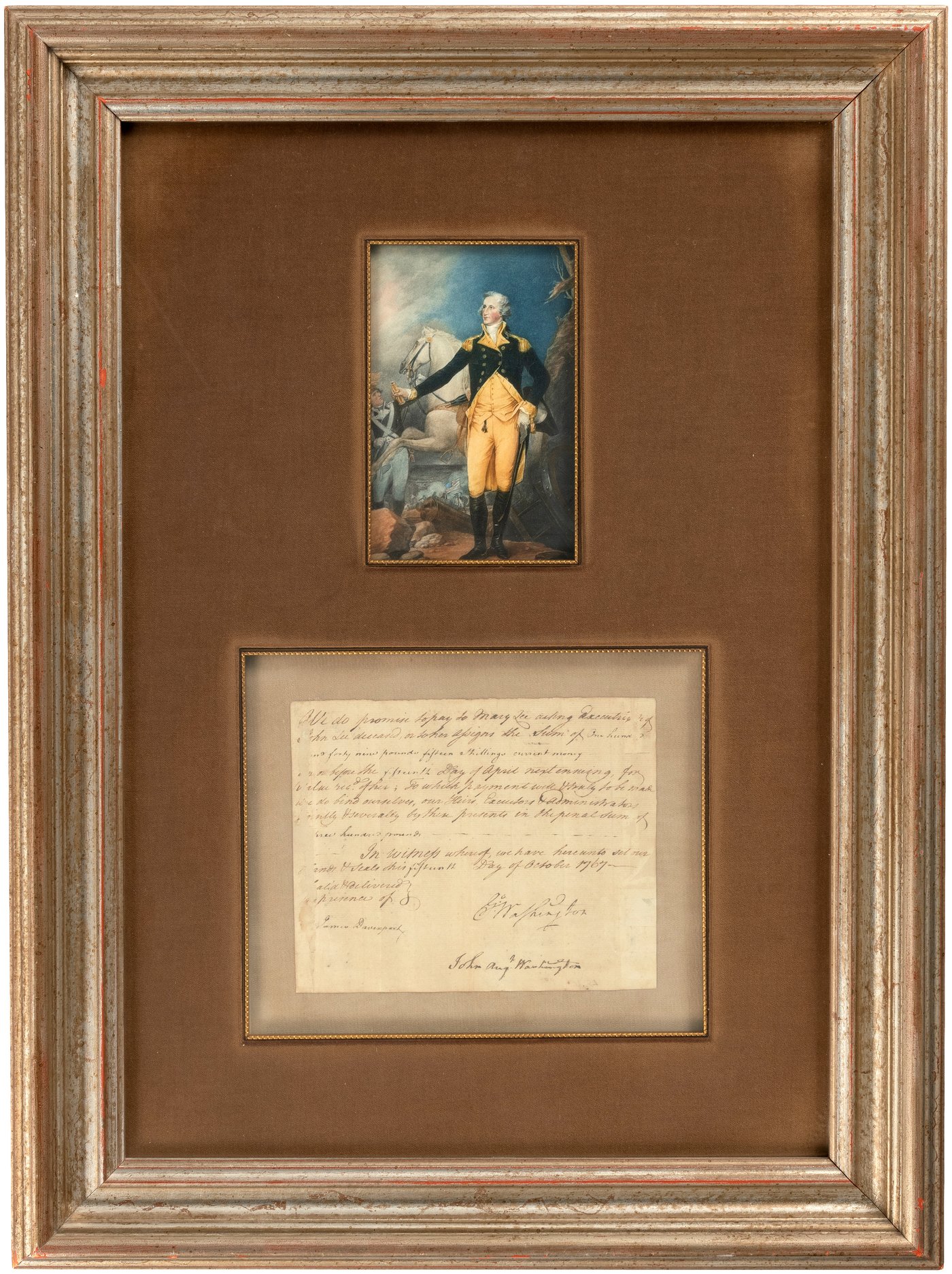 George Washington purchases his personal valet and aide William Lee, the only person freed immediately in Washington’s will

George Washington and his most valued enslaved person, William Lee. With this document George Washington purchases Will (or Billy) Lee, who went on to serve in bondage for decades at Washington’s side during the Revolutionary War and at Mount Vernon. Because of his intimate association with Washington, “Billy Lee was undoubtedly the most widely publicized slave in eighteenth-century America” (Hirschfeld, George Washington and Slavery: A Documentary History).

William Lee spent two decades alongside George Washington, accompanying him wherever he went. As his valet, Lee assisted Washington in all manner of everyday tasks. An outstanding huntsman, the athletic Lee appears to have been one of the few Virginians whose horsemanship approached that of Washington. Lee was at Washington’s side throughout the war, providing fresh horses, undertaking special tasks, holding Washington’s spyglass, tending to his papers, and organizing his personal affairs. Everyone who encountered Washington also met Lee, and he appears in numerous early accounts and in some of the most famous paintings of Washington and his family.

“Spending more than seven years in close proximity during the intensity of war seems to have made Washington and Lee’s relationship especially close. The former’s views on slavery shifted significantly during the war, and he emerged with a newfound abhorrence of slavery and a commitment to neither buy nor sell enslaved people and to avoid separating enslaved families. Many factors likely influenced Washington’s evolution, but his close relationship with William Lee may have helped him understand more fully the humanity of those he enslaved” (Mount Vernon website).

William Lee returned from the war unscathed, but in 1785 he severely damaged his knee accompanying Washington on a surveying expedition. Washington, who described the event in his diary, secured a sled to carry Lee home. An injury to his other knee crippled Lee in 1788. He gamely struggled to continue to serve Washington, but he could not join the new president’s household in New York. Washington’s papers contain numerous references to attempts to provide Lee with medical attention in Philadelphia and to Lee’s efforts to join Washington at the capital. In the end Lee returned to Mount Vernon to live out his days as a shoemaker, sometimes sought out by veterans who remembered him from the heroic days of the Revolution.

In this document Washington agrees to pay £149.15 to Mary Smith Ball Lee, the widow of Captain John Lee. The Mount Vernon ledgers show that this sum purchased the “Mulatto Will” Lee, his brother Frank, and two others enslaved on the Lee plantation. Young Will and Frank, likely the sons of the late Capt. Lee or another white man on his estate, were destined to work in Washington’s household. He satisfied his debt the following spring, as agreed. A ledger entry dated May 3, 1768 states “£149.15 Cash Paid Capt. John Lee” for “Mulatto Will £61.15/ Ditto Frank £50/ Negro Boy Adam £19/ Jack £19.”

Will Lee was the only enslaved person freed immediately in 1799 under the terms of Washington’s will. That document gave freedom to the rest of Washington’s slaves, 123 men, women, and children, only upon the death of his wife Martha. Will was granted his freedom, a $30 annuity, and the right to remain at Mount Vernon if he desired. Washington wrote, “this I give him as a testimony of my sense of his attachment to me, and for his faithful services during the revolutionary war.”

This important document embodies Washington’s conflicted relations with slavery. When he purchased Will Lee in 1767, he sought an outstanding servant in keeping with his sense of honor and propriety as a Virginia gentleman. He relied on an army of enslaved workers, both his own and those of his wife, to make Mount Vernon productive. Still, Washington confessed that slavery at Mount Vernon was an “unavoidable subject of regret” and that he wished to “lay a foundation to prepare the rising generation for a destiny different from that in which they were born.” Late in his life Washington wrote that it was “among my first wishes to see some plan adopted, by the legislature by which slavery in this country may be abolished.” Only upon his death in 1799 did Washington free his slaves, providing an example that few other planters would follow on such a scale.

This document stands as vivid testimony to the complicated legacy of George Washington and the Founding Fathers and to the role of enslaved African Americans in securing American liberty and building the nation.