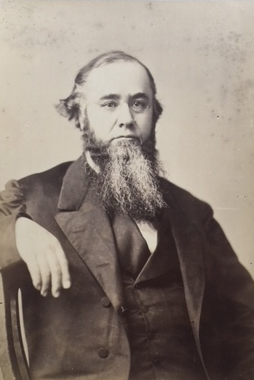 Albumen print (12 ½ x 8 ½ in.), mounted on contemporary board. Mount soiled and worn. Some spotting to background, else the image is generally in good condition.

Edwin A. Stanton, who had been attorney general under James Buchanan, was named secretary of war in January 1862. In that role he was, with the possible exception of William Seward, the most important figure in Lincoln’s cabinet.

“Stanton was one of the central political figures of the Civil War era and one of the most controversial. His principal role was as chief manager under the president of the Union war effort—“Lincoln’s Mars”—and his immense energy and organizational talent made possible the mobilization of the North’s vast resources to achieve victory” (ANB).

This portrait of Stanton is evidently one of the “published” Imperial portraits issued by Brady. “These ‘published’ Imperial prints were announced in the New York Times on August 11, 1858: ‘Brady has just commenced the publication of a series of imperial photographs. The first of the series is an excellent portrait of John J. Crittenden, of Kentucky’ … At 12 x 9 5/8 inches, they were smaller than Brady’s sumptuous Imperial photographs, and issued on paper mounts engraved with the Brady studio location and, sometimes, with the name of the figure pictured. In presentation and style, they resemble mezzotint portraits of earlier centuries. A reduced step from the custom Imperial portrait, though still a photographic process, this new ‘imperial’ format could be mass-produced by the studio and sold commercially to anyone who might like to own a portrait of a famous American statesman” (New York Historical Society).

This is a fine Brady Imperial portrait of Edwin Stanton, one of the central figures of the Civil War.

Offered as part of the "Team of Rivals" collection, for sale en bloc only