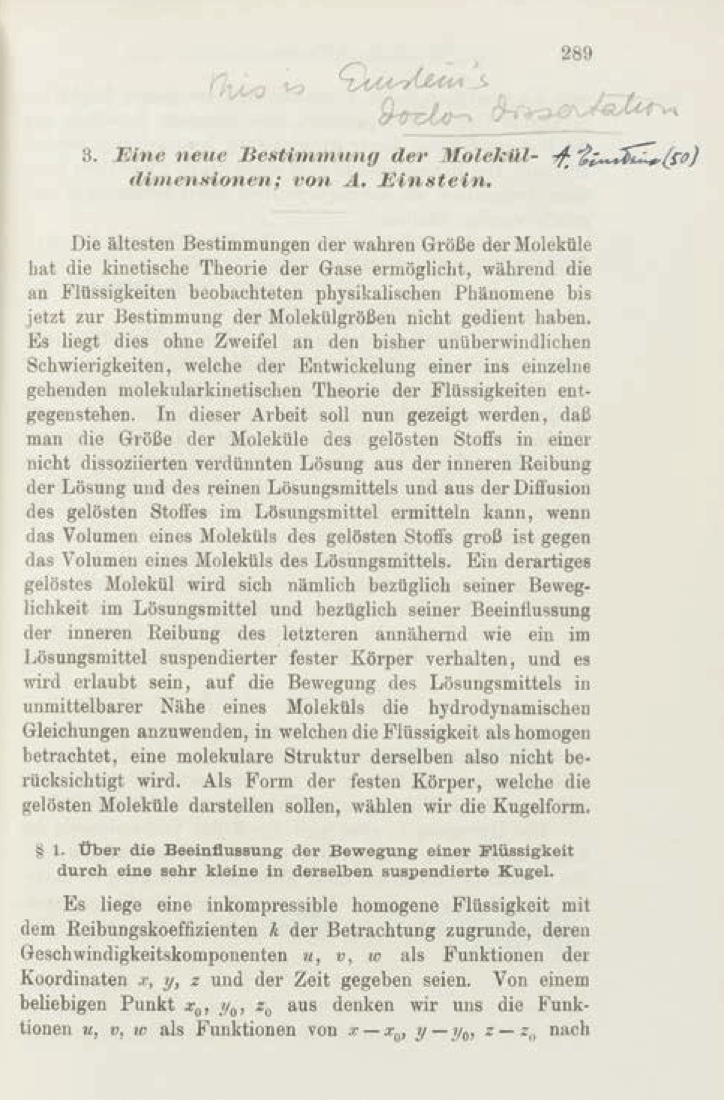 First journal edition of Einstein’s doctoral thesis, revised, and first edition of his second paper on Brownian motion. Signed and dated 1950 by Einstein on p. 289 at the beginning of his thesis.

In this landmark work Einstein “combined the techniques of classical hydrodynamics with those of the theory of diffusion to create a new method for the determination of molecular sizes and of Avogadro’s number, a method he applied to solute sugar molecules. … Einstein’s concerns extended beyond this particular question to more general problems of the foundations of the theory of radiation and the existence of atoms. He later emphasized … ‘A precise determination of the size of molecules seems to me of the highest importance because Planck’s radiation formula can be tested more precisely through such a determination through measurements on radiation.’ The dissertation also marked the first major success in Einstein’s effort to find further evidence for the atomic hypothesis, an effort that culminated in his explanation of Brownian motion. By the end of 1905 he had published three independent methods for determining molecular dimensions …” (Stachel, Einstein’s Miraculous Year. Five Papers that Changed the Face of Physics).

Einstein’s biographer, physicist Abraham Pais, observed: “It is not sufficiently realized that Einstein’s thesis is one of his most fundamental papers. Histories and biographies invariably refer to 1905 as the miraculous year because of his article on relativity, the light-quantum, and Brownian motion. In my opinion, the thesis is on a par with the Brownian motion article. In fact, in some—not all—respects, his results on Brownian motion are by-products of his thesis work. This goes a long way toward explaining why the paper on Brownian motion was received by the Annalen der Physik on May 11, 1905, only eleven days after the thesis had been completed. Three weeks after the thesis was accepted, this same journal received a copy [of the thesis] for publication. It was published only after Einstein supplied a brief addendum in January 1906. … As a result of these various delays, the thesis appeared as a paper in the Annalen der Physik only after the Brownian motion article had come out in the same journal. This may have helped create the impression in some quarters that the relation between diffusion and viscosity—a very important equation due to Einstein and Sutherland—was first obtained in Einstein’s paper on Brownian motion. Actually, it first appeared in his thesis …” (Pais, Subtle is the Lord, pp. 89-90).

Provenance: signed by Einstein for Lewis Strauss, Chairman of the Atomic Energy Commission.