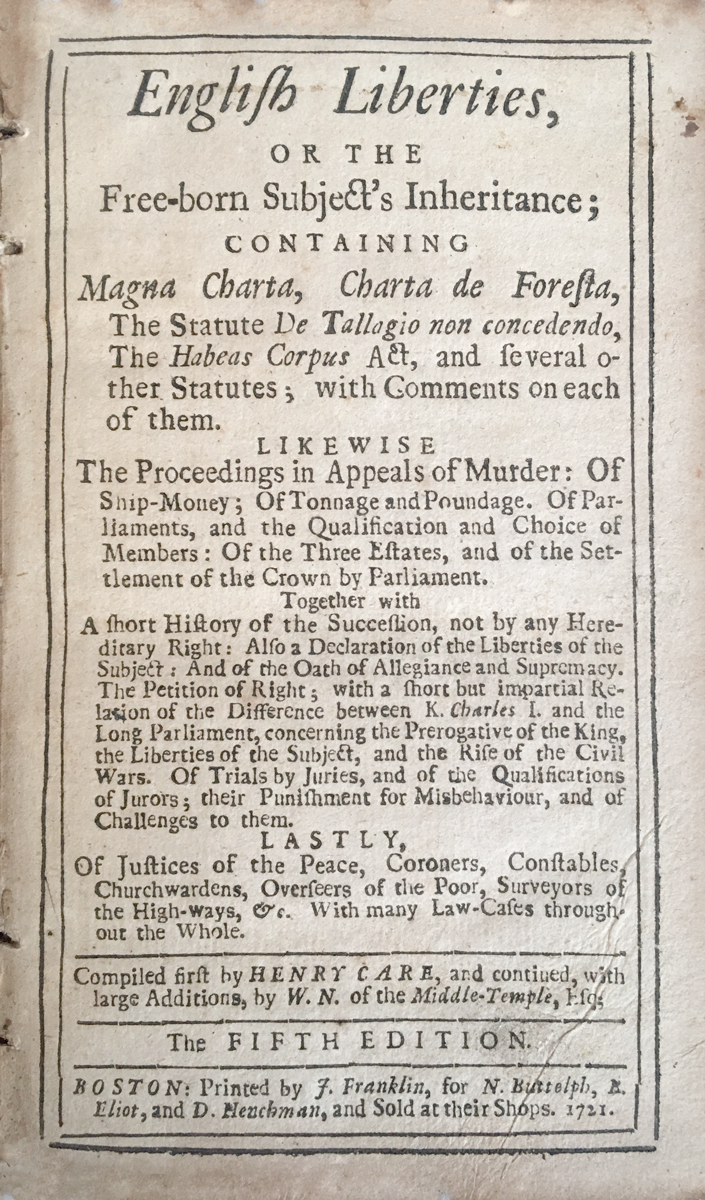 First American Magna Carta and other documents of liberty

FIRST AMERICAN EDITION. This volume, one of the very first law books printed in colonial America, contains the first American printing of Magna Carta and other fundamental documents of individual liberty in Anglo-American law. Magna Carta has become “a sacred text, the nearest approach to an irrepealable ‘fundamental statute’ that England has ever had” (Pollock & Maitland).

“Care intended his English Liberties to provide uneducated and inexperienced English persons with documents and information about the law and their rights… praising England’s ‘fundamental laws [as] coeval with government’ and describing the Magna Charta as ‘Declaratory of the principal grounds of the Fundamental Laws and Liberties of England.’ Celebrating law in another piece as second only to the gospel, he described it in English Liberties as ‘the Best Birthright the Subject hath… Care regarded the essence of this birthright as the ‘privilege not to be exempt from the law of the land, but to be freed in Person and Estate from Arbitrary Violence and Oppression” (Morrison & Zook, Revolutionary Currents).

In America, English Liberties “played an important role in spreading concepts about English law, history, government, liberties and especially juries… Colonists found in Care’s English Liberties support of their views about the Saxons, Magna Charta as a reaffirmation of old laws guaranteeing the rights of all freemen, and ways to protect themselves against oppression” (Schwoerer, Ingenious Mr. Henry Care).

English Liberties “had more to do with preparing the minds of American colonists for the American Revolution than the larger but less accessible works of Coke, Sidney and Locke” (Hudson, William Penn’s English Liberties).

Benjamin Franklin helped to print this book as a 15-year old apprentice at his brother James’s Boston printing shop. This was probably Franklin’s first exposure to the principles of individual liberty to which he devoted much of his life. The book “contained the most important documents and statements in English history and law concerning liberty, property, and the rights of the individual … Franklin knew its contents thoroughly” (Lemay).

English Liberties “was less a practical handbook than a statement and record of the great legal and political principles which formed the proud inheritance of the British peoples at home and abroad. These matters were ever present in the minds of the colonists” (Wroth). Thomas Jefferson owned two editions of English Liberties, and the book was in many other libraries of the Founders.