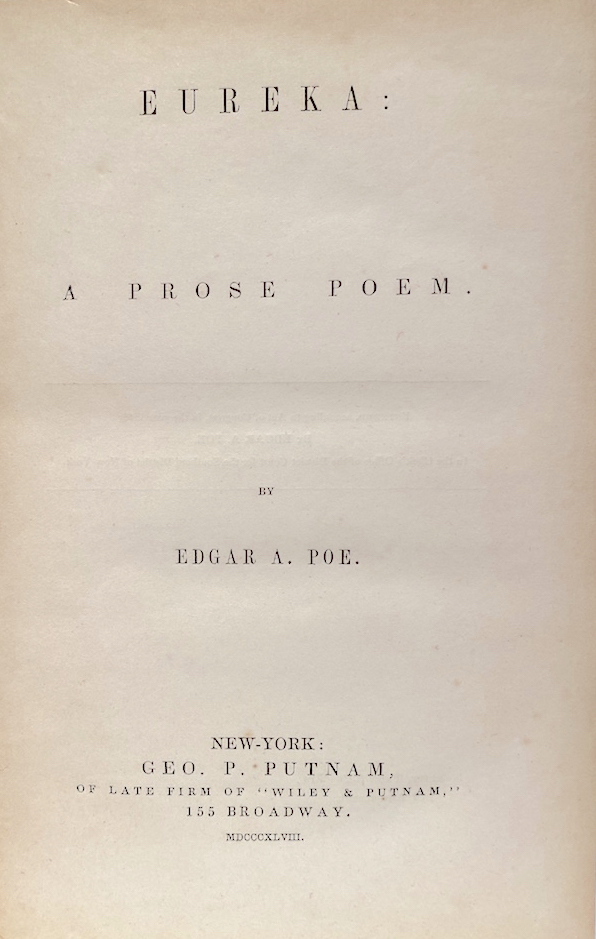 Original black cloth (binding A). Spine ends neatly restored, scar to upper board. Even browning to text. An attractive copy. Half morocco case.

FIRST EDITION, FIRST ISSUE (i.e. without the review for Eureka on page 2 of the 16 pp catalogue). This is one of only 500 copies of Poe’s last book.

“To the few who love me and whom I love–to those who seek rather than to those who think–to the dreamers and those who put faith in dreams as in the only realities–I offer this book of truths . . .” – Preface to Eureka

Poe considered Eureka his magnum opus. Putnam recalled that Poe visited him “with a somewhat nervous and agitated manner” and proposed a first edition of 50,000 copies. Putnam agreed to publish 500 copies. Eureka has often been misunderstood, but it is in fact a remarkable precursor of several modern theories of physics and a powerful essay on the material and spiritual universe.

For example, a March 19, 1991 New York Times article on the dark-sky or Olber’s paradox–the question of why the sky is dark at night–mentions Poe. According to Olber’s paradox, if one assumes that the stars are essentially infinite in number and distributed uniformly, then the night sky should be ablaze with light rather than shrouded in darkness. Today’s generally accepted explanation for this contradiction between logic and observation depends on two facts: the fixed speed of light, which implies that some light has yet to arrive here; and the aging of galaxies, with the implication that they can put out only a finite amount of light.

Poe’s formulation was strikingly similar, for he hypothesized that the universe began at a set point in the past and was finite rather than infinite. In arguing that the Universe of Stars must be finite, he appeals to the evidence of observed experience. Poe wrote,  “Were the succession of stars endless, then the background of the sky would present us an uniform luminosity, like that displayed by the Galaxy–since there could be absolutely no point, in all that background, at which would not exist a star. The only mode, therefore, in which, under such a state of affairs, we could comprehend the voids which our telescopes find in innumerable directions, would be by supposing the distance of the invisible background so immense that no ray from it has yet been able to reach us at all. That this may be so, who shall venture to deny?  I maintain, simply, that we have not even the shadow of a reason for believing that it is so.”