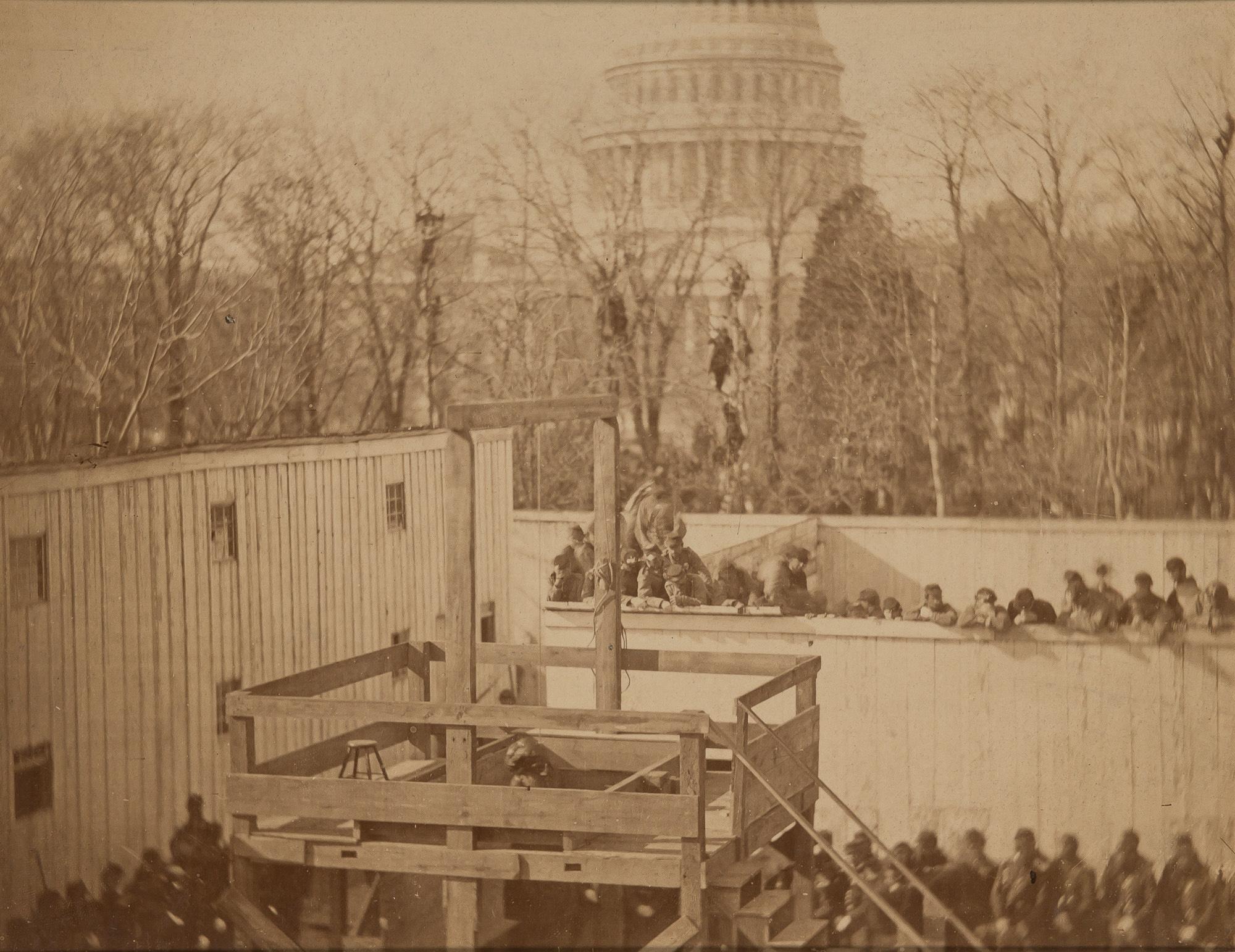 These famous photographs by renowned Civil War photographer Alexander Gardner  documents the execution of Andersonville prison commandant Henry Wirz. The event took place on November 10, 1865 in the courtyard of the Old Capitol Prison, now the site of the U.S. Supreme Court. 120 soldiers guarded the crowd of 200 spectators, while more onlookers clung to trees outside the prison yard. Gardner, who had photographed the execution of the Lincoln assassination conspirators in July, documented the event.

At its peak Andersonville held 32,000 men, making it larger than all but four cities in the South. Inhumane conditions and overcrowding led to a staggering death rate. 13,000 of the 45,000 men imprisoned there died. An outraged public demanded punishment, and after the war Wirz was tried and convicted for conspiracy and murder.

This first view shows the death warrant being read atop the scaffold. “Wirz himself is almost completely obscured in this image, sitting on a stool with only part of his right shoe visible, right center. The second view shows Wirz’s hooded head just below the level of the gallows platform after the drop. The Annapolis Gazette of November 16, 1865 identifies most of those present on the scaffold in the first view. As Major G. B. Russell, Provost Marshal of the District of Columbia, reads the death warrant, Wirz’ spiritual advisers, Rev. Frs. Boyle and Wiggett (or Wiget), minister to the condemned man. At left, Captain G. R. Walbridge, in command of the Old Capitol Prison, confers with a taller man in civilian clothes, presumably Sylvester Ballou, a military detective assigned to act as Wirz’ executioner. The bareheaded man at right is not mentioned in the account. The guards are part of the Veteran Reserve Corps, assigned to the Old Capitol Prison. The time is about 10:20 a.m.” (Andy Hall, Dead Confederates).

These Alexander Gardner photographs present rare documentation of the resolution of a landmark war crimes trial.