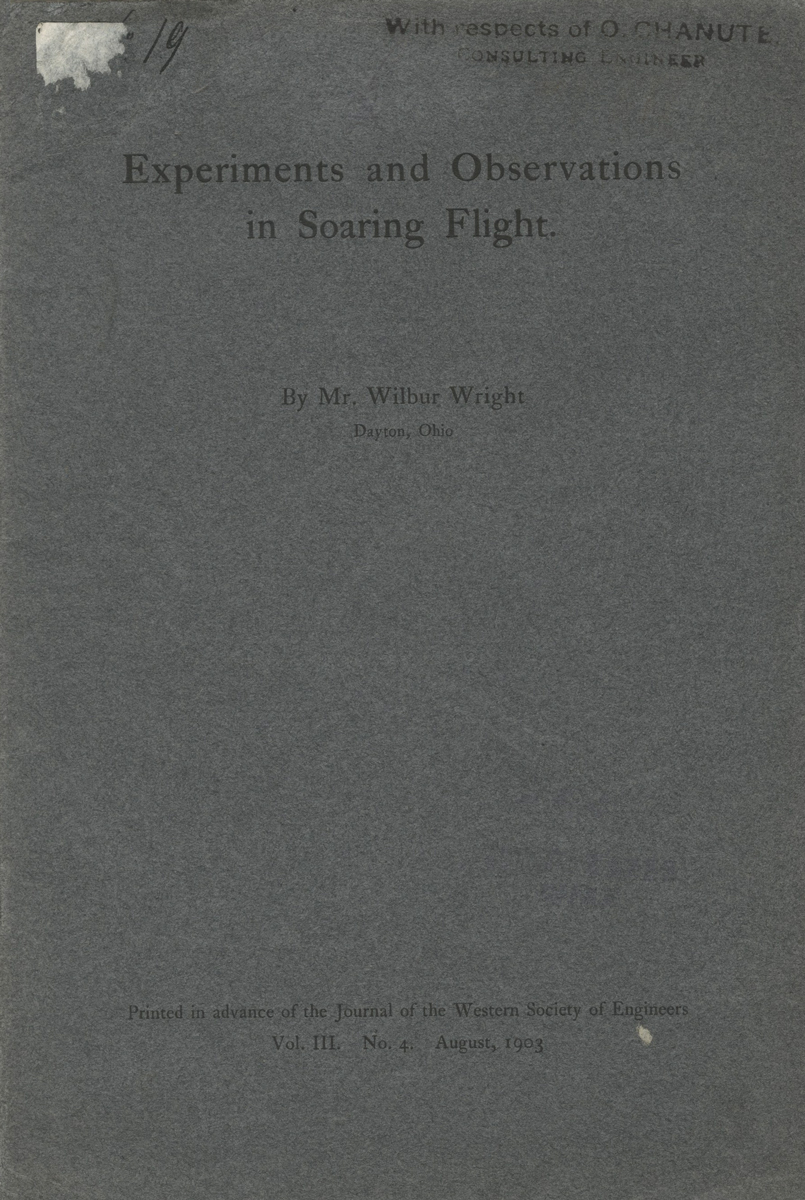 The Wright Brothers' most important publication

WRIGHT, WILBUR. Experiments and Observations in Soaring Flight. Offprint from: Journal of the Western Society of Engineers 8 [misprinted “III” on front wrapper], no. 4 (August, 1903)

FIRST EDITION, offprint issue. Presentation copy with the stamp of the Wrights’ advisor, mentor, and chief promoter, aviation pioneer Octave Chanute. Chanute was the most important figure in aviation from 1890 to 1910.

This is the first account of the Wrights’ experiments with motorized gliders. After the glider trials of 1901, the Wrights constructed a wind tunnel in Dayton used for a series of tests of over 200 wing and bi-plane combinations. The men then built a new glider, equipped with a vertical rear rudder which offset the twisting movements caused by the warping of the wings. This report describes the nearly one thousand trial flights made during the summer of 1902 with this superior machine. The machine functioned well. Wilbur declared, “the machine seemed to have reached a higher state of development than the operators” (p. 8). The second objective of the 1902 experiments was “to obtain data for the study of scientific problems involved in flight” (p. 10). Both goals were realized during the six months following the presentation of this report. On December 17, 1903, the Wright Brothers made the first motorized flight in history at Kill Devil Hills, south of Kitty Hawk.

Provenance: 1. Octave Chanute (1832-1910), civil and aeronautical engineer, advisor of the Wright brothers (presentation stamp “With respects of O. Chanute, consulting engineer,” on front wrapper).   2. Wilhelm Kress, Vienna, with his stamp. Kress was an Austrian engineer whose flying machines were among the most promising of the pre-Wright era.