HOME  >  Browse  >  Rare Books  >  Landmark Books  >  First State of the Union Address, signed in type by Washington in Gazette of the United States 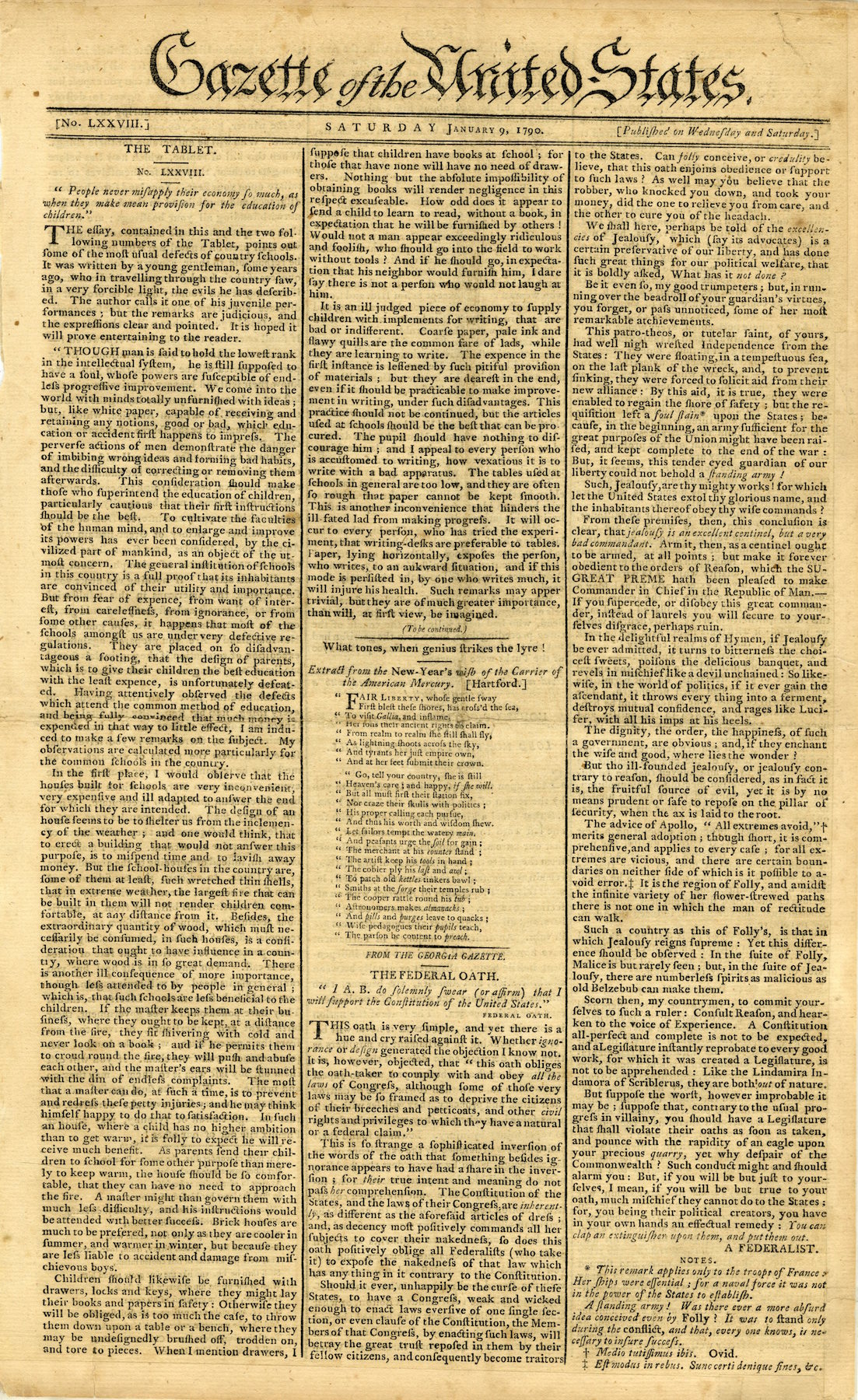 the first State of the Union address

WASHINGTON, GEORGE. First State of the Union Address, signed in type by Washington in Gazette of the United States

The Constitution enumerates the duties of the president including “He shall from time to time give to Congress information of the State of the Union and recommend to their Consideration such measures as he shall judge necessary and expedient” (Article II, section 3).

George Washington began the tradition of the State of the Union address when he spoke before both houses of Congress at Federal Hall in New York on January 8, 1790. The address was first printed in the following day’s newspapers. Washington opened by expressing his pleasure in the nation’s progress, the addition of North Carolina to the union, and the “concord, peace, and plenty with which we are blessed are circumstances auspicious in an eminent degree to our national prosperity.”

Reminding Congress that “to be prepared for war is one of the most effectual means of preserving peace,” Washington called for the establishment of a plan for national defense. Other measures he urges include the establishment of a uniform rule of naturalization, the creation of a uniform system of currency, weights, and measures, the promotion of trade, and “the advancement of agriculture, commerce, manufactures … the promotion of Science and Literature.”

Washington saw an educated citizenry as essential to the republic’s survival. He declared, “Knowledge is in every country the surest basis of public happiness. In one in which the measures of government receive their impressions so immediately from the sense of the community as in ours it is proportionably essential. To the security of a free constitution it contributes in various ways—by convincing those who are intrusted with the public administration that every valuable end of government is best answered by the enlightened confidence of the people, and by teaching the people themselves to know and to value their own rights; to discern and provide against invasions of them; to distinguish between oppression and the necessary exercise of lawful authority; between burthens proceeding from a disregard to their convenience and those resulting from the inevitable exigencies of society; to discriminate the spirit of liberty from that of licentiousness—cherishing the first, avoiding the last—and uniting a speedy but temperate vigilance against encroachments, with an inviolable respect to the laws.”

Washington concluded, “The welfare of our country is the great object to which our cares and efforts ought to be directed.—And I shall derive great satisfaction from a cooperation with you in the pleasing though arduous task of insuring to our fellow citizens the blessings which they have a right to expect from a free, efficient, and equal government.”

Washington continued to deliver a State of the Union address before Congress each year through 1796. Thomas Jefferson, who considered the practice monarchical, chose to deliver his message in writing, an approach that continued into the 20th century. Franklin Roosevelt resumed Washington’s practice of a speech before a joint session of Congress, and the State of the Union address continues to be a key event in American political life to this day.

Rare in the market, with no examples in ABPC.

The first State of the Union address is a landmark document in American history.