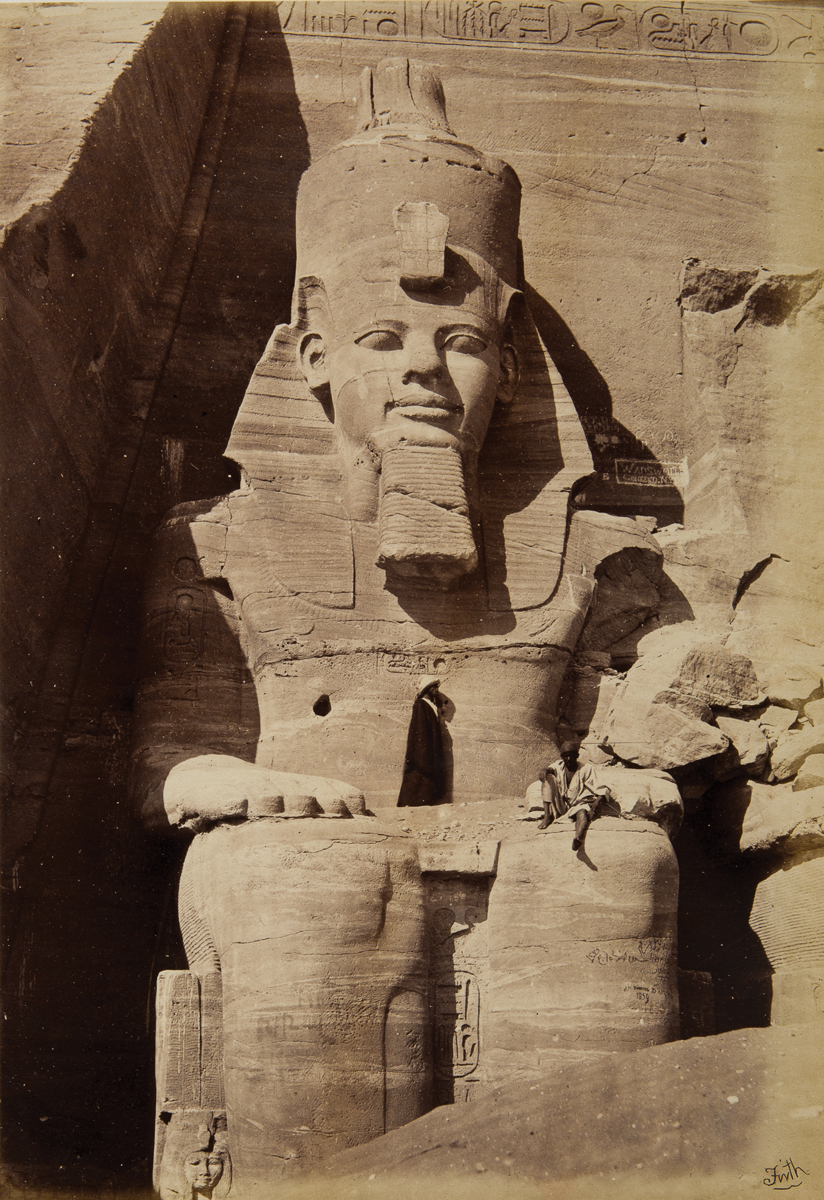 Three volumes. Folio. Original green cloth, gilt-lettered, rebacked in green morocco, a.e.g. 111 albumen photographs (37 in each volume), each approx. 61⁄2 x 9 inches, mounted. Most signed in the negative and with the occasional date 1857. Foxing to mounts, infrequently affecting images, occasional fading to prints. The photographs are generally in very good condition with rich tones and good contrast.

A handsome set of Frith’s photographs. This edition’s gold-toned photographs are preferred over the earlier editions for their “stronger quality” (Gernsheim). These “lavishly produced volumes of image and text, offered by subscription, were intended for a cultured, well-educated audience” (Hannavy).

In 1856-58, Francis Frith made two expeditions, first to Egypt and then to Palestine, to photograph the great sites of antiquity, preserving the views for future generations and making them accessible to people around the world.

Working with volatile chemicals and cumbersome apparatus in inhospitable conditions, Frith developed most of his plates in tombs, temples, and caves. For Frith, photography was destined to rank with other pictorial arts and even to surpass them, because at its heart was “its essential truthfulness of outline, and to a considerable extent, of perspective and light, and shade.” Frith’s books “proved immensely popular, [their] combination of remarkable photographic views with Frith’s first-hand written account providing a surrogate tour of the Near East for Victorian tourists and would-be tourists alike” (Hannavy).

These albums contain some of Frith’s finest photographs, including the series of panoramic views of Jerusalem, the Sphinx and Great Pyramid of Giza, Colossal Figure at Abou Simbel, Karnak, the Pool of Hezekiah, the Thebes Entrance to the Great Temple Luxor, the Osiridae Pillars and Great Fallen Colossus, and many others. They encompass spectacular views of Jerusalem (among the earliest images of the ancient city still obtainable), Cairo, the pyramids at Giza, Philae, and other views of now-lost or decayed sites in Egypt, as well as biblical sites in Palestine including the Dead Sea, Gaza, Damascus, and other areas of what is now the modern state of Israel.

These magnificent photographs provide a permanent record of lost or deteriorating places and monuments that are central to human history.