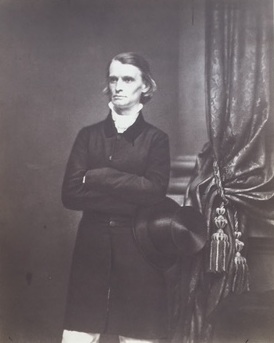 This is a dramatic full-length standing salt print portrait of Gov. Henry A. Wise by Mathew Brady.

Wise served for years in Congress as a Jackson Democrat and later was governor of Virginia in 1856-60. One of his last official acts was to sign John Brown’s death warrant. An ardent secessionist, Wise planned the seizure of the federal arsenal at Harpers Ferry to provoke secession, but the events at Fort Sumter preempted that action.

Wise was commissioned a brigadier general in the Confederate Army, though he had no military training. He served for the duration of the war, ultimately surrendering with Lee at Appomattox. He was “one of the most notable ‘political generals’ on either side” (ANB).

This portrait of Wise is evidently one of the “published” Imperial portraits issued by Brady. “These ‘published’ Imperial prints were announced in the New York Times on August 11, 1858: ‘Brady has just commenced the publication of a series of imperial photographs. The first of the series is an excellent portrait of John J. Crittenden, of Kentucky’ … At 12 x 9 5/8 inches, they were smaller than Brady’s sumptuous Imperial photographs, and issued on paper mounts engraved with the Brady studio location and, sometimes, with the name of the figure pictured. In presentation and style, they resemble mezzotint portraits of earlier centuries. A reduced step from the custom Imperial portrait, though still a photographic process, this new ‘imperial’ format could be mass-produced by the studio and sold commercially to anyone who might like to own a portrait of a famous American statesman” (New York Historical Society).

This is an impressive standing salt print Imperial portrait of a leading figure of the Confederacy.