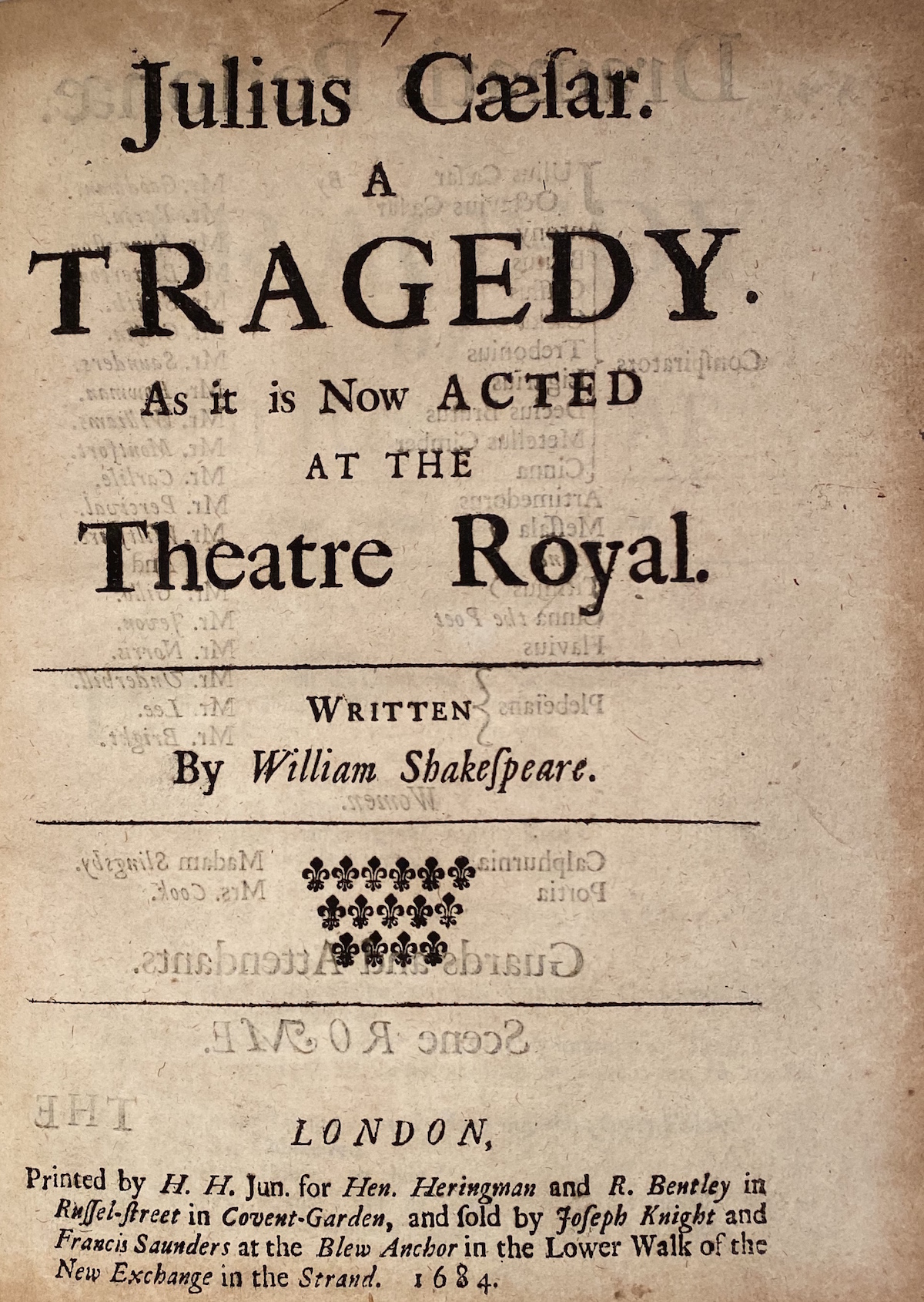 FIRST QUARTO EDITION of Julius Caesar, the first separate edition of one of Shakespeare’s best-known and most-performed plays.

“Something extraordinary was beginning to happen as Shakespeare wrote Julius Caesar in the spring of 1599… as if all his energies were self-consciously focused on a new and different kind of invention… The result was a significant breakthrough,” one expressed in “the extraordinary lines of Brutus, deep in thought, as he sets in motion one of the most consequential events in Western history. It is one of Shakespeare’s first great soliloquies and conveys a sense of inwardness new to the stage” (Shapiro, Year in the Life).

Julius Caesar was first performed in 1599 at the Globe Theatre. After the theaters re-opened at the start of the Restoration era, it became a favorite. “There was no more potent story for seventeenth-century Englishmen than that of Julius Caesar, and it spoke to people across the political spectrum, whether republicans, royalists, or constitutional monarchs” (Roberts, Thomas Betterton). Six quarto editions appeared between 1684 and 1700, an indication of the play’s great popularity in the wake of the 1684 production starring Thomas Betterton as Brutus. Julius Caesar was one of the few Shakespearean plays that was not extensively modified or adapted during the Restoration period and the eighteenth century.

The play has been a touchstone of popular culture for centuries. One of the earliest cultural references was in Shakespeare’s own Hamlet. When Hamlet asks Polonius about his career as an actor at university, Polonius replies “I did enact Julius Caesar. I was killed i’ th’ Capitol. Brutus killed me.” This line would have resonated with the Globe audience: Richard Burbage is generally accepted to have played the lead roles Brutus and Hamlet, and John Heminges is thought to have played both Caesar and Polonius.

Countless lines from Julius Caesar are heard to this day in conversation and in references on stage and screen: “Friends, Romans, countrymen, lend me your ears” (Antony), “The evil that men do lives after them; The good is oft interred with their bones” (Antony), “Yond Cassius has a lean and hungry look: He thinks too much: such men are dangerous” (Caesar), “Et tu, Brute?” (Caesar), “This was the most unkindest cut of all” (Antony), “Beware the Ides of March” (the Soothsayer), “There is a tide in the affairs of men. Which, taken at the flood, leads on to fortune” (Brutus), “the fault, dear Brutus, is not in our stars, but in ourselves” (Cassius), and many more.

The first quarto editions of Shakespeare’s plays are among the most sought-after books in English literature.