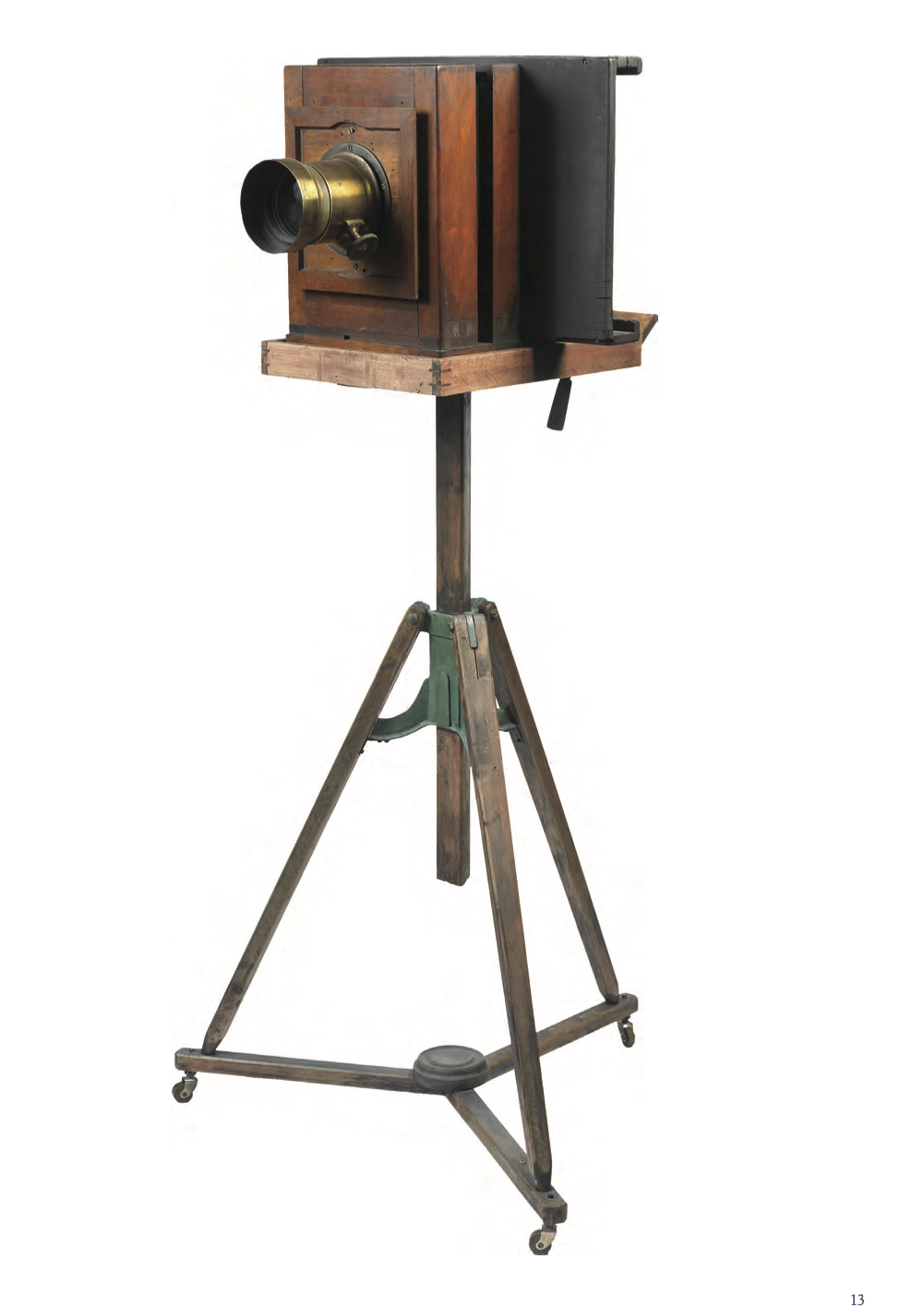 This is an extremely rare, evidently integral Charles Harrison camera. Harrison, a prominent New York lens maker, received international acclaim for his lens designs at the World’s Fair in London. He began his work in photography as a daguerreotypist, but his success in making camera lenses soon led him to abandon photography to concentrate on the manufacture of lenses. This wood camera is fitted with a Petzval-type brass barrel lens signed “C.C. Harrison New York,” with the serial number 1195. According to Eric Taubman, the president and founder of the Penumbra Foundation, the lens dates to 1849 – 1850. The camera features a black fabric bellows, rack and pinion focusing, with wooden knob on rear of back section, and wide casement to accommodate side-loading plates. The camera is mounted on an 11 x 15 in. base rail. It is accompanied by a ground glass plate (glass replaced) for focusing, which allowed 10 3⁄8 x 10 3⁄8 in. exposures, as well as a dark slide.

A major relic of photographic history, this camera was owned by Mathew Brady during his years as the leading figure in American photography. Brady was the preeminent American portrait photographer of his day. He gained his greatest fame with his studio’s documentation of the events and figures of the Civil War. This camera’s association with Brady and his studio, which produced hundreds of iconic portraits and thousands of Civil War photographs, makes it an important historical artifact.

The camera’s Brady provenance is well-documented. It is accompanied by photocopies of original bankruptcy court records signed by Brady during his bankruptcy proceedings in 1873. The document lists this lens and its serial number in an inventory of Brady possessions.

The camera was featured in a September 23, 1957 Life article titled “In Image of the Master, the Famous Photographs of Mathew Brady Are Matched Today with Pioneer’s Own Camera.” Life photographer Ed Clark used the camera offered here to make modern equivalents of Brady portraits. On page 124, Clark is shown using this camera to photograph President Eisenhower in a pose similar to a familiar Lincoln image taken by Brady during the Civil War. An original copy of this issue of Life accompanies the camera.

This camera is also pictured on the inside back cover of Mathew Brady and His World, Produced by Time-Life Books from pictures in the Meserve Collection. The picture is identified: “This camera was used by Brady in the 1860s. To make an exposure, a prepared collodion negative was placed in a light proof holder. The holder was placed in the camera and a panel removed to let the light in.” Frederick Hill Meserve started his celebrated collection of Lincolniana and photography in 1897. In 1902, he made a large purchase of Civil War era Brady negatives. It is believed this camera was a part of that purchase.

Virtually every significant public figure of the Civil War era passed through Mathew Brady’s studio; it is thrilling to imagine that many of his iconic photographs were taken with this very camera. This camera merits a place in a major museum collection.