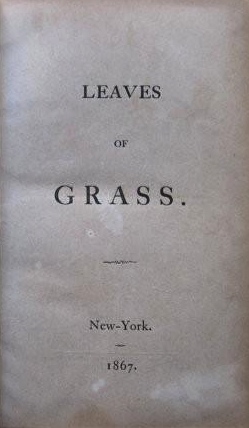 The scarce fourth Leaves of Grass

This is the fourth Leaves of Grass. The failure of Thayer & Eldridge, publisher of the third edition (Boston, 1860), left Whitman in search of a publisher. The poet decided that the events of the Civil War called for another reimagining of Leaves of Grass. Whitman returned to his earlier practice and financed the publication himself, engaging the New York printer William E. Chapin. For the first time, the 1867 Leaves opened with the poem “Inscription,” which introduced the book in subsequent editions.

“In various permutations, Whitman circulated this fourth edition as four separately paginated books stitched together between two covers: a vastly re-edited version of the 1860 Leaves, a reissue of Drum-Taps, a reissue of the Sequel to Drum-Taps, and a striking coda called Songs Before Parting. This most chaotic of all six editions of Leaves contains only six new poems (“Inscription” [later “One’s-Self I Sing” and “Small the Theme of My Chant”], “The Runner,” “Leaves of Grass” number 2 [later “Tears”], “Leaves of Grass” number 3 [later “Aboard at a Ship’s Helm”], “When I Read the Book,” and “The City Dead-House”), but its significance lies in its intriguing raggedness, which is embedded in the social upheaval in the immediate aftermath of the Civil War” (Mancuso, Walt Whitman: An Encyclopedia).