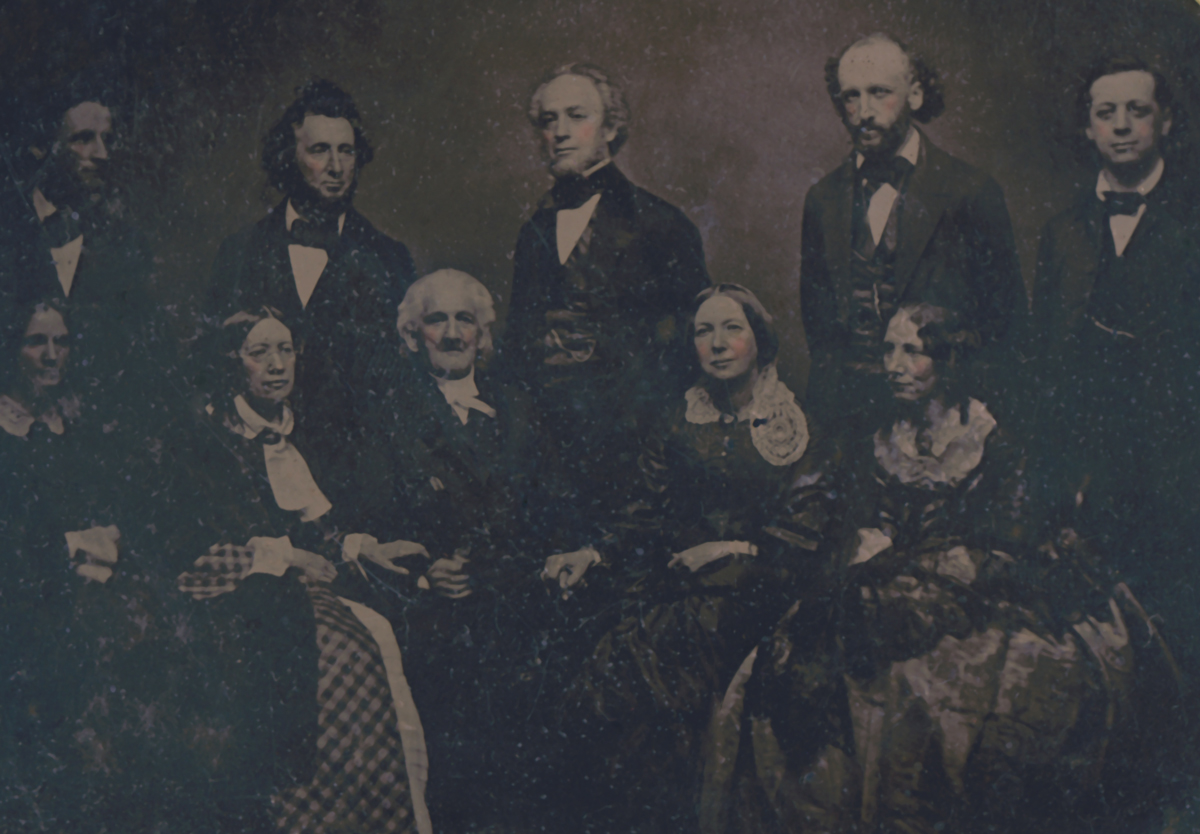 This splendid and rare Mathew Brady Studio group portrait depicts ten members of the celebrated Beecher family. In this family portrait, Lyman Beecher is seated at center, flanked by his four daughters (Harriet, Catharine, Mary, and Isabella). Behind them stand the five of the seven brothers (William, Edward, Henry Ward, Charles, and Thomas—George had died in 1843 and James was a missionary in China). The Beechers were one of America’s most famous families. Patriarch Lyman Beecher, famed clergyman, abolitionist, and social reformer, was a central figure of the Second Great Awakening. Harriet is most famous as the author of Uncle Tom’s Cabin. Rev. Henry Ward Beecher, one of the best-known men of his day, was an evangelist, abolitionist, advocate of women’s suffrage, proponent of evolution, and social reformer. Catharine Beecher was one of the leading advocates of female education. Charles Beecher was a distinguished clergyman, author, and composer of hymns, and his brother Thomas K. Beecher, also a minister, is best remembered as a close friend of Samuel Clemens. Isabella Beecher was a major figure in the women’s suffrage movement. This ambrotype precedes the other famous Brady photograph of the Beechers, the 1861 portrait of Harriet, Lyman, and Henry (albumen print, National Portrait Gallery). The case is stamped George M. Howe, listed as a Daguerreian at 112 Middle Street, Portland, Maine from 1853 to 1860. The use of a case from a gallery in Maine may be explained by Harriet’s move to Brunswick, Maine in 1850 when her husband Calvin Ellis Stowe secured a teaching position at Bowdoin. A later albumen print at the Harriet Beecher Stowe Center in Hartford bears the Brady stamp.

Clergyman, educator, and social reformer, Lyman Beecher embodied the shift from the harsh, demanding Puritan faith of the Second Great Awakening to a religion that found its expression in larger society. A leading figure in Calvinist churches in New York, Connecticut, and Massachusetts, Beecher played a key role in founding Yale Divinity School. In 1833, Beecher and his family moved west to Cincinnati, where he became president of the Lane Theological Seminary, a training ground for the religious leaders of the abolition movement. “Magnetic in personality, incisive and powerful in manner of expression, Beecher was in his prime one of the most eloquent of American pulpit orators” (NNDB). Exhibited: National Portrait Gallery, Smithsonian Institution, Fogg Art Museum (Harvard University), and International Center of Photography. Reference: featured in “A Gallery of Images,” Mary Panzer, Mathew Brady and the Image of History (Smithsonian, 1997).

Signed by Harriet Beecher Stowe. Daughter of Lyman Beecher, Harriet Beecher Stowe is most famous for her novel Uncle Tom’s Cabin, serialized in 1851-2 and published in book form in 1852. The poignant novel of a runaway slave became a bestseller, selling 300,000 copies within one year. The book was translated into dozens of languages, and stage adaptations quickly followed. Uncle Tom and Simon Legree remain part of our everyday language. When Stowe visited Lincoln at the White House in 1862, the President was famously said to have exclaimed, “So you’re the little woman who wrote the book that started this great war.” With the publication of Uncle Tom’s Cabin, Stowe became one of America’s most famous authors. She wrote more than twenty books, including novels, travelogues, memoirs, and collections of articles and letters. Like her siblings, she was a tireless social reformer who worked for women’s suffrage, temperance, and abolition.

The contemporary pencil inscription on the verso reads: “Mrs. Henry Ward Beecher, taken from a miniature when she was 18 years old.” Henry Ward Beecher’s wife, Eunice White Beecher (1812-1897) wrote a number of books about domestic life. Her own domestic life was complicated, as Henry was famous for his extra- marital affairs, despite his pulpit denunciations of “free love.” In 1870 his affair with a friend’s wife was revealed, leading to a series of public scandals and trials that divided the Beecher family.