HOME  >  Browse  >  Rare Books  >  Landmark Books  >  Narrative of the Surveying Voyages of His Majesty’s Ships Adventure and Beagle, between the years 1826 and 1836 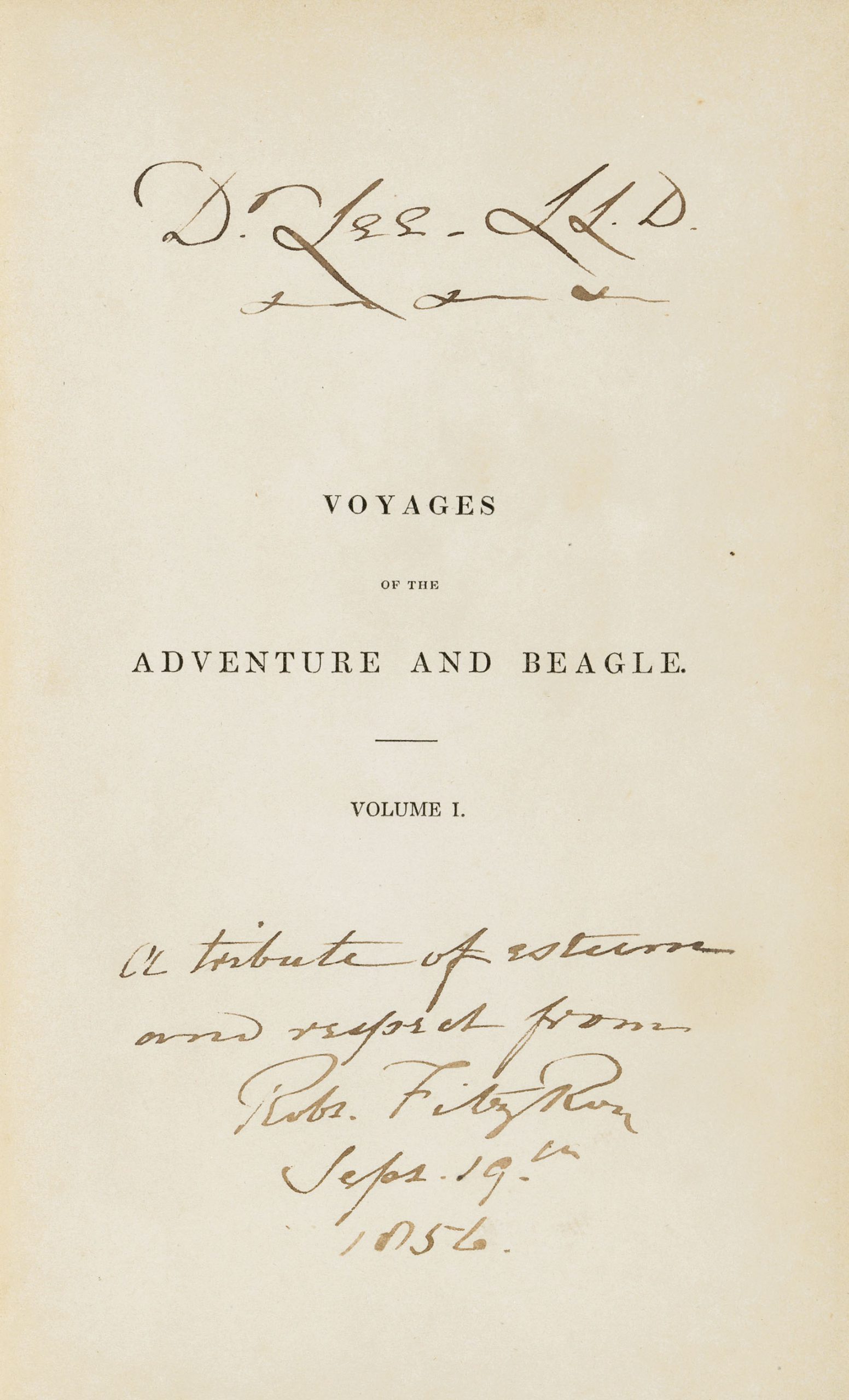 the voyage of H.M.S. Beagle - an important presentation copy

DARWIN, CHARLES, Philip Parker King, and Robert FitzRoy. Narrative of the Surveying Voyages of His Majesty’s Ships Adventure and Beagle, between the years 1826 and 1836

Large 8vo. 56 plates, maps, and charts (a few splits at folds). Three volumes in four (including the appendix to vol. 2). Complete with all plates and maps, some loose in pockets as issued. Original blue dark cloth. Some fading, restoration to cloth. Half morocco cases.

This is the first edition of Darwin’s account of the voyage of H.M.S. Beagle, “one of the most interesting records of natural history exploration ever written and one of the most important, for it was on this voyage that Darwin prepared for his lifework, ultimately leading to The Origin of Species” (Hill). The Beagle crew consisted of sixty-five officers and men and nine “supernumeraries,” including, as FitzRoy wrote, “Mr. Charles Darwin … a young man of promising ability, extremely fond of geology, and indeed all branches of natural history” (Voyages of the Adventure and the Beagle, vol. II, pp. 19-20).

The voyage of the Beagle was “the most important event in Darwin’s intellectual life and in the history of biological science. Darwin sailed with no formal scientific training. He returned a hard-headed man of science, knowing the importance of evidence, almost convinced that species had not always been as they were since creation but had undergone change. … The experiences of his five years … and what they led to, built up into a process of epoch-making importance in the history of thought” (DSB).

This landmark publication in the history of exploration and science comprises Darwin’s celebrated Journal and Remarks 1832-36 (vol. III), the account of the 1826-30 expedition of the Adventure under Philip Parker King, accompanied by the Beagle under Stokes and then FitzRoy (vol. I), and FitzRoy’s account of his continuation and completion of the survey in the Beagle alone, ending in 1836 (vol. II and its supplement). “The surveys he carried out in South American waters established FitzRoy as a first-rate hydrographer and won him the gold medal of the Royal Geographical Society in 1837” (DSB).

FitzRoy’s presentation of this set to Lee commemorates their long association as pioneers of meteorology. Lee founded the British Meteorological Society in 1839, and FitzRoy was instrumental in the founding of the Meteorological Office of the Board of Trade, serving as its first head. FitzRoy, who coined the term “weather forecast,” issued the first daily weather forecasts, published in The Times. FitzRoy pioneered the gathering of meteorological observations from fellow ship captains in an effort to predict weather patterns and warn of approaching weather changes.

VERY RARE. Only one other complete set of the Narrative of the Surveying Voyages inscribed by FitzRoy has appeared at auction in the past fifty years.