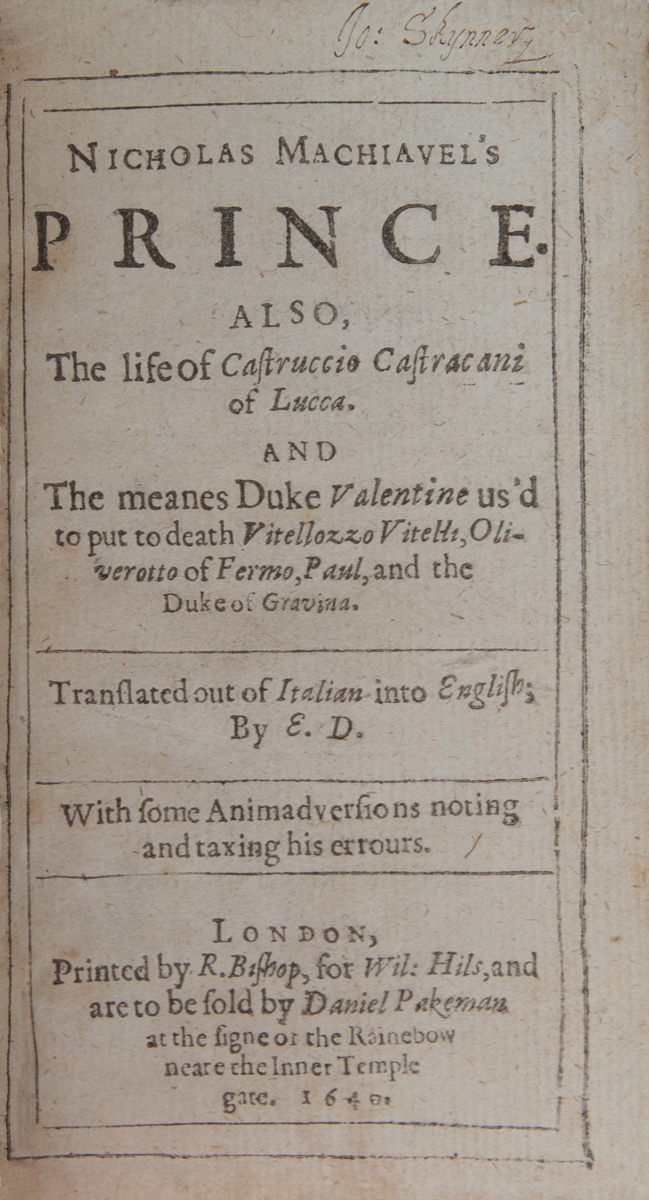 First edition in English of one of the great books of the Renaissance and a classic of political philosophy.

Machiavelli, long a diplomat for the Florentine Republic, was personally acquainted with many of the great leaders of the Renaissance including Lorenzo de Medici (the dedicatee of Il Principe), Louis XII of France, Emperor Maximilian, Catherine Sforza, and Piero Soderini. In 1502 he was sent as the Florentine envoy to the court of Cesare Borgia, duke of Valentinois. In Borgia he found an audacious and strong willed leader capable of deception and violence to achieve his ends, yet a man who appeared at all times both controlled and diplomatically prudent. Borgia provided the model for Machiavelli’s ideal prince, Valentino. His book addressed the problem of the unification of a self-reliant Italy.

“It was Machiavelli’s intense preoccupation with this problem– what a state is and how to found one in existing circumstances– which caused the many riddles of his speculative writings … He was by no means indifferent to private virtue … but in the realm of politics he postponed morals to political expediency” (Britannica 11th ed.).

“The Prince is far more than a book of directions to any one of the many Italian princelings. … Machiavelli founded the science of modern politics on the study of mankind. … Politics was a science to be divorced entirely from ethics, and nothing must stand in the way of its machinery. Many of the remedies he proposed for the rescue of Italy were eventually applied. His concept of the qualities demanded from a ruler and the absolute need of a national militia came to fruition in the monarchies of the seventeenth century and their national armies” (Printing and the Mind of Man 63).

Machiavelli is universally regarded as one of the great thinkers in political philosophy. At the same time, Machiavelli’s name has entered everyday usage, connoting sinister machinations and the dark side of politics and power. His name was a familiar part of the English language even in Shakespeare’s time, for Hamlet says “I’ll put the murderous Machiavel to school.” Macaulay wrote, “Out of his [Niccolo Machiavelli’s] surname they have coined an epithet for a knave, and out of his Christian name a synonym for the devil.”