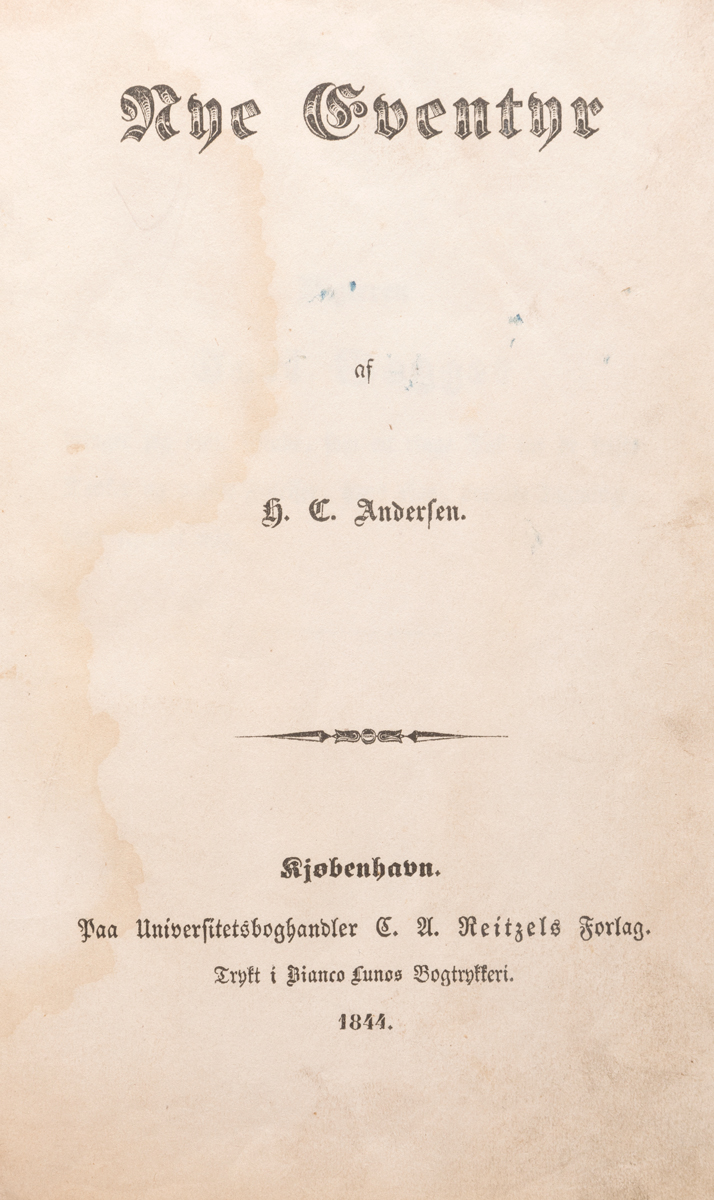 Two parts in one volume. Half-title and contents leaf preserved by the binder in the first part, not in second, as customary. Contemporary half calf, spine gilt, green marbled boards. Spine worn, without free endpapers; some staining and soiling to title and several other leaves. A good, sound copy, entirely unrestored. Half morocco case.

FIRST EDITION, FIRST ISSUE (i.e. title dated 1844 and without indication of later parts or a general title page). A landmark of world literature, this collection contains the first printings of the works that brought Andersen international fame, including “The Ugly Duckling” and “The Snow Queen.”  For this series of Nye Eventyr (New Fairy Tales), the author indicated his seriousness of purpose by dropping his sub-title “Fortalte for Børn” (Told for Children) used in his previous collection—these were to be tales for all.

Andersen’s breakthrough work, Nye Eventyr was published to universal acclaim. “It was not until 1843/4 that the appearance of “The Ugly Duckling” swept them [Andersen’s fairy tales] into general favour” (Printing and the Mind of Man 299). “All four stories [in the first part] are original and owe no debt to folk tale or myth . . . These were the most mature and perfectly constructed tales he had written, and though some of them at once became and have remained favourites of children, Andersen here melds the childlike and the profound with exceptional artistry” (Wullschlager, Hans Christian Andersen, p. 231).

The 850 copies of the first part were published on November 10, 1843, with the customary holiday post-dating of the title-page to 1844. The first installment contains “The Ugly Duckling,” “The Nightingale,” “The Top and the Ball,” and “The Angel.”  The second installment (December 1844, dated 1845) contains “The Snow Queen” and “The Fir Tree.”  A third installment appeared in April 1845.

Andersen’s legacy as a creator of fairy tales is unparalleled. Before him, the Grimms in Germany and Perrault in France had collected folk tales from traditional oral sources, but “Andersen was the first writer to treat this peasant form as a literary genre and to invent new tales which entered the collective consciousness with the same mythic power as the ancient, anonymous ones” (Wullschlager, p. 3).

The first issue is rare. Most of the surviving copies were bound up with the later parts and a general title page. This volume reflects the book in its original form, before Andersen achieved the fame that led him to publish the later series of tales typically found bound up as collections.