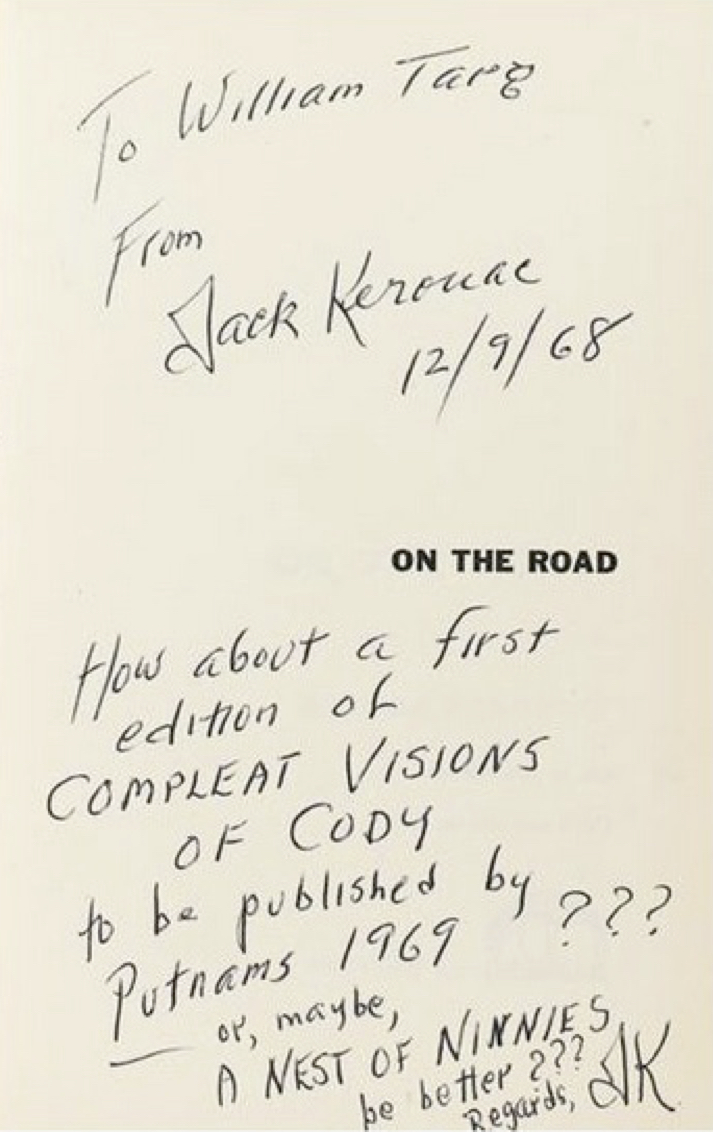 On the Road with a superb Kerouac inscription

KEROUAC, JACK. On the Road

FIRST EDITION, with a superb, long inscription from Kerouac to William Targ, noted bookman, editor, and publisher: “To William Targ From Jack Kerouac 12/9/68. How about a first edition of Compleat Visions of Cody to be published by Putnams 1969??? — or, maybe A Nest of Ninnies be better??? Regards, JK.”

Kerouac inscribed this first edition to Wiliam Targ in 1968, the year he bought Mario Puzo’s The Godfather sight unseen for Putnam’s. Targ helped to make the novel a phenomenal bestseller. At this point in his life Kerouac was living with his mother in St. Petersburg, Florida. He was drinking heavily, was seriously in debt, was hardly writing, and his books were not selling. This inscription suggests that  Kerouac is hinting that Targ should take him on and publish him at Putnam’s. Kerouac died the following October.

Based on several cross-country journeys made by Kerouac and Neal Cassady between 1947-1950, “On the Road has become a classic of the Beat Movement with its stream-of-consciousness depiction of the rejection of mainstream American values set in a physical and metaphysical journey across America” (The Book in America, 136).

The text was set in type from Kerouac’s 120-foot long scroll, made up of sheets of paper taped together end to end and fed continuously into a typewriter, onto which Kerouac typed his narrative in one paragraph with no punctuation. The novel was composed in three weeks in what Kerouac termed “spontaneous prose,” based on impressionistic narrative sketches incorporating the rhythms of bebop. “Considered by many his masterwork, it represents without question his fullest exploration in spontaneous prose” (ANB).

“[Kerouac’s] extraordinary attention to detail, astonishing memory, and encyclopedic grasp of European and American literature, popular culture, and world religions enabled him to create densely textured narratives that, when read aloud as they were meant to be, achieved an incantatory dimension rarely experienced in modern literature” (ANB).

On the book’s publication, the New York Times hailed On the Road as “the most beautifully executed, the clearest and the most important utterance yet made by the generation Kerouac himself named years ago as ‘beat,’ and whose principal avatar he is.” “Today—still in print and possessed of a cult following—it is recognized as a literary classic that bears comparison to the works of Walt Whitman, Mark Twain, and William Faulkner” (NYPL).