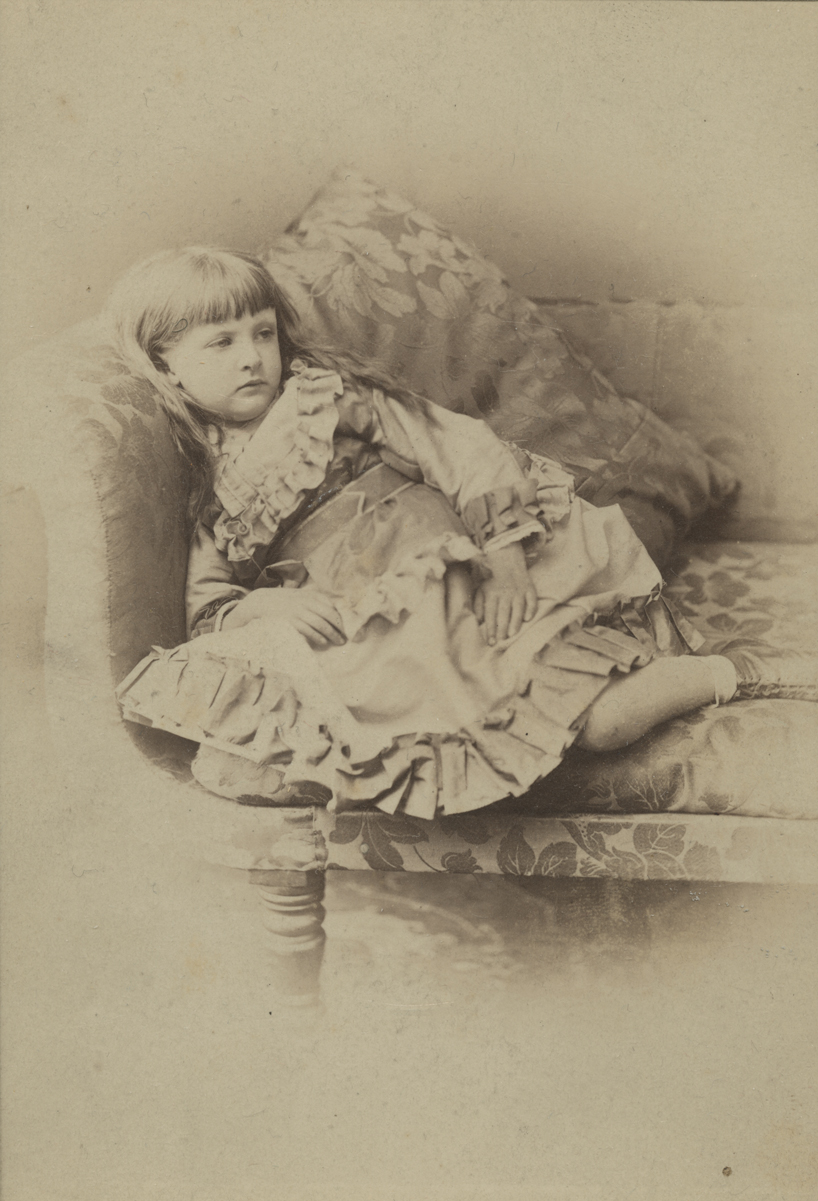 “His most frequent and favourite sitter was Alexandra Kitchin, better known by her pet name of ‘Xie.’” — Taylor

Dodgson, better known as Lewis Carroll, who took up photography in 1856, was one of the most accomplished Victorian amateur photographers. He is most famous for his portraits of girls. On seeing one of his child portraits, Tennyson agreed to sit for him, saying, “You, I suppose, dream photographs.”

Beginning in 1856 Dodgson took about three thousand negatives, mostly portraits, over the span of about twenty-five years. He mastered the difficult techniques of the collodion process and devoted himself to art and composition, achieving results equaling those of the best professionals of his day. “The apparently contradictory aspects of his personality, artistic and imaginative on the one hand, and pedantically careful on the other, became the mainspring of his creative output, both as Charles Dodgson, the photographer, and as Lewis Carroll, children’s author” (Taylor, in Encyclopedia of Nineteenth-Century Photography).

Xie (pronounced “Ecksy,” for Alexandra) was one of the most notable of Dodgson’s photographic subjects. She is now thought to have been six when this photograph was taken. Xie posed for Dodgson from age four until she turned sixteen. “Another of Lewis Carroll’s early favourites, was Miss Alexandra (Xie) Kitchin, daughter of the Dean of Durham. Her father was for fifteen years Censor of the unattached members of the University of Oxford, so that Dodgson had plenty of opportunities of photographing his little friend” (Life and Letters of Lewis Carroll). “His most frequent and favourite sitter was Alexandra Kitchin, better known by her pet name of ‘Xie.’ Over the years he photographed her more often and in a wider variety of costumes and settings than any other person” (Taylor).

“With the exception of four pictures displayed at the 1858 annual exhibition of the Photographic Society of London, Dodgson had never exhibited his pictures, which were only known to a narrow circle of friends and acquaintances” (Fringier, “Out of Focus: A Portrait of Charles Lutwidge Dodgson” in Strange Sisters: Literature and Aesthetics in the Nineteenth Century).

This is a splendid, representative example of Dodgson’s portraits of children, from the collection of his close friend Henry Holiday (see Provenance).

Provenance: Henry Holiday, with his monogram on verso. Holiday, who illustrated The Hunting of the Snark, was a close friend of Dodgson. An album of Dodgson photographs belonging to Holiday is now at Princeton.