HOME  >  Browse  >  Rare Books  >  Landmark Books  >  Photographs Showing Landscapes, Geological and other Features, of Portions of the Western Territory of the United States, obtained in connection with geographical and geological explorations and surveys west of the 100th meridian (seasons of 1871, 1872 and 1873). 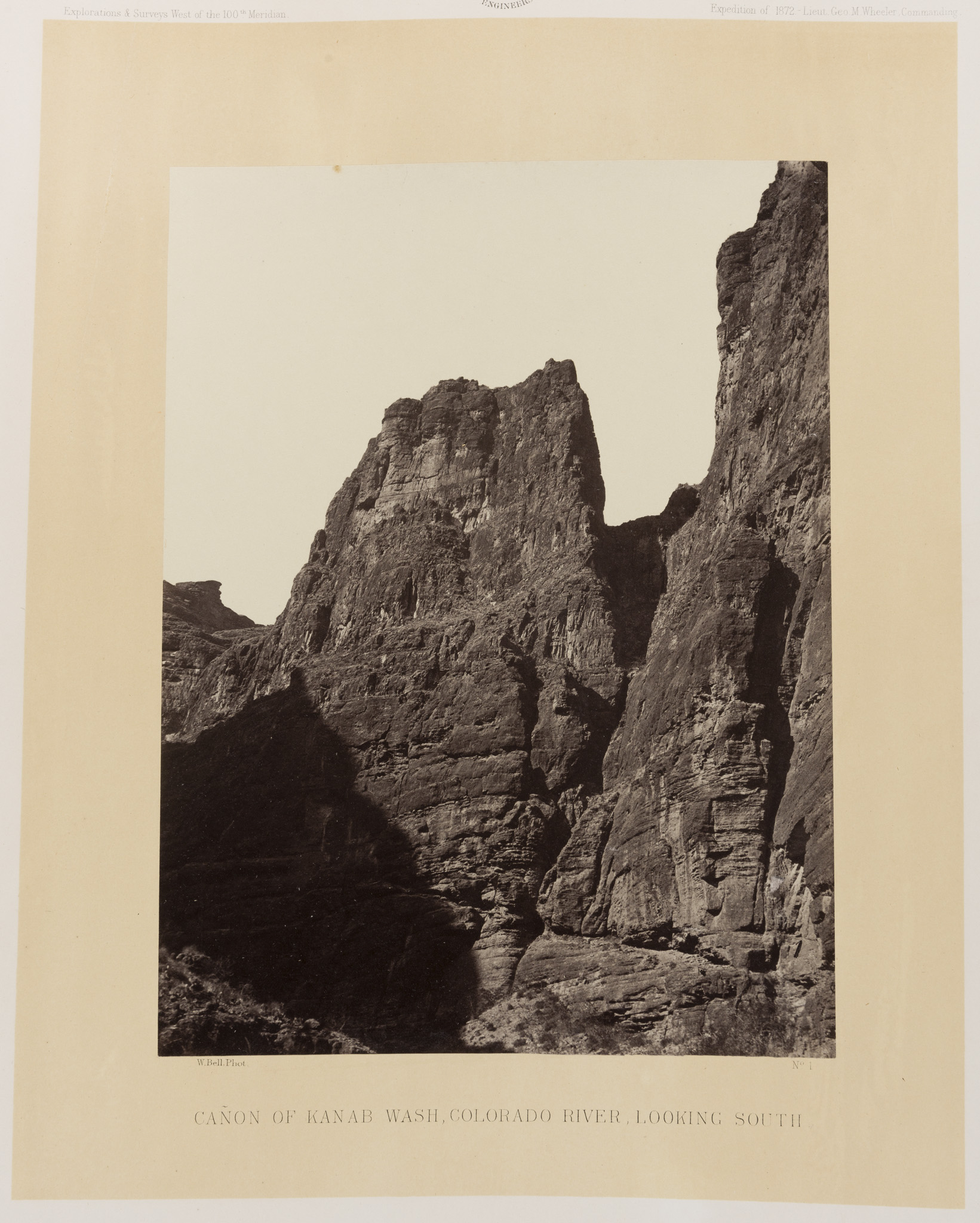 a monument of photography of the American West

O’SULLIVAN, TIMOTHY and WILLIAM BELL.. Photographs Showing Landscapes, Geological and other Features, of Portions of the Western Territory of the United States, obtained in connection with geographical and geological explorations and surveys west of the 100th meridian (seasons of 1871, 1872 and 1873).

50 albumen prints (approx.. 8 x 10 ¾ in.), Ancient Ruins in the Cañon de Chelle, N. M. loose. The photographs, 35 by Timothy O’Sullivan and 15 by William Bell, many numbered in the negative, are on the two-toned Wheeler Survey mounts, giving the photographer’s credit, title, plate number, and survey information. Large folio (21 ½ x 16 ½ in.). Original red-brown half morocco. The prints occasionally show a little fading but generally are in outstanding condition, and the binding and mounts are in excellent condition as well. Provenance: Library of Congress, bookplate  on front pastedown, small oval stamp on verso of title, de-accessioned.

This rare collection of 50 photographs is a monument of photography of the American West. Lt. George Wheeler’s expedition of 1871-74 was an ambitious survey of the vast region west of the 100th meridian, including Colorado, New Mexico, Arizona, and Idaho. The official photographer was Timothy O’Sullivan, who had trained under Mathew Brady and Alexander Gardner.

O’Sullivan established himself as one of the foremost American photographers during the Civil War and on the King survey before joining the Wheeler survey in 1871. British-born William Bell served as a substitute during O’Sullivan’s months assigned to the King survey in 1872. O’Sullivan rejoined the Wheeler survey in 1873 and 1874. Over the four-year project O’Sullivan and Bell created some of the best and most dramatic photographs of the American West ever made. Some of the most spectacular photographs resulted from the 200- mile journey up the Colorado River.

“As O’Sullivan’s experience in the field was unequaled from his work as a photographer during the Civil War, it is not surprising that Wheeler placed great confidence in him from the outset, providing him with a roving commission and a boat of his own on the Colorado River. Although Wheeler’s boats progressed slowly (they had to be rowed, sailed, and hauled upriver against the current), O’Sullivan’s was tardier still. Exploring the astonishing photographic possibilities of the canyons from his boat, ‘Picture,’ he meandered, tacked, and stopped as he studied how to turn to advantage the sun and shade, the sheer cliffs, and their reflection in the water and profile against the sky. Individually, the Black Canyon photographs have exquisite resolution. In sequence, they constitute the pictorial voyage of a reflective, visionary artist who knew how to orchestrate his experience of place. As one turns the pages of the album, the shifting perspectives of river and cliff move in stately progression as, effectively as a diorama, they carry the viewer deep into the very heart of the canyon, where, Wheeler wrote, ‘a stillness like death creates impressions of awe’” (Metropolitan Museum of Art).

“In 1873 O’Sullivan led an independent expedition for Wheeler, visiting the Zuni and Magia pueblos and the Canyon de Chelly, with its remnants of a cliff-dwelling culture. O’Sullivan’s 1873 images of Apache scouts are among the few unromanticized pictures of the western Indian, unlike those of many ethnographic photographers who posed Indians in the studio or outdoors against neutral backgrounds” (Merry A. Foresta, American Photographs: The First Century, National Museum of American Art, 1996).

“It is the individual nature of O’Sullivan’s production that makes him of such artistic importance today. Indeed, of all the photographers who worked on the great western surveys of this era, O’Sullivan remains the most admired, studied, and debated. It is to him, more than any of his peers, that contemporary photographers and historians first turn for inspiration and intellectual challenge” (Keith Davis, Timothy H. O’Sullivan: The King Survey Photographs, 9).

Only 50 albums with 50 photographs each were produced between 1874 and 1875. Each contained 35 views by O’Sullivan and 15 images by Bell. Smaller albums with only 25 photographs were also produced in a larger edition and with different plate sequencing. According to Robin Kelsey, Wheeler sent bound albums, most with 25 and some with 50 photographs, to nearly 30 government officials between 1875 and 1878. Recipients included President Rutherford B. Hayes, the Secretary of the Interior, and the Library of Congress.

Photograph albums from the Wheeler Survey are very rare. No other complete set of 50 photographs has appeared for public sale in decades. This is a splendid example.