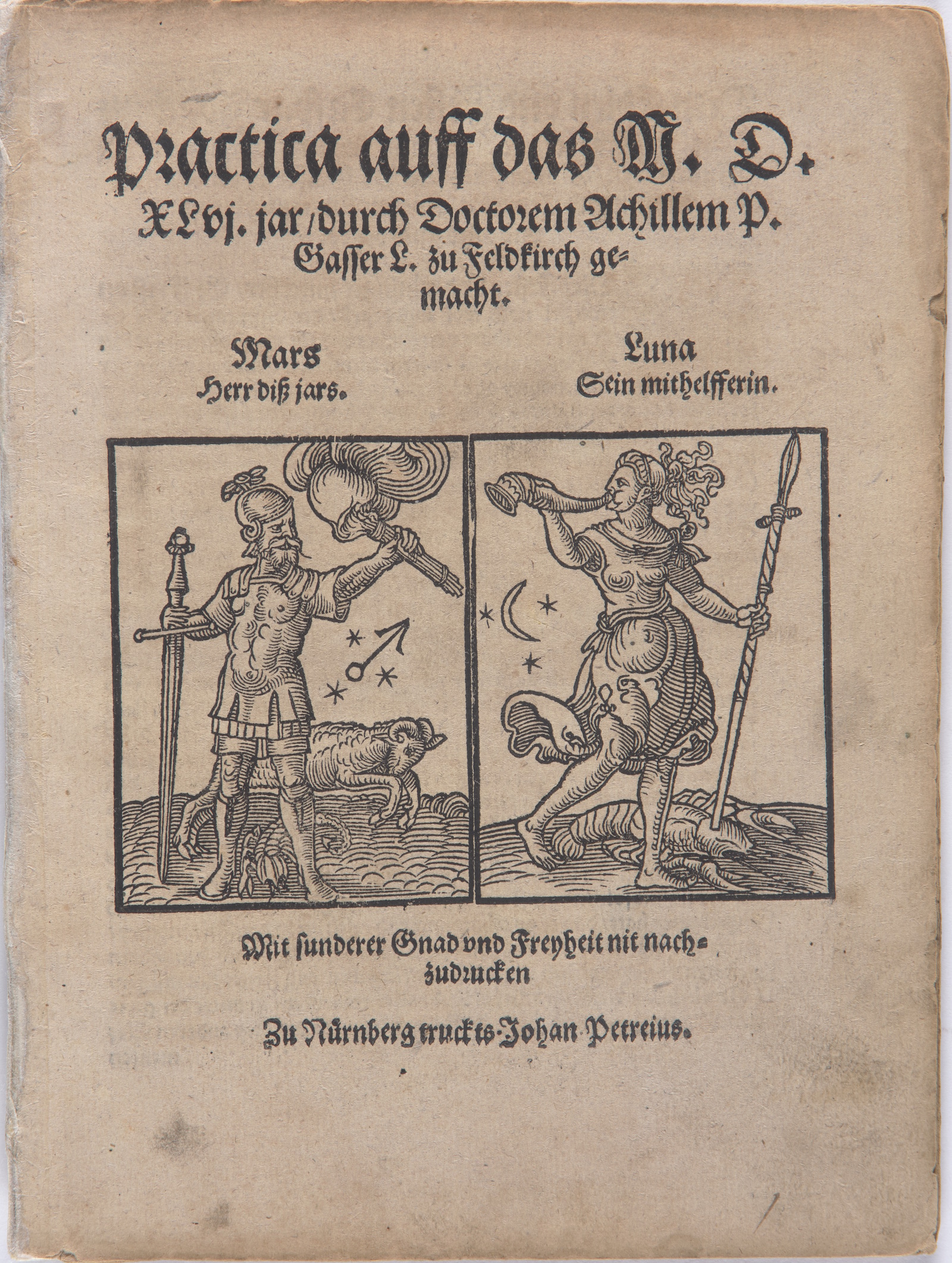 the only known copy of a landmark work of Copernicanism, printed by the printer of De Revolutionibus

First edition of the only known copy of a landmark work of Copernicanism. Gasser’s Practica contains the first account of Copernican heliocentrism printed in a vernacular language. It is “as concise and accessible a summary of heliocentrism as one could wish for” (Danielson). This “enthusiastic hymn of praise to Copernicus” (Burmeister) was printed by the printer of De Revolutionibus.

Achilles Gasser was a central figure in the promotion and dissemination of heliocentrism. He was a patron of Copernicus’s student and advocate Georg Rheticus, who oversaw the 1543 publication of Copernicus’s De Revolutionibus. Johannes Petreius, the publisher, inscribed a copy of De Revolutionibus to Gasser in September 1543. By the early summer of 1545, Gasser was finalizing his almanac, the Practica. This otherwise unknown work, the first Copernican almanac, was a prediction pamphlet for the coming year of 1546. Both works were printed by Johannes Petreius in Nuremberg.

Rheticus visited Gasser that summer and, according to Danielson, the men discussed the precarious reception of Copernicus’s book and the need to support it with further mathematical proof. When Gasser returned to his Practica, he wrote prefatory material for two editions. The preface to the Latin edition (today known in several copies) is addressed to Rheticus. It urges the younger scholar to find proofs of heliocentrism in order to convince a doubting world. The preface to the unique German edition (known only through the present example) is Gasser’s letter to his dedicatee promoting heliocentrism as fact, not theory.

In the dedicatory letter to Caspar Joachim Täntzl, a Tyrolean nobleman, amateur scientist, and mine owner, Gasser makes extended reference to Copernicus. He observes that for nearly 2000 years astronomers have “found the movement of the stars and planets rather incongruous and imperfect according to their instruments and calculations, indeed even according to their daily experience. For this reason, one after the other they always kept on hoping to adjust, improve, and remedy this situation by means of clever contrivances and ingenious speculations.”

At last “in our own day,” Gasser notes, “the most learned and wonderful man Dr. Nicolaus Copernicus, away off in Prussia, has taken up the task with such seriousness, diligence, and steadfastness, that for the establishment and restoration of astronomy he has had to lay an utter and completely new foundation, unheard of before … (namely, that the Sun is a light for all creation and stands unmoved in the midst of the whole universe; that his earthly realm together with the other three elements and the circuit of the Moon variously courses round between the planets Venus and Mars; and also that the heavens beyond Saturn, in which are seen the fixed stars, all together stand fast and unmoved, with no other spheres encompassing them, etc.) and thus has not only demonstratively proven his theory among the mathematicians, and with great pains, restored the portrait of Astronomy, but has also immediately been regarded as having perpetrated a heresy, and indeed – by many others incapable of understanding his matter – is already being condemned.”

This German edition, with its dramatic dedicatory epistle, is otherwise unknown. Several printed copies of the Latin edition (Prognosticum astrologicum ad annum Domini MDDXLVI) exist in German institutions, with none in America. An English edition without any Copernican material (A prognostication for this yere MDXLVI) is known in a single copy at the Bodleian.