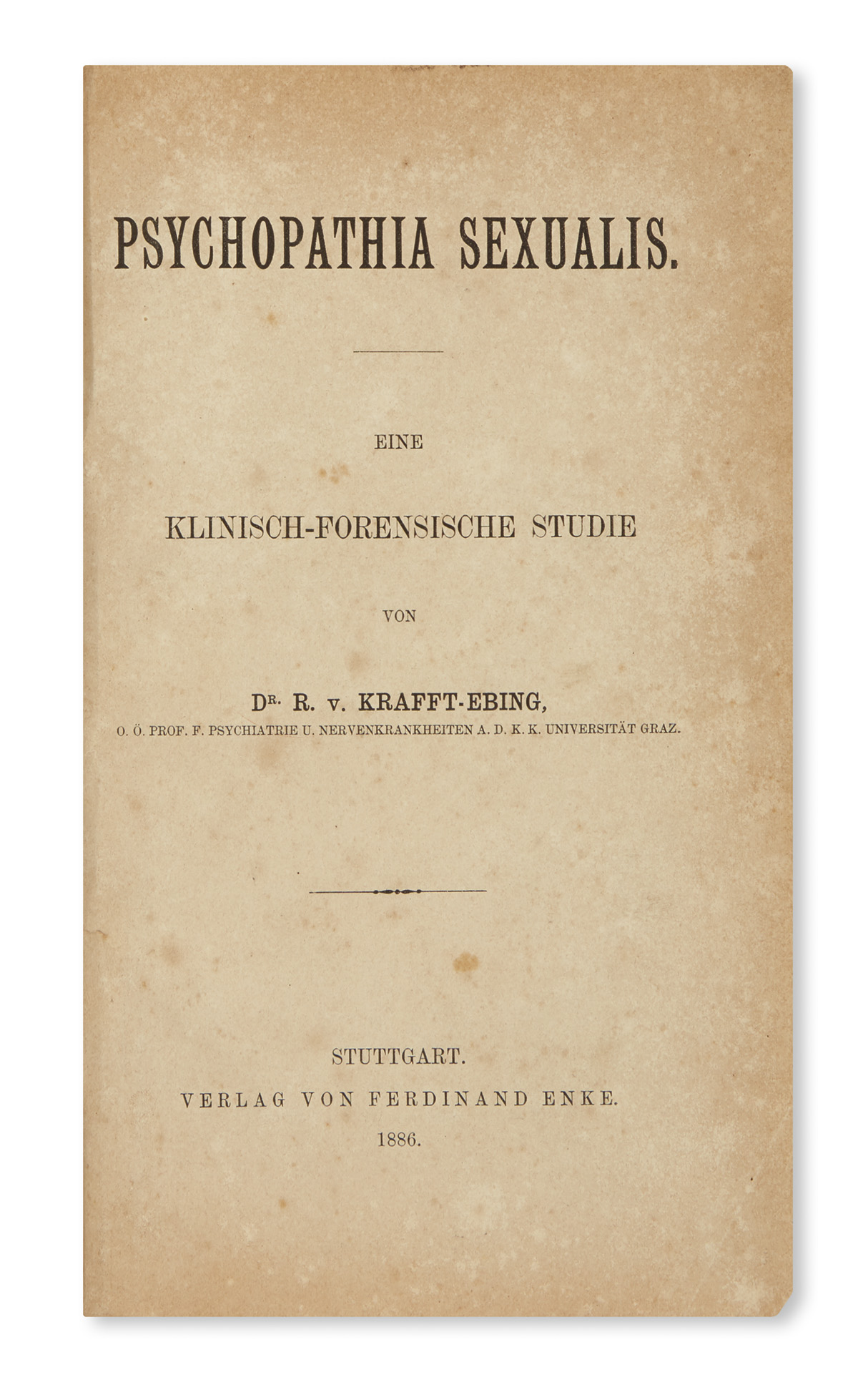 the founding father of sexology

FIRST EDITION of the founding work of sexology. “Austrian psychiatrist Richard von Krafft-Ebing is primarily known as the founding father of sexology. His Psychopathia Sexualis is widely accepted to be the foundational work for the scientific study of human sexuality, a field still in its infancy at the end of the nineteenth century. Psychopathia Sexualis offers an overview of both sexological physiology and psychology and is of groundbreaking importance for the origin of the modern scientific research domain of sexological pathology as an autonomous discipline. Krafft-Ebing’s ‘bible of psychopathology’ evolved from a collection of forty-five clinical vignettes in its first edition (1886) into an extensive collection of two-hundred thirty-eight case histories in its final, posthumously published edition (1903)” (Jens De Vleminck, “Sadism and masochism on the Procrustean bed of hysteria: from Psychopathia Sexualis to Three Essays on the Theory of Sexuality,” Psychoanalysis and History (2017)).

“Sexual perversions–sadism, masochism, fetishism, homosexuality, and countless other ‘aberrations’ –did not exist before Krafft-Ebing’s Psychopathia Sexualis. Of course, sexual perversions did exist in various forms and guises–since the beginning of civilization, no doubt–they were not comprehensively defined and classified as such until the 1886 publication of but Psychopathia Sexualis in Stuttgart, Germany. It marked the birth of Sexualwissenschaft, or ‘sexology’–the applied science and study of sexual behavior–and set the social and political standard of what we still consider to this day to be sexually ‘normal.’

“The keepers of sexual normalcy produced their own bible; a guidebook that exhibited, in clear clinical detail, a multitude of sexual perversions, individually identified and succinctly explained. Psychopathia Sexualis satiated the scientists with its plethora of detail, and Krafft-Ebing was the principal architect in the forensic and psychiatric demarcation between ‘normal’ and ‘abnormal’ sexuality” (King, introduction to Psychopathia Sexualis, 1999 edition).

Psychopathia Sexualis has played a decisive role in shaping modern views on sexuality, from fin-de-siècle Vienna and the writings of Sigmund Freud down to the present.

RARE. The first edition is rare. After a small, apparently academic initial print run, Psychopathia Sexualis became wildly successful, going through twelve ever-larger editions (four within the first year of publication alone) and reaching a market far beyond the medical community the author intended. We have not encountered another example in the market, and we cannot trace another example appearing at auction.