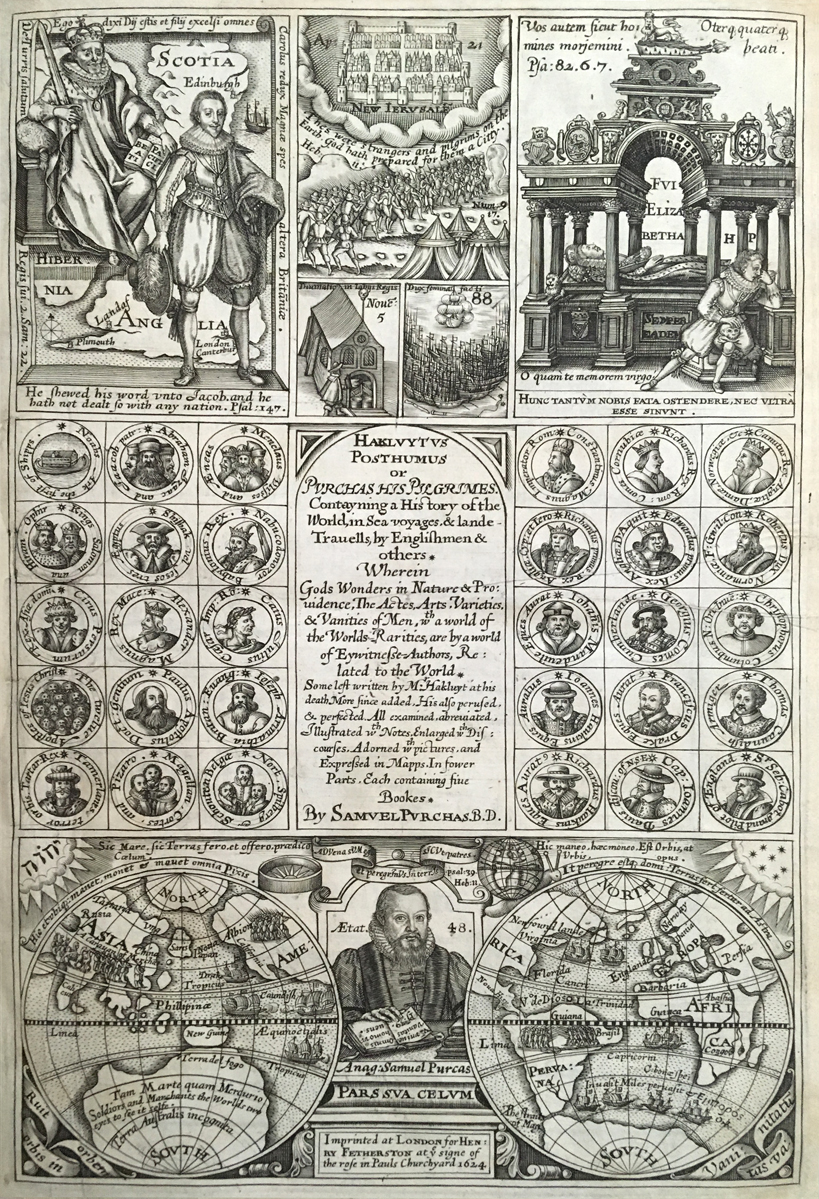 FIRST EDITION of this celebrated collection of travels accounts in English, “one of the fullest and most important collections  of early voyages and travels in the English language” (Church). This is the rare first issue of volume I with the engraved title page dated 1624 (usually it is dated 1625) and with the offending passages concerning the Dutch (easily recognized by the presence of the p. 704 headline ‘Hollanders lying devices, to disgrace the English,” which was then changed to ‘Amboyna taken by the Dutch. Ingratitude. Boasting’).

This extraordinary undertaking, which extended Hakluyt’s Principal Navigations (London, 1598), contains accounts of more than 1200 voyages of discovery and exploration. Many of these accounts were previously unpublished in any language; scores of others are here published for the first time in English. The set includes many of the accounts of the courageous men who had recently explored and begun to settle the New World. Among the hundreds of voyages related are those of Columbus, Da Gama, Cortés, Pizarro,  Magellan, and Cabot. English explorations including those of Drake and Hawkins, the Jesuit explorations of China and Japan, the Portuguese voyages to the East Indies, and the explorations of the East India Company. The exploration of the New World is one of the focal points of this set, the greatest English work on exploration of the seventeenth century. Part of volume three and all of volume four are devoted to voyages to America.

A CLASSIC OF EXPLORATION LITERATURE. The Age of Exploration contains some of the most exciting and dramatic tales of human achievement and adventure. The compilations of Ramusio and Hakluyt in the sixteenth century, and Purchas in the seventeenth century, form the foundation of a collection of great exploration books.

LANDMARK MAPS. “The six original maps which Purchas uses are all of prime importance” (Wallis). The Pilgrimes contains several important maps of America including:

John Smith’s Map of Virginia, which Smith made available to his friend Samuel Purchas. This is “one of the most important printed maps of America ever produced and certainly one of the greatest influence. … [It] inspired much interest in the fledgling Virginia colony, influencing considerably its eventual success” (Burden). This is the first printed map of the whole extent of the Chesapeake Bay based upon personal experience.  The present example is in state 8, one of three states associated with the Purchas publication. Smith’s map is “the most important map to appear in print during the period of early settlement and the one map of Virginia that has had the greatest influence upon map making for the longest period of time” (Coolie Verner, “The First Maps of Virginia, 1590-1673”).

William Alexander’s map of the Northeast, showing the coast from Massachusetts to Newfoundland. This is the first map to record many place names and is a “map of great importance” (Burden).

Roe’s map of Northern India, the earliest English map of Mogul territories, was the standard map of the reion for nearly a century.

Saris’s map of China correctly shows Korea as a peninsula and may be the earliest map of China from Chinese sources to have be published in Europe, according to Skelton.

WITH PURCHASE HIS PILGRIMAGE. The set includes Purchas his Pilgrimage, an account of world religions with travel accounts, here present in the fourth and best edition as issued with the first editions of the Pilgrimes. As usual, this is the second issue with the dedication to King Charles. “The fifth volume of this set of the Pilgrimes is in reality the fourth and best edition of the Pilgrimage” (Hill, Collection of Pacific Voyages, 244). Coleridge was inspired to compose “Kubla Khan” in a dream after falling asleep while reading its section containing the lines “In Xaindu did Cublai Can build a stately pallace …”

RARE IN A CONTEMPORARY BINDING. Although rebound copies appear in the market, sets in contemporary bindings are rarely encountered. The last example of the first issue in a contemporary binding to sell at auction was the Frank Streeter copy in goatskin, which made $576,000 in 2007.

PROVENANCE: from the library of the Scottish patriot Andrew Fletcher of Saltoun, (1655-1716). Heir and son of Sir Robert Fletcher, Andrew received an extraordinary education. After his father’s death he was tutored by Bishop Gilbert Burnet, later author of the History of His Own Time. Their relationship continued for years and Andrew met many of the great Scottish intellectuals of his time. Fletcher became an important intellectual known for his “fine taste in all manner of polite learning, his curious library” and as “a cultivator of philosophy and science” (DNB). Fletcher was “one of the most accomplished Scotchmen of his time … [his] ardent, courageous, and disinterested patriotism raise him far above the Scotch politicians of his time … As a writer he is superior to any Scotchman of his age, and his oratory, nervous and incisive, is made eloquent by his sincerity and earnestness” (DNB). The culmination of Fletcher’s years as a statesman was the passage of the Act of Union, merging the two crowns.