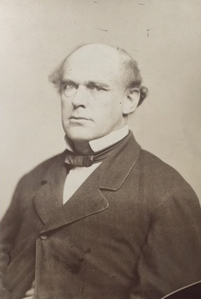 Brady portrait of Salmon P. Chase, who oversaw a revolution in American finance

LINCOLN’S TREASURY SECRETARY. After serving in the United States Senate and as governor of Ohio, Salmon P. Chase unsuccessfully sought the Republican nomination in the 1860 presidential campaign. Abraham Lincoln named Chase to be secretary of the treasury. Chase brought about the revolution in the nation’s finances required by the Civil War. These measures included the establishment of a national banking system, loans financed by government bonds, and legal tender notes called “greenbacks.” In 1864 Chase left Lincoln’s cabinet, and six months later he was named chief justice of the United States, a position Chase had long coveted.

This portrait of Chase is evidently one of the “published” Imperial portraits issued by Brady. “These ‘published’ Imperial prints were announced in the New York Times on August 11, 1858: ‘Brady has just commenced the publication of a series of imperial photographs. The first of the series is an excellent portrait of John J. Crittenden, of Kentucky’ … At 12 x 9 5/8 inches, they were smaller than Brady’s sumptuous Imperial photographs, and issued on paper mounts engraved with the Brady studio location and, sometimes, with the name of the figure pictured. In presentation and style, they resemble mezzotint portraits of earlier centuries. A reduced step from the custom Imperial portrait, though still a photographic process, this new ‘imperial’ format could be mass-produced by the studio and sold commercially to anyone who might like to own a portrait of a famous American statesman” (New York Historical Society).

This is a fine Mathew Brady portrait of a giant in American financial history.

This photograph is offered as part of the "Team of Rivals" collection, for sale en bloc only