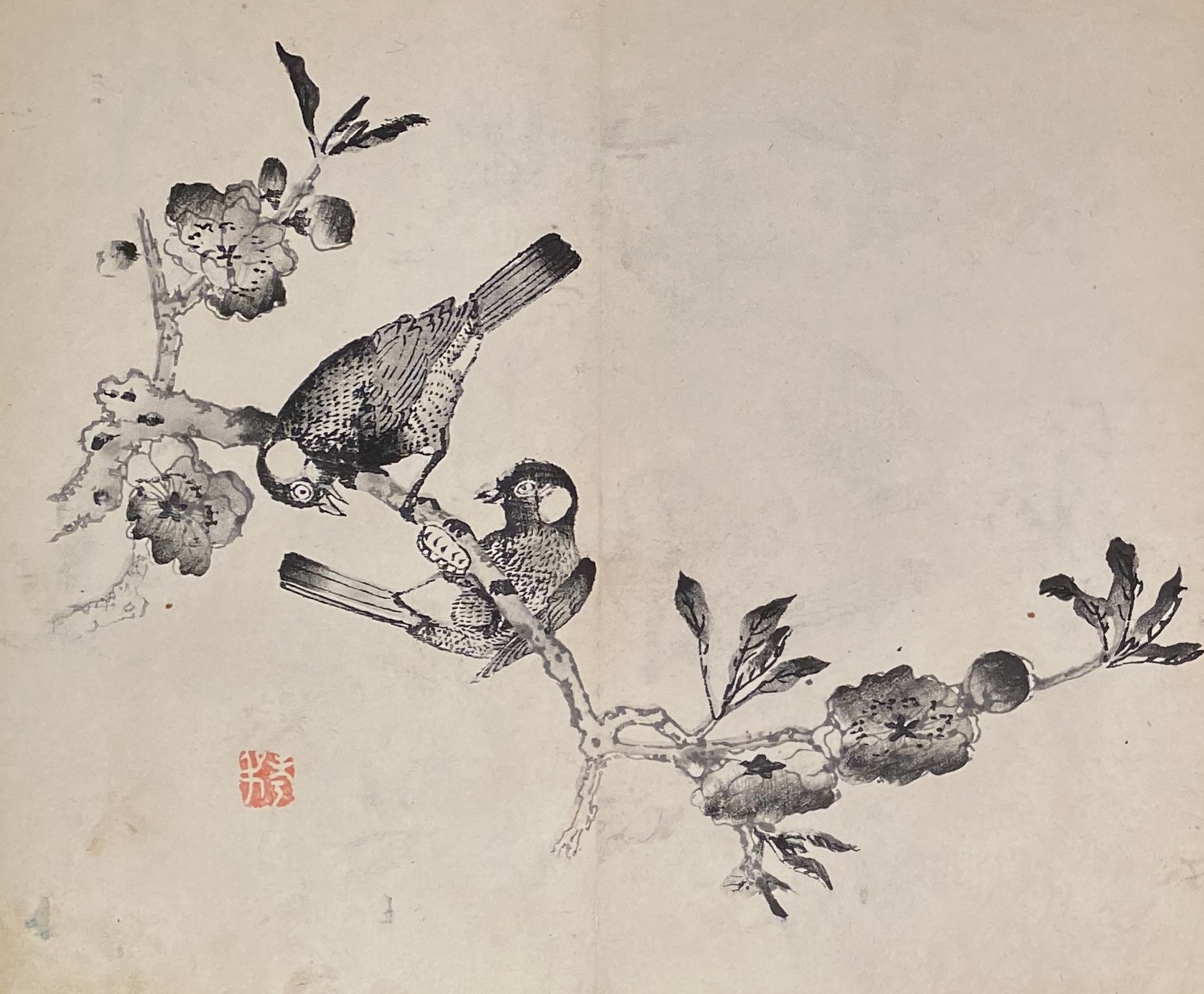 FIRST EDITION, second superstate, of the Ten Bamboo Studio Collection, “perhaps the most beautiful set of prints ever made” (Ebrey).

“The peak of technical achievement in Ming woodblock illustration was the production of colour illustrations. The process, known as ‘taoban’ (‘set of blocks’), involved the cutting of a separate block for each colour (up to ten blocks, each for a different colour, might be required for a single illustration). … This is the most important of the early colour-printed woodblock books, and it is the first of the painting manuals to use colour.” (British Museum).

The Ten Bamboo Studio Collection of Calligraphy and Painting was conceived by Hu Zhengyan, a skilled painter, calligrapher, seal carver, papermaker, and printer in Nanjing. “He persuaded some thirty painters and one hundred twenty poet/calligraphers to contribute designs. The resulting 356 leaves were organized into eight volumes, each focused on a category of nature studies: orchids, bamboo, plums, ink flowers (round compositions), scholar’s rocks, birds, and fruit, along with a general introductory volume. The series, possibly begun as early as 1619, was completed and published in 1633. Hu personally supervised the carving of the blocks and oversaw the printing, and he is given credit for introducing history-making innovations that served to make a woodblock print more closely resemble a hand-brushed painting. Shading, achieved by partially wiping color off an inked block, captures the effect of washes and varying degrees of pressure of the brush, while overprinting (overlapping different tones or hues of ink) produced a broader and more nuanced palette of colors” (Splashes of Color: Chinese Woodblock Prints from the You Wei Du Zhai Collection, Portland Art Museum, 2016).

“Many of the extant early copies of the Ten Bamboo Studio Collection were collected by Westerners with a fondness for and a tradition of collecting prints, and today copies of the book are found in many Western museums and libraries. Some museums in the West with major Chinese art collections have early leaves from the Ten Bamboo Studio Collection, while others have only late, inferior copies. In East Asia neither the Palace Museums in Taipei and Beijing nor the Shanghai Museum has early copies” (Ebrey).

The Ten Bamboo Studio Collection of Calligraphy and Painting is divided into eight sections: Miscellany (Paine’s vol. I), Orchids (II), Bamboo (III), Plums (IV), Round Fans (V), Stones (VI), Fruit (VIII), and Birds (VIII). Ebrey writes, “The Ten Bamboo Studio Collection consists of a pair of fascicles for each of eight subjects, with ten pictures in most fascicles; for seven of the eight subjects each picture is accompanied by a matching poem written out by a master calligrapher. The collection also includes additional leaves illustrating painting motifs, a general introduction to the whole work, as well as a preface to each subject.”

Provenance: John Story Jenks (1876-1946) of Philadelphia, Chinese art collector and banker, trustee of the Philadelphia Museum of Art; by descent in the Jenks family.

Thomas Ebrey, “The Editions, Superstates, and States of the Ten Bamboo Studio Collection of Calligraphy and Painting,” The East Asian Library Journal 14, no. 1 (2010): 1-119.

We are grateful to Thomas Ebrey for analyzing the contents of the present set. He notes, “Most of the leaves of the full set are there. Only the Orchid volume was completely missing, and it is the least appealing and the one whose blocks held up most poorly.” The present set, bound in four volumes, does not include the orchids but contains about 90% of the remaining leaves. A detailed list of contents is available.