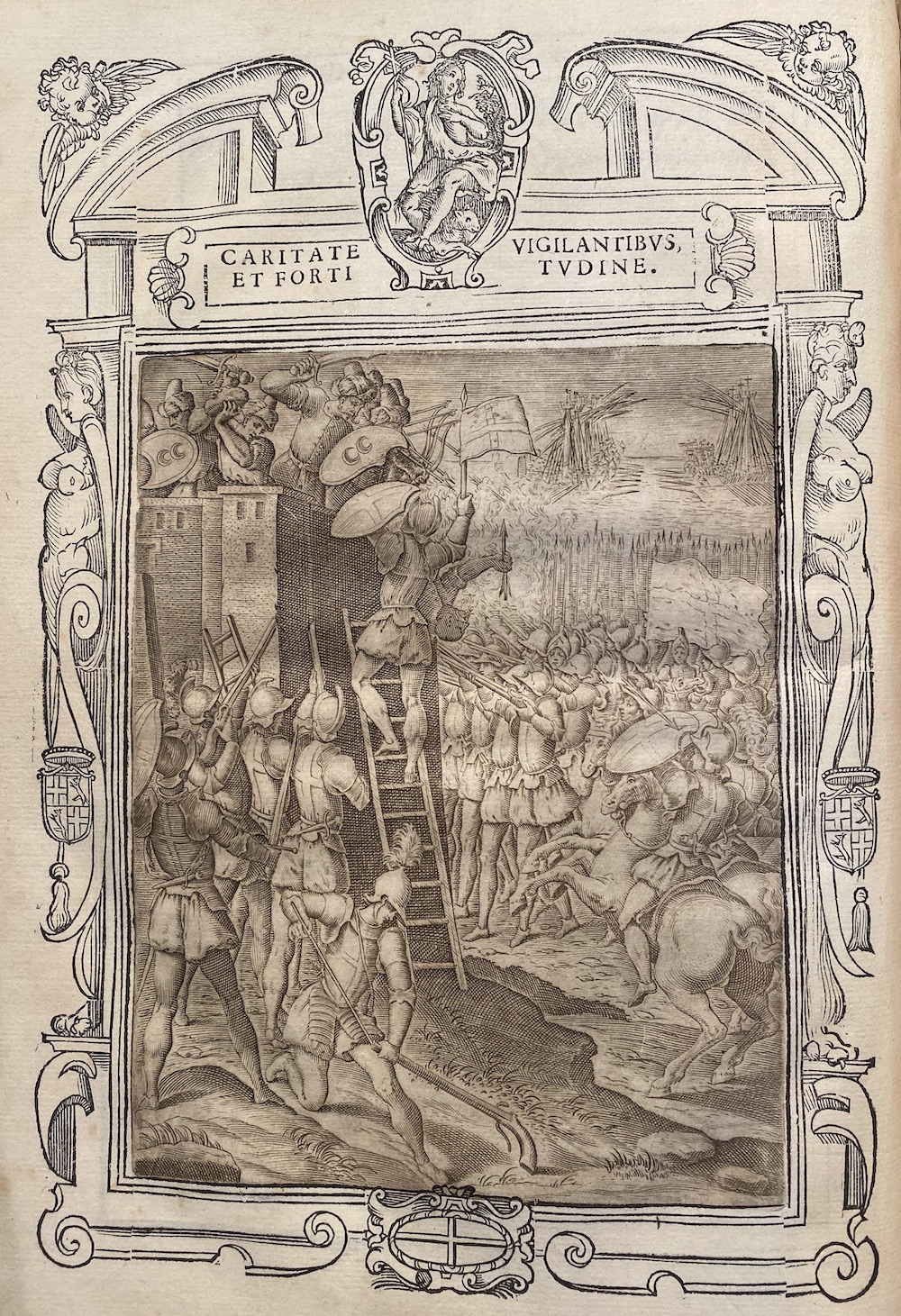 “the most beautifully produced collection of statutes in Western culture”

Folio. [4], 203, [17]pp. Engraved title-page, 16 engraved plates, 20 engraved text illustrations within woodcut borders. The illustrations include two maps of Malta, medallion portraits of leading figures in the order, and scenes representing the order’s tenets and goals. Near-contemporary blind-ruled calf over wooden boards. Wear and worming to binding, remnants of leather clasps, spine ends chipped, the binding sound. Worming to the first part of the book. Lacking 3 preliminary leaves, as in the Macclesfield copy, the catalogue of which noted “not present in all copies.” A good copy in an early binding.

FIRST EDITION of this revision of the Statutes of the Knights of the Order of St. John of Jerusalem. Established in 1085 to care for the sick at the Hospital of St. John in Jerusalem, the order became a military order, defending crusader territory in the Holy Land and protecting pilgrim routes. The Knights, drawn from the great families of Europe, became immensely  wealthy. They relocated to Malta in 1530, where they were ruled by a Grand Master answerable only to the Pope. The engraved map of Malta shows the great siege of 1565 in which knights under John de Valetta defeated a great Turkish fleet. This event led to the alliance of the kings of Europe against the Ottomans, previously thought nearly invincible.

“This book is perhaps the most beautifully produced collection of statutes in Western culture. Its original illustrations integrate woodcuts and engravings, and its type is beautifully designed. The purpose of the book was to aggrandize the power and authority of Grand Master of the Order of the Hospital (also known as the Knights of Malta or Knights Hospitaller), Hugues Loubens de Verdalle (1581–95). Verdalle became grand master at a time when the office was increasing in prestige and authority, both over its own knights and the people of Malta. The Order of the Hospital received favorable recognition, money, and new recruits after its successful defense of Malta against the Ottoman Turks in 1565. The order’s success, however, created internal tensions between the veterans and the ‘new’ members, who rebelled against the grand master in 1581. When Verdalle became the next grand master of the order at the turn of the year, he established Malta as a sovereign state, independent of European meddling. He used art, architecture, and, as here, the book arts to demonstrate to his order and to the rest of Europe the power and authority of the grand master” (Library of Congress).

“Although the revised statutes of the Knights Hospitallers had been approved in March 1586, their publication was delayed for two years until the appearance of this handsome and copiously illustrated volume, edited by Giovanni Battista Rondinelli. It is evident from the presence of Hugues de Loubens-Verdale as cardinal, an elevation that did not take place until December 1587, in a number of plates, that the eventual execution of the work was not fully formulated until the year of publication. However, the complexity of the production, particularly the integration of lavish engraved illustrations with woodcut borders, has resulted in a remarkable number of variant editions. The Macclesfield copy, along with a number of others recorded, contains neither the border nor the engraved illustration on H3v” (Macclesfield Library sale catalogue). The present copy does contain that illustration on H3v.