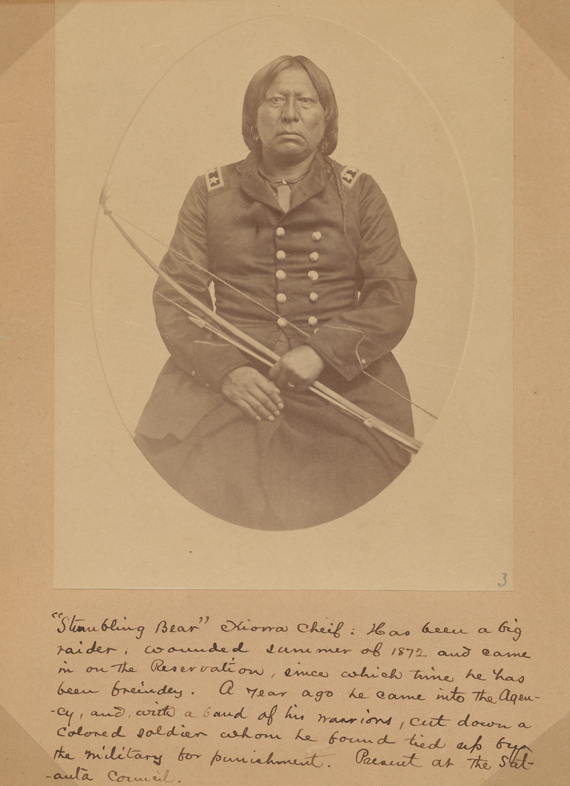 Photographer Will Soule arrived at Fort Sill in Indian Territory in late 1869 or early 1870. Fort Sill was then a military headquarters and agency for several Indian tribes, including the Kiowa.  Before returning to Boston in 1874, Soule made an important series of Native American portraits, including this charismatic image of Chief Stumbling Bear.

The Kiowa chief Stumbling Bear (Setimkia) was an influential war chief and raider in the Southern Plains. In 1864 he successfully defended a Kiowa camp from a cavalry attack led by Colonel Christopher (Kit) Carson. Stumbling Bear was present at the signing of the Medicine Lodge Treaty in 1867, and he became a leading advocate of peace with the whites. In 1872, he went to Washington D.C., with a delegation of Kiowa chiefs who sought peace. In 1876, the federal government built a home for Stumbling Bear on the Kiowa reservation at Fort Sill.

The contemporary manuscript text underneath the photograph attests to Stumbling Bear’s peaceful nature at this period: “Has been a big raider, wounded summer of 1872 and came in on the Reservation, since which time he has been freindly [sic].” It adds that “A year ago he came into the Agency, and, with a band of his warriors, cut down a colored soldier whom he found tied up by the military for punishment.”

When he died in 1903, he was the last surviving Kiowa chief from the days of raiding the Southern Plains.