HOME  >  Browse  >  Rare Books  >  Landmark Books  >  The Federalist: A Collection of Essays Written in Favour of the New Constitution 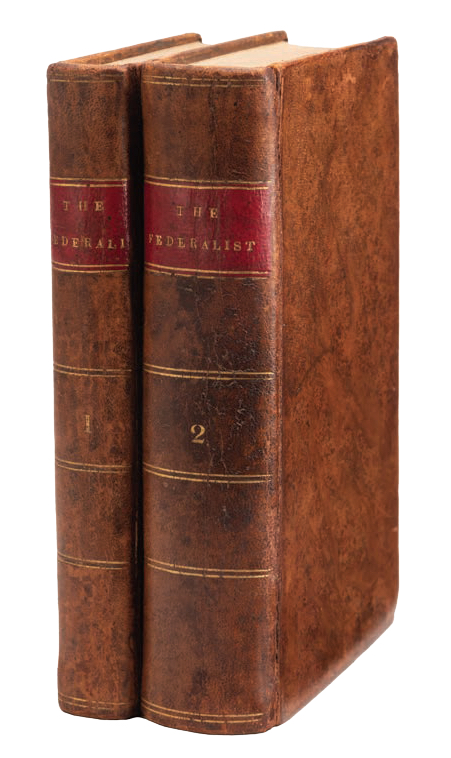 HAMILTON, ALEXANDER, JAMES MADISON, and JOHN JAY.. The Federalist: A Collection of Essays Written in Favour of the New Constitution

First edition. This splendid example of The Federalist is one of a very small number of special deluxe copies printed on thick paper.

Upon receipt of his thick paper copy, George Washington wrote, “When the transient circumstances and fugitive performances which attended this Crisis shall have disappeared, that work [The Federalist] will merit the notice of posterity; because in it are candidly and ably discussed the principles of freedom and the topics of government, which will be always interesting to mankind so long as they shall be connected in Civil Society.”

The Federalist is the most important book in American political philosophy. It is the fundamental document left by the framers of the Constitution as an expository guide to their philosophy and intentions. “These men saw a strong central government as essential to the maintenance of a stable economy. Their conservative views regarding property rights have had a lasting effect on U.S. Constitutional law. As a commentary on the Constitution by men included among its principal architects, The Federalist has been used … as an interpreter of the constitution not only by laymen but by lawyers and justices of the U.S. Supreme Court” (Printing and the Mind of Man).

Seventy-seven of the eighty-five Federalist papers were printed in newspapers between October 1787 and August 1788. The final eight papers first appeared in the second volume of The Federalist, published in two volumes  in 1788 by John and Andrew McLean in New York. The work was originally known as The Federalist; the title The Federalist Papers did not emerge until the twentieth century.

“The Federalist stands third only to the Declaration of Independence and the Constitution itself among all the sacred writings in American political history” – Clinton Rossiter.

Printing and the Mind of Man 234. Grolier American Books 19.